Jim Cullen, Review of Timothy Noah's "The Great Divergence: America's Growing Inequality Crisis and What We Can Do About It" (Bloomsbury, 2012) 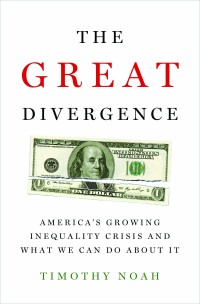 Jim Cullen, who teaches at the Ethical Culture Fieldston School in New York, is a book review editor at HNN. His new book, Sensing the Past: Hollywood Stars and Historical Visions, is slated for publication by Oxford University Press later this year. Cullen blogs at American History Now.

Timothy Noah is a reasonable person. Like many reasonable persons, he tries to bring people around to his point of view -- a point of view informed by statistics and expert opinion -- by supporting it evidence and anticipating objections. This is typically how informed analysts like himself assert the reality of climate change, for instance. It's also why people like him are sometimes baffled by the indifference, if not hostility, with which their opinions are met. It's not that they don't comprehend denial or cynical short-term self-interest. But can't their fellow Americans understand this is serious -- and that in the long run (which really isn't all that long) indifference and cynical self-interest are naive?

Noah believes they can understand (or at least some people can, and will). And so in The Great Divergence he marshals a great deal of evidence and sculpts it into an impressively svelte book to demonstrate that income inequality in the United States is real, growing, and dangerous.  I believe him. Of course, I believed that income inequality is real, growing and dangerous before I ever picked up the book, and in this regard I'm like most of the people who will ultimately read it (or previously read the essays from Slate on which the book is based). Which is not to say that I didn't learn a good deal from him: I gained more clarity on which societal forces explain income inequality more credibly than others (women in the workforce and immigration are not really major factors, while the increasing costs of college education, the decline of unions, and Republican presidents really are major factors). Noah understands perfectly well that many of the measures he advocates, like raising taxes, re-regulating Wall Street, and improving education, are not likely to happen overnight. But as he shrewdly asserts, one need not have a detailed blueprint for every proposal, nor hope to resolve every issue, to still assert that problems are real and can at least be ameliorated. The Buffet Rule raising taxes on "millionaires and billionaires" (to quote President Obama's favorite meme of the moment) would not come close to erasing the national debt. But it's still a worthwhile start.

What leaves me a bit restive about The Great Divergence is his underlying notion that educating the public is going to make much difference at this point. If charts and exposition could make income inequality an irresistibly evident problem, it would have long since done so -- if not in 1973 or 1983, then by 1993 or 2003. Actually, the reality of the problem is virtually beyond dispute by now: the book opens with an admission from George W. Bush (!) that income inequality is a real and increasing. But that didn't mean he or the tens of millions of people who voted for him believed he should have done anything about it. Or that Obama should now.

In part, that's because no one can be certain why economic inequality has happened -- or, more to the point, whether attempts to fix it will do more good than harm. Noah notes that for a long time economists and political scientists resisted believing that government action affected income distribution. Now, he shows, that skepticism is disappearing. It doesn't quite seem intellectually bankrupt to wonder if economic opinion like the New England weather: if you don't like it, wait and it will change. And even if you can prove that the globe is getting hotter or income inequality is increasing, why should I think that authority Z's solutions are better than any other? Is it really impossible imagine a sober (social) scientist discovering that when levels of variable A reach B, then carbon dioxide levels may actually start to go down because of heretofore undiscovered factors C that will cumulatively have an unexpectedly large and positive impact on D?. How many times have you read a sentence like, "Economists/biologists/whatever used to think E, but now we understand F"?

Let me repeat: I believe Noah is right. The stories he tells with graphs and facts and expert opinion -- stories which in their broadest outlines I've heard before, though stories that are here succinct and sometimes vibrant -- are compelling and buttress the anecdotal view of the world I get from Paul Krugman's columns and books like Barbara Ehrenreich's Nickel and Dimed, which lodge their way into your conscious (and conscience) and stay there. I also believe that many of the people who say Noah is wrong are rationalizing their desire to ignore him and others like him. But all the economic statistics in the world are not going to convince those people. Of those that remain -- of those who really are open to having their minds changed -- I doubt there are many who will be converted by the largely liberal body of opinion that's surveyed here. Instead, they will likely need one of two arguments: 1) an appeal that rests at least as much on the heart as the head, a rhetorical equivalent of Uncle Tim's Cabin; or 2) a series of events, in all likelihood violent in nature, that dramatize the problem in ways that will really tranfix public attention.

Noah might well say that The Great Divergence was written in the hope that social reform would not need to rest on such volatile or tragic means. I understand and sympathize with that hope, even as I confess to a loss of confidence in this age of gridlock that these issues lend themselves to this style of discourse when it comes to issues like global economies or global climates, which are simply too big and dynamic to be understood with any certainty.

I realize I'm trying to make an oddly rational argument about the limits of expository reasoning. If I'm selling Noah and his readers short, or if you'd simply like to have your suspicions about inequality confirmed and explained, he's your man. If I'm right -- right about those limits, but also right in agreeing with his core message -- then he will yet have a day he can say to all who resisted his warnings, "I told you so." But I suspect he'll be too decent to gloat.