In the summer of 2008 my girlfriend and I flew to Idaho to pick up a 1980 Triumph Spitfire convertible that her father had lovingly restored and that we had deftly convinced him to sell to us.

The return trip to New York proved to be more arduous than the perfect, wind-through-the-hair, journey that we had envisioned before setting off; a car of twenty-eight years does not, perhaps, have the same want to drive across country that a man of twenty-eight years might. That being said, we were able to sputter our way across the country, taking in the sights that only a road trip through the United States can offer.

I had never visited the fabled home of Elvis Presley and had specifically mapped out a southern route for our trip.

Upon entering Graceland for the first time I was struck by how it felt less like a museum and more like a home awaiting its owner to return from a long trip away. Graceland has an untouched yet looked-after feeling about it, as though if Elvis were to walk in, sit down, and flip on one of his many televisions, he would have no idea that thirty-five years had passed since he last inhabited the space. However, there is one part of Elvis’s home that reminds visitors that this homecoming will not occur: the sectioned off stairway to the second floor which leads to Elvis’s bedroom and the bathroom where he died on August 16, 1977.

How did he die? The pictures of Elvis in his later years tell most of the story -- he became a bloated, drug-addicted mess. His appetites remain legendary, for in addition to prescription drug abuse he was a prodigious glutton. Famously, he once flew from Memphis to Denver, Colorado solely to order his favorite sandwich from the Colorado Mine Company, a local restaurant -- it consists of an entire loaf of bread, an entire jar of peanut butter and an entire jar of jelly, and a pound of bacon. He was able to polish off several, along with champagne. 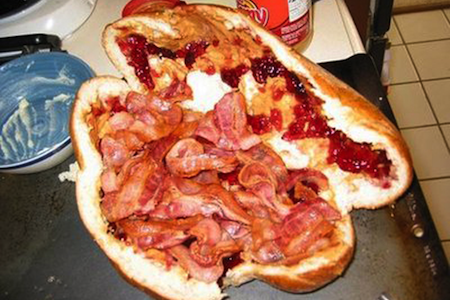 Despite the various conspiracy theories about his death -- supposedly he faked his death so he could enjoy his remaining years free from fame -- the simple fact is that no person can eat like that for long and expect to live.

So sorry, hepcats, The King really is dead.