This Veterans Day, Beware the Dangers of Robot War

William Astore teaches History at the Pennsylvania College of Technology. He retired from the Air Force as a lieutenant colonel in 2005, having taught at the Air Force Academy as well as the Naval Postgraduate School. He writes regularly for TomDispatch.com and History News Network. Cross-posted from the Huffington Post. 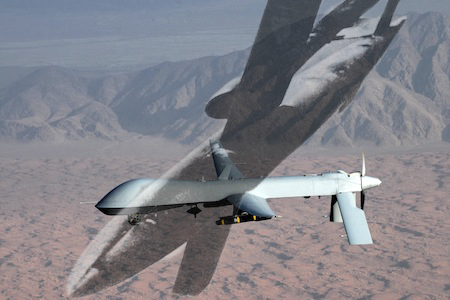 On March 9, 1945, my father wrote home about an Army video that featured Nazi Germany's latest wonder weapons. My dad had seen tanks and artillery and mortars and machine guns firing, but he had never seen these newfangled Nazi "vengeance" weapons. In his words:

In a movie short they showed the German V-1 robot, jet-propelled bomb. It's really uncanny how the darn thing goes through the sky. Also showed the damage they caused, which is really terrific. If they have another war, after this one is finished, the United States won't have to worry about sending troops overseas. With the progress that they could make in twenty years all we'll have to do, also the attacking country, is to send the flying bombs over the oceans and on to the targets.

The future is now, Dad. America's robot bombs, mainly Predator and Reaper drones, crisscross the skies in far off corners of the globe, reducing if not yet eliminating the need to send U.S. troops overseas. Americans, so critical of the fiendish robot bombs of Nazi Germany of yesteryear, are generally supportive of these robot drones, confident in the belief that only terrorists are being reduced to bug splat. Such uncritical praise was highlighted in the final presidential debate, with Mitt Romney commending Barack Obama for his fervid embrace of drones.

But robot drones, as Alfred McCoy suggested recently at TomDispatch.com, are neither benign nor truly decisive. Even GPS-guided bombs can miss their targets, or hit the wrong ones due to faulty intelligence. Even as their sensors provide an illusion of "total situational awareness" (a favorite U.S. military fantasy), high-tech drones are already threatening our privacy as they're deployed to patrol our own skies.

Technology is both overhyped and misunderstood in America, and that applies particularly to our enormous investment in military technology. In each of the last three years, the Department of Defense has spent an average of $75 billion just on research, development, test and evaluation (RDT&E) of weaponry and related equipment. Adding the RDT&E efforts for the CIA, related intelligence agencies, the Department of Homeland Security, the Department of Energy (for nuclear weapons), and various "black" (highly classified) programs would raise this to the neighborhood of $100 billion per year.

But the bigger problem with our faith in advanced weaponry is not monetary but one of mentality. Robot weapons appear to provide a measure of control even as they promise predictability. They do neither. Instead, they disconnect us from war and the messy realities of killing even as they seduce us with false promises of rapid decision and favorable closure.

War is rarely amenable to quick solutions, technological or otherwise. It is simply too chaotic and unpredictable. Recall that the Civil War was to be settled in a single climactic battle, or so experts on both sides predicted in 1861. Dismissed as crazy were men like William T. Sherman, who (rightly) predicted years of bloodletting. Similarly, during the opening days of World War I in August of 1914, friends advised Edith Wharton in France to cross the Channel to England "till the war was over," by which they meant that October. They were close on the month but wrong on the year; the war dragged on hideously for four more years, producing hecatombs of dead until the bloody curtain crashed down on November 11, 1918.

Think here of America's most recent (and ongoing) war in Afghanistan. Codenamed Operation Enduring Freedom, or OEF, it started with a rout of the Taliban which led to a decade of stalemate and conflicted results. Blitzkrieg victory morphed into OEW, or operation enduring war.

Our government should hardly need reminding of how unpredictable war is, and how intractable it is to technological solutions, whether of yesterday's Nazi "Vengeance" variety or of today's robotic "Reaper" variety. But hope in weapons springs eternal within militarized Washington corridors, especially when one has a monopoly on them. Tempting it is to send our latest and greatest generation of robot bombs to smite our enemies; that is, until they start sending their robot bombs against us.

To return to my father's letter: Note how my dad in 1945 had assumed that the American military of the future would use robot bombs only in response to an aggressor who employed the same. In his eyes, the America of 1945 was not a war-seeking nation. Nor would the America of 1965 become such a nation, or so he believed. But that very year President Lyndon Johnson and his Wise Men, with all the wonder weapons of their generation, escalated in Vietnam.

This Veterans Day, we need to turn away from the false promise of robot weaponry. For if we continue our infatuation with robotic spy and killing machines, we simply cannot with any degree of confidence predict a better and more peaceful future.