Is Christmas a Pagan Holiday?

Stephen Mitsuo Higa received his PhD from Brown University in 2012. He teaches at Bennington College in Bennington, Vermont. 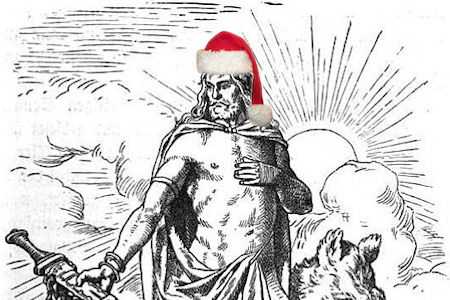 Recently, a student in my medieval religion class sent me this article by writer Tiffany Willis: "For Christ’s Sake, Leave The ‘Christ’ Out Of Christmas." In it, she argues that most of what we know of as "Christmas," from the December 25 date to the Christmas tree, actually have pagan origins.

Of course, I can appreciate Willis’s desire to detach herself from those things that obscure true religion.  Her heart is in the right place.  However, as a medievalist, I have some serious reservations about the things she says.

Now, this tiring “Christmas is a pagan holiday” stuff goes around every year, but most of the assertions that accompany it (like kissing under the mistletoe is a druidic fertility ritual) are never backed up by historical evidence:  we’re just never informed where these assertions come from.  This is because the historical evidence for non-Greco-Roman pre-Christian European religions is scant indeed.  What we have been able to piece together comes mainly from the following:

1) Archaeological evidence. These are things like the horned figure identified as “Cernunnos” on the first-century Gallic “Pillar of the Boatmen.” Who was Cernunnos? A deity? A spirit? A folkloric figure?  No one knows.  Archaeological evidence by itself is simply too mysterious. But sometimes interesting albeit tenuous connections can be made, like the connection made in the 1870s by William Hennessy between the “Cathvbodua” inscribed on another Gallic pillar and the “badb-chatha” (“hooded crow of battle”) in the Tochmarc Emire, an Irish story found in a fifteenth-century manuscript but possibly dating from as early as the eighth century.  It should be obvious that making such connections between iron-age Gallic carvings and medieval Irish literature (sources separated by centuries and hundreds of miles) is a practice that can easily become irresponsible.

2) Greco-Roman ethnographies. When Julius Caesar went to Gaul to battle the Gallic Celts in 58 BC, he recorded an account of his exploits in his Commentaries on the Gallic War. In these commentaries, he gave a description of Gallic society that includes our first major description of the Druids, the religious and legal elite of Gallic society. Most modern historians judge his account exaggerated, suspect, or even completely fabricated. Nevertheless, Greco-Roman accounts like this or those of Cicero and Tacitus may offer us tantalizing glimpses (through a glass darkly) of societies that left us no texts of their own.

3) Medieval condemnations of superstition. Even though most of medieval Europe was Christian, throughout the Middle Ages, church authorities lashed out against what they called pagan practices or superstitions in the Christian population.  It is worth noting that paganus is the Latin word for a rustic, country bumpkin, redneck, etc.  A “pagan practice,” therefore, can be interpreted to be any rural practice that failed to meet elite/educated/urban standards for good Christian behavior. For example, the ninth-century bishop Agobard of Lyons wrote a piece criticizing the local folk for believing in “storm makers” (people who had the ability to call down storms and ruin crops) and being terrified of mysterious airborne ships that would sail in to steal ruined crops away.  He wrote that such beliefs are to be rooted out and corrected because the Bible clearly says that only God controls the weather. Here, Agobard is clearly creating a category of belief (or, a category of difference/otherness) that is ascribed to ignorance and foolishness. These categories are meant to be erased through education and pastoral care. What we might call a “pagan belief” in storm magic is clearly more of a “rustic belief,” that is, a way that a rural/agricultural society dealt with the devastating natural disasters they could not control.

4) Medieval tales, myths, and legends. As part of the drive to compose and record vernacular literature that began around the twelfth century (think of troubadour poetry, the Poem of El Cid, the works of Marie de France, Dante, and Chaucer), some northern European cultures committed myths and legends to writing in their vernacular languages. For instance, one thinks of the Norse mythology contained in the thirteenth-century Icelandic Edda or the Irish mythology contained in several manuscripts of the twelfth and fifteenth centuries. These stories were composed or written down by monks and scholars, and it is difficult to say how or if these stories connect to pre-Christian beliefs. For example, the Tuatha Dé Danann found in medieval Irish texts are represented as ancient magicians in those texts;  however, some historians speculate that they may represent figures who were once deities.  How might one read these texts backward into the pre-Christian past? This process clearly presents problems.

5) Modern folklore and rural practices that seem pagan to us. These are things like tying ribbons to the trees around holy wells, making figures out of straw, hanging mistletoe. The sheer foolishness of randomly calling something “pagan” should be evident!

So, what does all this mean? Because we can’t really say with any specificity what pre-Christian religion was like, any attempt to designate something as “pagan” is less a statement about history and more a statement that reveals how we delineate religious categories. When someone says that such-and-such is a pagan practice, what you should hear them saying is “I think it’s a pagan practice because it seems naturey and folksy and rural, and how can Christianity be naturey and folksy and rural?” This is rather similar to how medieval clerical authorities designated something as “pagan” (or superstitious): it’s pagan/superstitious because it doesn’t accord with our (elite/educated/urban) vision of how we think Christians should be. In other words, to medieval people, “pagan” -- like “heretic” -- was essentially a category of difference/otherness, used by one segment of Christian society against another. Modern people who talk about Christmas trees being pagan are simply reproducing the rhetoric of these elite/educated/urban medieval church authorities. When they say something is pagan, they are claiming the right to define, legislate, and police the clean boundaries of Christian orthodoxy and orthopraxy, and to exclude those things that don’t fit their guidelines for inclusion. I don’t think that’s what people mean to do when they inform their friends that hanging holly is an ancient pagan ritual!

You may also notice that in Willis’s article -- as in most things like this -- all the pre-Christian religious practices of Europe and the Mediterranean seem to be lumped together under one "Paganism" as if it were one religion. Witness:  “To pagans and witches, red holly was a symbol of the menstrual blood of Diana, the queen of heaven.” What?

One thing that is useful about Willis’s article is that it’s true we don’t know when Jesus was born, and that December 25 probably does not fall on his actual birthday.  The question is, for a liturgical holy day, does that matter?

Happy holidays to everyone, and Merry Christmas to those of you who celebrate this “Pagan Holiday”!