The Civil Rights Movement as We'd Like to Remember It

Ron Briley reviews books for the History News Network and is a history teacher and an assistant headmaster at Sandia Preparatory School, Albuquerque, New Mexico. He is the author of The Politics of Baseball: Essays on the Pastime and Power at Home and Abroad. 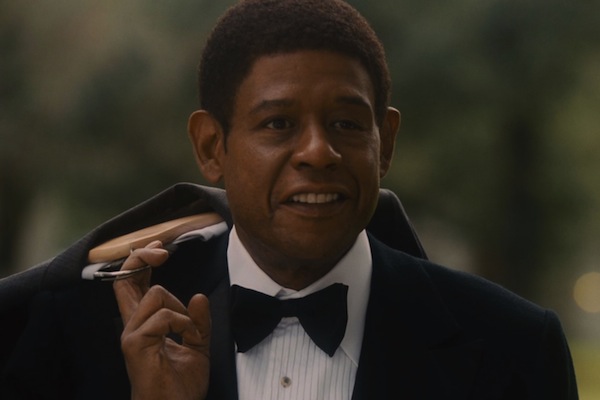 Releasing Lee Daniels’ The Butler in conjunction with the fiftieth anniversary of the 1963 March on Washington and Martin Luther King, Jr.’s “I Have a Dream” speech has proven to be a lucrative decision for The Weinstein Company; even maintaining a number one box office position over the Labor Day weekend against the film debut of One Direction -- the boy band which inspires so much teenage girl devotion. But it seems that we are in more of a historical mood this late summer, and The Butler delivers a feel-good history lesson which fosters complacency and ignores the difficult days ahead for continued racial progress.

The film is loosely based upon the story of White House butler Eugene Allen, who served numerous presidents during his long post-World War II tenure. For the film directed by Lee Daniels, Allen becomes Cecil Gaines (Forest Whitaker) and considerable liberty is taken with his family history. In the film, Gaines grows up in the 1920s on a Georgia cotton plantation where his mother is sexually abused and his father murdered by a white plantation owner. Cecil, however, becomes a domestic servant and learns how to please white guests. These skills will serve Cecil well as he departs the plantation and finds employment in a fancy Washington hotel. Cecil’s exquisite taste and willingness to avoid difficult political situations land him a job in the White House as a butler, serving American presidents from Dwight Eisenhower to Ronald Reagan. This job allows Cecil to support his wife Gloria (Oprah Winfrey) and sons Louis (David Oyelowo) and Charlie (David Banner). However, Cecil will come into conflict with his eldest son Louis, who emerges as an activist seemingly present at every key moment in the Civil Right Movement from the Freedom Riders to the Black Power of the Black Panthers. After considerable conflict, father and son are reconciled, and the film concludes with the election of Barack Obama -- the triumph of the civil rights movement which both black and white filmgoers may celebrate without confronting the continuing racial economic inequality, de facto segregation, and racial profiling which characterize contemporary America.

In the struggles between Cecil and Louis, the film addresses the historical dichotomy between Booker T. Washington and W. E. B. Du Bois -- seemingly finding merit in the arguments of both black leaders. Through hard work and eschewing political involvement, Cecil carves out an economic niche where his family has a degree of comfort, and he is able to send Louis to college. This relative level of security certainly came with a price as Cecil has to endure the indignity of presidents and White House officials discussing racial policies as if he were Ralph Ellison’s invisible man.

On the other hand, Louis is an activist who resents the compromises his father has made. The young man models the philosophy of Du Bois. After embracing the nonviolence of the civil rights movement during lunch counter sit-ins, Louis evolves into a Black Panther after suffering numerous beatings as a Freedom Rider. Louis, however, rejects the violence advocated by some of his Panther colleagues and leaves the group, making eventual reconciliation with his father possible.

The film certainly alludes to the government suppression which destroyed the Black Panther Party and its leadership, but The Butler does not want to antagonize white audiences with images of black violence. There is a brief scene of rioting in Washington D.C. following the assassination of King, but the depiction is that of mindless frustration. There is certainly no suggestion that the urban violence of the late 1960s might be construed as insurrections on part of the black population. And there is no consideration given to the Kerner Commission’s report that American will continue to be periodically plagued by racial violence as long as two Americas exist divided by race and wealth. The argument of some scholars that armed self-defense protected many participants, both black and white, in the Mississippi Freedom Struggle is also not part of the film’s message.

Instead, The Butler endorses the triumph of nonviolence and moderation. For example, Louis is initially drawn to Malcolm X’s criticism of the “house Negro” which he associates with his father. On the other hand, King (Nelsan Ellis) informs his assistant Louis -- a ubiquitous figure in the Movement -- that domestics have an honored place in black history. King insists that during slavery times, domestics were often the tricksters who used their somewhat privileged position to carry out slave resistance. This perspective certainly helps to pave the way for family reunification between Cecil and Louis.

Cecil also eventually recognizes the importance of protest. After leaving his White House position, Cecil joins Louis in a 1980s civil disobedience action against American support for the apartheid regime in South Africa, and father and son are both arrested. The politics of protest and nonviolence which proved so successful in the United States are now to be expanded globally.

Thus, The Butler embraces the policies of both Washington and Du Bois, culminating in a family reunion on the domestic level and nationally with the election of Obama. Cecil is able to see his son elected to Congress and a black man in charge of the White House. It is the triumph of both patience and activism that has led to the victory of the civil rights movement. While there is no denying the symbolic significance of Obama’s electoral success dependent on both black and white voters, this feel-good ending tends to downplay the economic and law enforcement issues with which we continue to grapple.

The Butler also appeals to white liberals with a tendency to downplay indigenous black resistance in favor of intervention by the national government to guarantee black rights. This perspective is evident in the film’s portrayal of the chief executives served by Cecil. Although he seems somewhat uncomfortable around black people, Dwight Eisenhower (Robin Williams) is depicted as doing the right thing by dispatching federal troops to Arkansas in support of school desegregation and the Little Rock Nine. John F. Kennedy (James Marsden) is portrayed as growing in his personal awareness of the indignities suffered by black Americans, and he conveys these feelings to Cecil. Yet, the reluctance of the Kennedy administration to endorse the March on Washington and confront segregationist Southern governors is less evident on the screen. Lyndon Johnson (Liev Schreiber) appears as a Southern politician who is not above using the “n-word,” yet his willingness to place his administration firmly behind such legislation as the Civil Rights Act and Voting Rights Act is acknowledged. In fact, near the end of the film when Cecil is preparing to visit the Obama White House, he carefully selects a tie clip given to him by President Johnson. Cecil seems forgiving of Johnson, whose willingness to sacrifice the Great Society upon the altar of the Vietnam War helped lead to the death of Cecil’s youngest son in that conflict.

Unsurprisingly, the treatment of Richard Nixon (John Cusack) is a little less flattering. While the Southern strategy pursued by Nixon is not fully developed, a scene is included in which he discusses FBI Director J. Edgar Hoover’s suggestion that the administration crush the Black Panther Party. In addition, Nixon is shown drinking heavily during the Watergate crisis. Presidents Gerald Ford and Jimmy Carter, however, are presented in archival footage, but it would appear that investigating the reaction of a Southerner such as Carter to the black staff and civil rights movement in the 1970s would have contributed to the major themes of the film. Nevertheless, the depiction of Ronald Reagan has earned the greatest controversy. Reagan supports the efforts of Cecil to gain equal pay for the black staff, and he even invites Cecil and his wife to a White House function. Yet, Reagan is unable to connect personally with Cecil, and the butler retires and joins his son in protest over dissatisfaction with Reagan’s continued support of the apartheid regime in South Africa. Defenders of Reagan assert that the president was opposed to racism but feared communists coming to power in South Africa if the apartheid government collapsed. This debate, however, ignores the racial insensitivity of Reagan in opening his 1980 campaign in Philadelphia, Mississippi where civil rights workers were murdered in 1964, and his constant racial stereotyping with euphemisms such as “welfare queens” as he appealed to disgruntled white working class voters.

In the final analysis, The Butler seeks to appeal to our better nature by depicting a heroic civil rights movement supported by liberal activist presidents which culminates in a racial environment where a black man may be elected as President of the United States and the philosophies of Washington and Du Bois united to foster a better society for black Americans. This is a feel-good movie about our history which has resonated with film audiences and celebration of the March on Washington. Yet, The Butler may also encourage a degree of complacency as we have endured a laborious journey, but we still have a long way to go to attain the mountain top and achieve the dream articulated by Martin Luther King, Jr.