The Los Angeles Times reports that Hugo Schwyzer, the embattled gender studies professor at Pasadena City College, has resigned from the school after nearly a month in administrative limbo.

What a long, strange trip it's been. (Full disclosure: Schwyzer contributed to HNN's Cliopatria blog way back in the mists of time of the mid-2000s.)

His dismissal came after a year of damaging revelations.

At the end of July, Schwyzer publicly melted down on Twitter, describing himself as an egomanical fraud who “had no business teaching feminism.” (Schwyzer received his B.A. from UC Berkeley and his PhD from UCLA.) 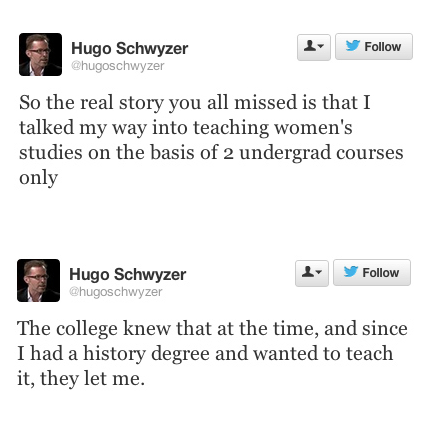 Schwyzer also apparently attempted suicide on multiple occasions over the summer – he called the LA Weekly to inform them about an attempt on August 1 – and was recently arrested two weeks ago for causing a traffic collision while under the influence of the narcotic Klonapin (the other driver was seriously injured).

A message on his website states that “As of August 2013, Hugo is not accepting booking engagements and is on extended medical leave. He is in a well-earned state of disgrace.” Nevertheless, despite a self-imposed ban on social media and media appearances, Schwyzer's blog has been active well into September, even including a post on his DUI arrest, which has since been deleted.

A self-described male feminist, Schwyzer acknowledged in an 2011 interview with Feministe that he had (consensual) sex with his students at PCC during his years as a drug addict in the 1990s. Readers of the article critical of Feministe's decision to profile him quickly found a blog post written by Schwyzer in which he described a 1998 attempt to kill himself and his ex-girlfriend while under the influence of narcotics (the post has since been deleted).

Schwyzer has been a prolific media figure for years. He appeared on the Ricki Lake Show in 2005 to discuss his adult circumcision, at the age of 37, and his writing on sex and feminism has appeared in Jezebel, the Good Men Project, the Guardian, the Los Angeles Times, Alternet, and the Huffington Post.

Unsurprisingly, Schwyzer is now widely reviled within the feminist blogosphere. Some of his critics have set up a Tumblr, “Fuck No, Hugo Schwyzer.” His articles for mainstream feminist publications elicited extremely negative responses from readers, and detractors have turned Schwyzer's numerous glamor shots into a new Internet meme.