John Prados is a senior fellow of the National Security Archive in Washington, DC, and the author of more than twenty works of non-fiction. His current book is The Family Jewels: The CIA, Secrecy, and Presidential Power (University of Texas Press). 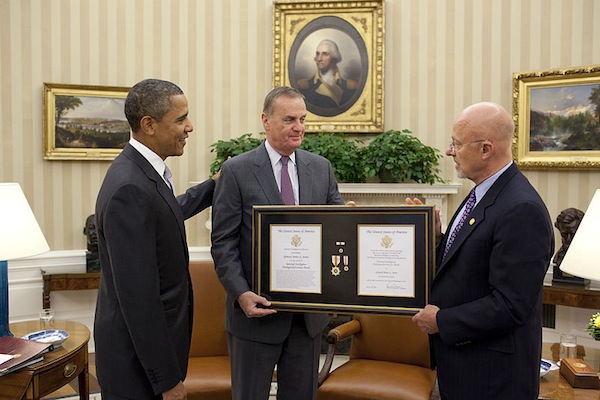 There is a clear pattern in the history of intelligence accountability in America. In each of the major seasons of investigation -- the Church Committee inquiries of 1975, the Iran-Contra affair in the late 1980s, the 9/11 Commission -- a moment occurred when the necessity for public investigation became blindingly evident.

The end of October 2013 will perhaps go down as the moment the scales tipped, making confronting the NSA and CIA abuses of our time inevitable. New intelligence agency snafus plus a succession of fresh revelations on the NSA scandal have compromised the spooks’ latest effort to close the barn door. An investigation of the intelligence agencies cannot any longer be avoided. President Obama would do well to pay attention.

October 29 was the day when General James R. Clapper, the director of national intelligence; and General Keith B. Alexander, the NSA director, went before the House Permanent Select Committee on Intelligence (HPSCI) to attempt to deflect increasingly serious charges of profligate, misdirected and uncontrolled espionage. The spooks could not have had a better venue. HPSCI chairman Mike Rogers (R-MI) is a strong supporter of the intelligence agencies and did his best at a preemptive defense before handing the floor to Clapper and Alexander. The intelligence chieftains then muddied the waters with new whoppers that will raise more hackles.

General Clapper told the congressmen that U.S. intelligence had indeed informed the Obama White House of its eavesdropping of foreign leaders. Though he kept his remarks as vague as possible, the director of national intelligence contradicted the White House position that President Obama knew nothing of the program. But the pattern in all the investigations of U.S. intelligence since 1975 has been that implicating the president pours gasoline on the fire -- and that presidents circle their wagons, throwing the spooks to the wolves.

In testifying that the White House knew about the wiretapping, Director Clapper was being accurate. National security staffs demand deep details on spy programs and specific attributions for information they are served. The president, for his part, could not have read the kinds of details about foreign intentions and leaders’ conversations without realizing they came from eavesdropping. But General Clapper’s remarks also indicate his own desperation..

In his earlier incarnation as the head of the National Geospatial Intelligence Agency, Clapper was in charge of analyzing the satellite photography during the Iraq War. He helped the Bush administration solve its quandary over finding no weapons of mass destruction by asserting the weapons were real but that they had been packed on trucks and convoyed to Syria. To cross the Obama White House now, pulling the president into the fray, suggests that Clapper needs the shield of presidential protection. Unfortunately for the spooks, history shows the White House behaves otherwise.

On the spying itself General Clapper – echoed by Representative Rogers – tried to present a “business as usual” defense, saying that espionage against foreign leaders figured among the first lessons taught in spy school. That is way too facile. The U.S. observes other lands, friends and foes, and collects vast amounts of information from open sources, diplomatic circuits, agents, and technical collection. Yes, the NSA worked to decipher foreign cable traffic to get inside the heads of other countries’ leaders, but the interception of personal communications was reserved for the most important perceived adversaries. During the Cold War those were Soviet leaders . Personal conversations offered unparalleled insight, and radio telephone transmissions were not as well-protected as other forms of communication. Was this spying extended globally simply because the NSA could do it? That meets the definition of profligate and uncontrolled espionage.

Was the spying purposeful instead? Public information so far is that this program began in 2002. At that time the President George W. Bush was trying to push a resolution through the United Nations Security Council to justify a U.S. invasion of Iraq. France was of particular interest because the French opposed the UN resolution. Germany had special importance because the Germans made a last-minute effort to broker an arrangement under which Saddam Hussein would go into exile rather than face an invasion. But even after the invasion the spying went on and the target list widened after the immediate need had been overtaken by events. The eavesdropping, misguided and gratuitous, continued uncontrolled – or, more likely, control was applied to expand the coverage. Secret knowledge is addictive. Either way you read the evidence the mavens of U.S. intelligence suffered from an excess of enthusiasm.

Director Clapper’s summary dismissal of the critics – tarring them with naivete by invoking the movie Casablanca to insinuate the spying is well-accepted spy and the objections foolish -- is belied by the very intensity of international concern. This issue is not going to go away.

General Alexander did his part, too. This time the NSA director asserted that news reports his agency had vacuumed up tens of millions of European telephone calls were “completely false.” Alexander attributed the interception activity to the French and Spanish intelligence services. Not only is there a slide among the Snowden leaked materials that documents the interception of tens of millions of communications in a period of just one month in France alone, it is already well established that regulations supposed to protect American citizens from this kind of interception do not apply to foreigners. The NSA has made that point repeatedly. The denizens of Fort Meade have few restrictions abroad save those related to U.S. persons, and given everything else that has come to light, there is no reason to suppose they have restricted their foreign activities.

In addition Director Alexander’s assertion opens the door to direct refutation by our allies and other nations. In defense of their own activities the French or Spanish intelligence services may well reveal that the NSA even assisted in their own eavesdropping. It is worth noting that the American ambassador to Madrid, James Costos, was summoned to the Spanish foreign ministry to receive a formal protest. The Spanish are not likely to have taken such action in a situation in which their own intelligence service is responsible.

Meanwhile a new front is opening in the Pacific, where Australia has admitted participating in the NSA spying, helping to gather intelligence from the airwaves in China and Indonesia. Beijing has issued a public warning that this espionage is incompatible with the Vienna Convention on diplomatic representation. The diplomatic damage increases daily.

On Halloween the Washington Post widened “Spygate” by offering a new expose that reveals NSA penetration of dedicated communications lines that link data centers run by Yahoo and Google. This offers access to the cloud-saved files of everyone who uses those services, including millions of Americans. Both Clapper’s office and the NSA issued strong denials of this story. But the leak included a program name, Project Muscular, supplied explicit details, and identified the British NSA counterpart, the Government Communications Headquarters, as having a parallel major role in the initiative. By now the credibility of the Office of the Director of National Intelligence and of the National Security Agency has fallen so low that few are likely to believe their denials.

All of this comes on top of the already-existing scandal of the NSA collecting the telephone metadata of all Americans. The picture that emerges is of a spy operation knowing no limits. The cost has been enormous, the benefits minuscule. Each new revelation shows anew that the spooks regard themselves as secret warriors ranged against a hostile world in which anyone -- everyone -- is the enemy. Spy chieftains like Clapper and Alexander often invoke national security as the justification for their activities, but the truth is that the mavens have placed national security above the national interest.

President Barack Obama faces a dilemma of leadership. If he does not now take strong, aggressive action to demonstrate his command, Obama will be saddled with culpability for these excesses. Moreover the White House will completely lose control of the situation. At the outset of Spygate, when generals Clapper and Alexander were caught in lies about NSA activities aimed at Americans, President Obama could have demonstrated his leadership decisively, forcing the resignations of both officers, terminating the program, and ordering a deep review of these activities. Instead Obama resorted to a milquetoast reassessment by the perpetrators themselves, designed to identify cosmetic reforms, and he disciplined no one. As a result he put the White House in danger. Obama’s political vulnerability increases with each new revelation. The old Watergate questions of “what did he know” and “when did he know it” assert themselves. Obama has reached a point where only public action can restore confidence.