A Vivid Look at Gay Life in Castro’s Cuba 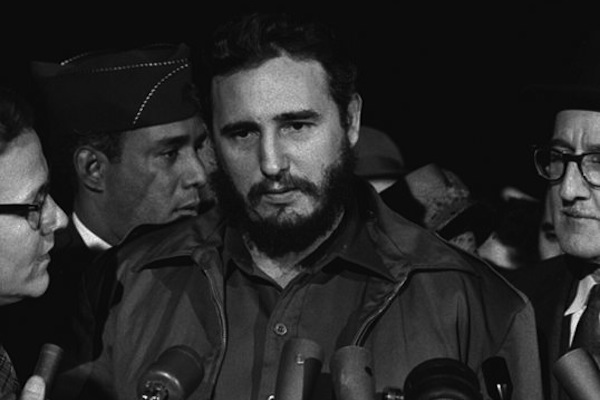 What a time for the premier of a play about gay life in Communist Cuba! New Jersey, right across the Hudson River from the theater that houses the play, just legalized same sex marriage and Russian President Vladimir Putin recently warned athletes headed to Sochi in February for the Winter Olympics not to protest for gay rights.

Strawberry and Chocolate is the sometimes charming, and sometimes alarming, story of a friendship between a gay artist and a straight university student in Havana in 1979, at the height of Fidel Castro’s power. It is a quirky, very personal play with superb actors that grabs you as soon as it begins and carries you along its many literary highways and byways. The play has just three performers, a run down two room set made to look just like run down Havana and graffiti strewn theaters walls; “Viva Fidel!” is emblazoned on one.

The drama puts the spotlight on the unforgiving Castro policy against homosexuality in the 1970s. Homosexuality had been a crime in Cuba since 1938 with those arrested given one month prison sentences. Governmental agencies ran programs against gays for years after Castro’s takeover in 1959, with the blessings of both the Catholic Church, very influential in Cuba, and the staunchly anti-gay Soviet Union. Internment camps for gays were set up in the 1960s and the government targeted artists and writers. Thousands of gay men and women were booted out of Cuba in the Mariel boat lift of 1980.

The Cuban government’s hatred of gays waned in the late 1970s. A new Ministry of Culture relaxed laws against them and they slowly gained more rights as the 1980s rolled on. In 2010, Fidel Castro told the Mexican newspaper La Jornada that he was wrong in his anti-gay policies. “Yes, there were moment or great injustice – great injustice,” he said.

Castro’s’ niece, Mariela, is now the head of Cuba’s National Education Center and has campaigned for more rights for gays.

Strawberry and Chocolate was written by Senel Paz and is based on his screenplay of a film version of the work, shown in 1993 (it was nominated for an Oscar for Best Foreign film). Eugene Nunez translated the play into English. The play is a much scaled down version of the film, with just a few characters on stage, as opposed to a pretty busy Havana neighborhood in the movie, but the power of the story remains the same.

The play asks common questions – can gays and straight men and women have deep friendships that do not involve any sex? Should a national government persecute gays? And, of course, why does everyone suspect two male friends who often live with each other have to be gay?

In the story, the gay Diego tries to seduce the straight David, whom he meets at a famed Havana ice cream parlor. David sees the gabby and overly friendly Diego as a Renaissance man and thinks he would make a wonderful friend, despite his sexual orientation, and follows him to his apartment. The men never get involved sexually, but develop a close relationship. Diego continually thinks they will be lovers. David unfortunately blurts out that Diego is gay to a pro-revolutionary police type character, Miguel, who sets a trap for Diego.

Will the two men stay friends? Will Diego be arrested? Deported? Imprisoned? Will gay life be tolerated in Cuba? Will official harassment get worse?

The play proceeds nicely, without any slow moments, with a lot of conversation and some brutal, unexpected violence. There are no women in it and none are needed. The play is quite enjoyable and you learn a lot of history about Havana and Cuba throughout its two acts. The irony is that today, twenty years later, life for gays is so much better in Havana and in New York, where the play debuted. Many battles have been won, although some remain.

Director Roger Robinson did a fine job of letting Paz’ story develop and built tension in all of the scenes. He received strong acting from AJ Cedeno as David. Roy Arias as Diego and Andhy Mendez as Miguel.