Scott McLemee is the Intellectual Affairs columnist for Inside Higher Ed. 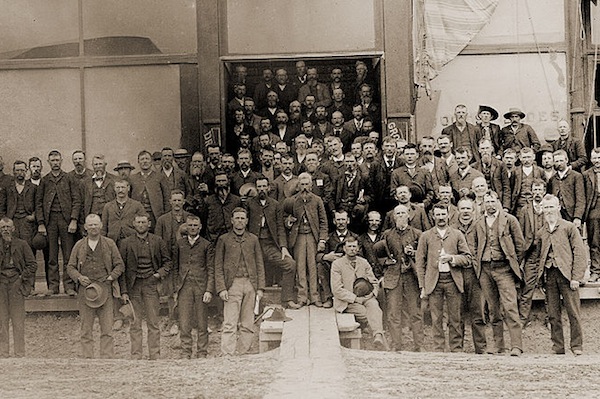 Nominiating convention of the People's Party in 1890. Image via Wiki Commons.

Cross-posted from Inside Higher Ed

It's not that often that an author has the pleasure of seeing the second edition of a book come out several decades after it first appeared. When that does happen, the title in question is probably a novel or a work of belles lettres, rather than a monograph. Rarer still would be the book that has become topical again in the meantime – pertinent to the stress and strain of public life, perhaps even more than it was when first issued.

So the 50th anniversary edition of Walter Nugent’s The Tolerant Populists: Kansas Populism and Nativism, now out from the University of Chicago Press, is an exceptional book on a number of counts. I’m by no means sure that the author, who is professor emeritus of history at the University of Notre Dame, would feel all that comfortable as a guest on one of those public-affairs TV programs where everybody yells, interrupting each other and stomping all over the fine points of any argument with cleated boots. He might get crushed.

But the book, which once intervened in a fierce historiographical debate, offers a challenge to how Americans understand and discuss politics now.

If taken seriously, Nugent’s book might do irreparable damage to a good deal of the prevailing nonsense, which is the sign of a career well-spent.

To put his contribution in context, we’d have to take a look back at a well-received and influential book published during the last really disastrous global economic crisis anyone alive still can remember. John D. Hicks’s The Populist Revolt (1931) stood as the definitive work on the subject almost as soon as it appeared in 1931 – the most comprehensive treatment, until that point, of the rise and fall of the People’s Party of the 1890s. Hicks treated it as a heroic if flawed challenge by Midwestern and Southern farmers to the economic powers-that-be driving them into the ground through tight credit, mortgage foreclosures, and monopolistic control of railroad shipping costs and the market prices of agricultural goods. The Populists (so dubbed, it is said, by a journalist with a little Latin) became a force to reckon with in some states, and their demand for reform to limit the power of monopolists and financiers resonated beyond the corn and cotton belts.

By 1896 the party had effectively fused with the Democrats – in roughly the sense, as one Populist put it, that Jonah fused with the whale. In the wake of FDR, the populists of the 1890s could be seen as proto-New Dealers. And so they were understood, in keeping with Hicks’s overall rendering of their history, for the next 20 or 30 years. But a revisionist perspective on the People’s Party emerged in the 1950s for which the Populists embodied something much more problematic: a mass movement animated as much by feelings of powerless rage as by rational economic concerns. Other figures worked out some of the argument before Richard Hofstadter published The Age of Reform (1955). But for the sake of convenience, and in recognition of the range and depth of his influence, we might as well call it the Hofstadter thesis. Aspects of it also appeared in his book The Paranoid Style in American Politics and Other Essays (1964).

In contrast to Hicks’s understanding of the People’s Party as an early force for progressive reforms (including the graduated income tax), the Hofstadter thesis saw populism as a reactionary response to industrial production, urbanization, and the role of the United States in the world market place. These forces were undermining the status of the independent, rural farmer – who responded with nativism, conspiracy theories, and a rather hysterical yearning to return to the fine old ways of the good old days. Hofstadter quoted anti-Semitic statements by populist figures, sounding like something from a speech delivered at the end of a torchlight parade in Germany circa 1932. While he stopped short of calling the People’s Party proto-fascist, Hofstadter did situate the populists in a continuum of episodes of irrational American civic life running from the Salem witch trials to McCarthyism. (More recent examples might be adduced here, of course.)

The revisionist perspective held that the populists of the 1890s were suffering from “status anxiety,” leading to political protest directed as much against cultural change as economic conditions. And if populists and McCarthyites alike were xenophobic, anti-intellectual, and belligerently nationalistic – well, in that case the Hofstadter thesis seemed to make some compelling points.

A very big “if,” that one. Hofstadter drew on then-recent psychoanalytic and sociological ideas, and wrote with such power and grace that the two Pulitzer Prizes he received (one of them for The Age of Reform) seem like a matter of course. But the doctoral dissertation that Walter Nugent wrote at the University of Chicago – published, two years after it was accepted, as The Tolerant Populists – went after the Hofstadter thesis with hammer and tongs on its one major weakness: the senior historian hadn’t logged much time in the archives.

Nugent did, and it shows. He focused on Kansas – the epicenter of the Populist political earthquake, where the movement began and quickly established the state’s second most powerful party. Besides analyzing the available demographic and electoral data for the 1890s, Nugent went over scores of newspapers, large and small, including papers published by and for the state’s German-language communities.

The picture emerging from his research is anything but one of close-minded and nostalgic people who gloried in their status as native Kansans, obsessed with bitter feelings about foreigners, paranoid about the outside world, and ready to take it out on immigrants in general or Jews in particular.

In fact the evidence shows, time and again, exactly the opposite. People’s Party organizers appealed for support from every immigrant group in the state and often won their votes. Populist speakers and editorialists were infuriated that Kansans were being dispossessed from their homes by foreign investors who bought up real estate on speculation. A basic populist demand was that the law should ensure that land would be held by people who worked it, but the hostility was directed at foreign landlords; the populists made no effort to restrict the purchase of land by the non-native born who wanted to farm.

The anti-Semitic rants that Hofstadter quoted from populist writings were indeed virulent, but Nugent reports finding only a few examples of anything like them out of the countless documents he read from Kansas. Attacks on the Rothschilds, an eminent Anglo-Jewish banking family, certainly did show up in Populist denunciations – as did similar denunciations of the Morgans and the families of various robber barons. Nugent points out that Jew-baiting and immigrant-bashing were far more common among mainstream politicians and shapers of elite opinion, and that one Jewish writer “had heard so little about Populist anti-Semitism that he sent the Populist governor [of Kansas]… a pamphlet beginning, ‘Moses, the Populist Law-Giver.’ ”

People’s Party candidates in Kansas included an African-American minister (for state auditor), a woman (for state superintendent for public instruction), and a Jew (for postmaster) -- plus too many recently naturalized citizens of German, Welsh, Irish, Swiss, Czech, and other stock, running for too many positions, to list.

Except for “a brogue here and an umlaut there,” says Nugent, they were no different from other Populists. The policies they championed – such as state ownership of railroads and telephone providers, inflationary monetary policies that would reduce the value of their mortgages, and laws prohibiting alien ownership of land – were in response to real economic hardship, not murky unconscious impulses or complaints about cultural disrespect.

“A strong assertion is easier to make than a strong case,” writes Nugent about the revisionists of the 1950s. Around the time The Tolerant Populists first appeared, Norman Pollack and C. Vann Woodward made broadly similar critiques of the Hofstadter thesis, with Michael Rogin continuing the challenge a few years later. But when Nugent took on the Pulitzer-winning historian in the early 1960s, it must have looked like David sizing up Goliath. By the end of the book, the giant has hit the ground but the counter-evidence just keeps flying.

In his preface to the new edition, Nugent makes a very quick sweep over developments in the historiography on populism in the intervening years (to do more than that would have undoubtedly required something as long as the original text) and fulminates over how imprecisely the word populism is used now. It “has become a useful word in dodging informed thinking,” he says. “In American media, it has become an all-purpose put-down.”

Worse, it is most often applied to phenomena, such as the Tea Party, which tend to be as nativist and prone to flight-of-thought as anything subsumed under the Hofstadter thesis. The common element in the reforms proposed by the Populists 120 years ago was, Nugent writes, “to use the government as an instrument on the people’s behalf, rather than on behalf of special interests, monopolies, unregulated banks and other corporations, and (to use today’s term) the one percent.”

The movement “wanted to augment the use of governments, not diminish or circumvent them, because, as the Populist congressman Jerry Simpson put it, ‘the government is the people, and we are the people.’ ”

I don’t know if “Sockless Jerry” would have much of a chance in today’s electoral arena, but sentiments like that wouldn’t get him many well-paid speaking engagements.