The Perpetrators of the Cambodian Genocide Are *Still* Eluding Justice

Khatharya Um is associate professor of ethnic and Asian American studies at the University of California, Berkeley. She is the author of numerous articles on post-genocide Cambodia. 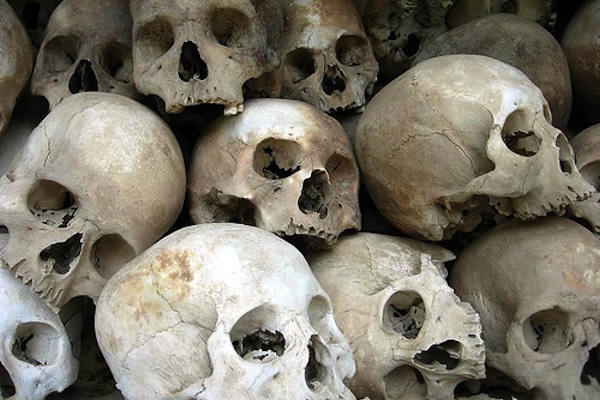 Remains of victims of the Khmer Rouge. Image via Flickr.

January 7, 2014 marked the thirty-fifth anniversary of the overthrow of the genocidal Khmer Rouge regime, during which almost two million Cambodians out of a population of seven million perished from torture, starvation, forced labor, deprivation-related illnesses, and summary executions. Just four days prior to the anniversary, in the face of a protracted mass mobilization against the current Cambodian People’s Party-dominated government in Phnom Penh, government security forces fired into a crowd of protesting garment workers, killing five protesters and injuring many more. The rights to assembly and to peaceful protest have since been suppressed, and leading regime opponents have been summoned to appear in court.

As thousands gathered at the Olympic Stadium to celebrate “Victory over Genocide Day,” one cannot help but wonder whether the country has effectively expunged itself of its violent history. There is no question that Cambodia has come a long way since the early 1980s, the first years after the genocide. Buildings and factories have sprouted over what were once the killing fields, and Phnom Penh, hollowed and depopulated under the Khmer Rouge, is now a bustling, chaotic city with restaurants and rooftop lounges that cater not only to foreign expats but also to a growing Cambodian middle class. With rapid growth, projected at 7 percent for 2014, the country’s economic prospects look bright. Along with economic liberalization, the United Nations brokered settlement and facilitated transition from communism have also seen to the establishment of a multiparty political system, re-insertion of both the monarchy and of Buddhism into the country’s political and cultural life, and an imported rights discourse.

While Cambodia today may be post-war, it is not post-conflict. Though the United Nations, with its massive presence of some 20,000 peacekeepers, was able to effectuate the political transition to a theoretical constitutional monarchy in the early 1990s, it was unable to fundamentally alter the governance structure or the prevailing political culture.  The Cambodian People’s Party, installed into power by the Vietnamese after its successful invasion in 1979, retains its political and military preponderance underscored by its ability to compel a power sharing in 1993 despite election results. The multiparty system, theoretically instituted in 1993, is essentially cosmetic, as the non-communist opposition was systematically and progressively diminished. The CPP has claimed victory over every single election over the last decade and a half. Indeed, CPP leader Hun Sen has served as Cambodia’s prime minister since 1985. The rhetoric of democratization quickly succumbed to realpolitik, and the international community, including the signatories to the peace accords, became implicated, in repeated instances, in condoning the continued viability of force in conflict resolution. Stability, defined here as the absence of war, rather than genuine democracy won the day.

The imprints of the genocidal era remain visible in Cambodia today.  Former high-ranking Khmer Rouge, including Hun Sen himself, fill the top echelon of the current government in Phnom Penh, while former rank-and-file cadres live side by side with their victims.  Politics thwart the quest for accountability. While the Vietnam-installed regime in Phnom Penh has often deployed the memory of the Khmer Rouge to legitimate itself, its position regarding the Khmer Rouge tribunal (KRT) has been to “bury the past” in the name of reconciliation. Amnesty was granted to the Khmer Rouge leaders whom the government had indicted in absentia in 1979. The genocidal history is also muted, reduced to a passing reference in the school curriculum; it was not until 2007 that the first textbook on this chapter of the nation’s history was produced.

Reconciliation, achieved through imposed national amnesia, trumped the need for justice and accountability.

Meanwhile, national memory is stripped to naked hatred, like the piles of bones stacked in glass casing at Cheung Ek, and evoked annually during the National Day of Anger.

The establishment of the Khmer Rouge Tribunal in 2006, three decades in the aftermath of the crimes, constitutes the longest delay in the history of such trials in the post-Cold War world, and was essentially the result of international pressure; the resistance of the Cambodian government is underscored by its reluctance to be forthcoming with its share of the funding for the tribunal.  Theretofore, at the cost of over $200 million, the highly politicized Extraordinary Chamber of the Courts for Cambodia (ECCC) has convicted only one Khmer Rouge leader.  Two principal Khmer Rouge, namely Pol Pot and Ieng Sary, have died without having to account for their crimes, and another, Ieng Thirith, Pol Pot’s sister-in-law and wife of Ieng Sary, released from accountability by mental incompetence.  Given the resistance of the Cambodian government, there is a strong possibility that the tribunal will not move beyond the ongoing clustered trials of Noun Chea and Khieu Samphan, the two remaining Khmer Rouge leaders on trial, whose fragile health may still allow them to escape judgment.

The genocide in Cambodia destroyed not just one segment or one layer of society but the entire fabric of society.  What needs to be rebuilt is not just the human resources that were decimated during the genocidal encounter but, perhaps more importantly, the moral foundation of Cambodian society. Toward that end, the KRT is necessary but not sufficient. In a post-genocide Cambodia where the median age is 23.7 years of age and almost one-third of the population under the age of fifteen with no memory or understanding of the genocide, the notions of justice and accountability for many Cambodians are informed not by what transpired over three decades ago but in their daily realities. Violence, both real and symbolic, tragically continues to be a stark feature of post-genocide Cambodia. It is part of the political landscape, manifested in large-scale political killings as we witnessed during and after the coup of 1997, and in the targeted murder of activists, journalists, and union leaders. It is also “normalized” in the lives of many Cambodians -- in the crushing poverty, in the worker exploitation by companies that supply giant multi-national corporations and the ever consuming Western market, in the acid attacks of young women forced into compromising unions by the absence of choice, and the trafficking of the country’s youth. It is in the forced evictions of families from their homes to make way for development, in the land grabs by the politically connected, and in the decisions of the court that recognizes not justice but power. The overwhelming majority of Cambodians have no faith in the country’s legal system. Most feel that justice is not accessible to them. If political maturation is measured by the acumen of the system to mask raw force by institutionalizing it, then the government’s effective deployment of the juridical process to persecute its opponents could arguably be received as a step forward.

The genocidal wounds will continue to fester as long as the rule of law remains elusive. When the courts are neutered and civil society stymied by intimidation and fear, when youths are recruited to inflict violence on unarmed women, children, and monks, we perpetuate the culture of impunity. The celebratory speeches of the Victory day cannot drown the funereal lamentations of the families of those killed in one of the most violent encounters in post-genocide Cambodia. The guns leveled at unarmed protesters sent a powerful and ravaging message to the post-genocide generations that force remains paramount. What they witnessed on January 3 evoked the history that many had not personally experienced, where violence was the sole instrument of governmentality, and where the silence of the international community is deafeningly complicitous as it was almost forty years ago.