John W. Dower is emeritus professor of history at the Massachusetts Institute of Technology. His books include Empire and Aftermath: Yoshida Shigeru and the Japanese Experience, 1878-1954 (1979); War Without Mercy: Race and Power in the Pacific War (1986); the Pulitzer Prize-winning Embracing Defeat: Japan in the Wake of World War II (1999); Cultures of War: Pearl Harbor / Hiroshima / 9-11 / Iraq (2010); and two collections of essays: Japan in War and Peace: Selected Essays (1994), and Ways of Forgetting, Ways of Remembering: Japan in the Modern World (2012). 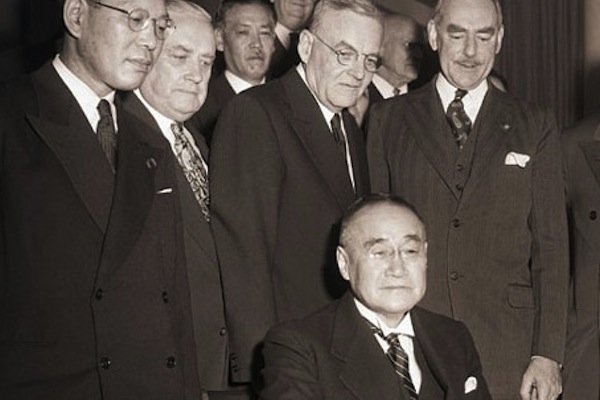 Editor’s note: This is part of a multi-part series on the legacy of the San Francisco Treaty system. The series is adapted from “The San Francisco System: Part, Present, Future in U.S.-Japan-China Relations,” published in The Asia-Pacific Journal http://japanfocus.org/-John_W_-Dower/4079. The article is itself adapted from John W. Dower and Gavan McCormack’s book "Japan at a Turning Point—Pax Americana? Pax Asia?," published in Japanese by NHK Shuppan Shinsho in January 2014.

Legacies of the past are never far from the surface when it comes to present-day controversies and tensions involving Japan, China, and the United States.

Take, for example, a single day in China: September 18, 2012. Demonstrators in scores of Chinese cities were protesting Japan’s claims to the tiny, uninhabited islands in the East China Sea known as Senkaku in Japanese and Diaoyu in Chinese -- desecrating the Hi no Maru flag and forcing many China-based Japanese factories and businesses to temporarily shut down.

Simultaneously, Chinese leaders were accusing the United States and Japan of jointly pursuing a new “containment of China” policy -- manifested, most recently, in the decision to build a new level of ballistic-missile defenses in Japan as part of the Obama administration’s strategic “pivot to Asia.”

And September 18 in particular? This, the Chinese were keen to point out, was the eighty-first anniversary of the Manchurian Incident of 1931 -- the staged event that the Japanese military used as a pretext for seizing the three northeastern provinces of China and turning them into the quasi-colony they renamed Manchukuo.

The disputed islands, the containment-of-China accusations, even the bitter “history issue” involving recollection of imperial Japan’s militarism all have toxic roots in the early years of the Cold War. Together with other present-day controversies, they trace back to the San Francisco System under which Japan re-entered the post-war world as a sovereign nation after being occupied by U.S. forces for over six years, from August 1945 to the end of April 1952.

The tensions of September escalated in the weeks and months that followed, and the alarm this generated was occasionally apocalyptic. Pundits spoke of “flash points” -- in this case, the Senkaku/Diaoyu confrontation -- that could lead to an “accidental war” in which U.S. forces supported Japan against China. This, it was observed, would be consistent with America’s obligations under the bilateral security treaty with Japan that lies at the heart of the San Francisco System.

That this worst-case scenario could be taken seriously in 2012 is both surprising and unsurprising. It is surprising because this was taking place forty years after both Japan and the United States belatedly normalized relations with the People’s Republic of China (PRC), dramatically abandoning the “containment” policy that had defined Cold War China policy prior to 1972. Over the course of those four decades, the economies of the three countries had become interdependent, seemingly creating a foundation for durable peace.

What makes the crisis of 2012 unsurprising, on the other hand, is the fact that China’s emergence as a major economic power has been followed by intense nationalistic pride coupled with resolute commitment to military modernization. This may have been predictable, but it nonetheless came as a shock to those who took the overwhelming military supremacy of the Pax Americana for granted.

The San Francisco System and this militarized Pax Americana go hand in hand. They have defined the strategic status quo in the Asia-Pacific area since the early 1950s. They have shaped (and distorted) the nature of the post-war Japanese state in ways beyond measure. They have involved both peace-keeping and war-making.

The San Francisco System takes its name from two treaties signed in San Francisco on September 8, 1951, under which the terms for restoring independence to Japan were established. One was the multinational Treaty of Peace with Japan that forty-eight “allied” nations signed with their former World War II enemy. The second was the bilateral U.S.-Japan Security Treaty, under which Japan granted the United States the right to “maintain armed forces … in and about Japan,” and the United States supported and encouraged Japanese rearmament.

Both treaties came into effect on April 28, 1952, the day the occupation ended and Japan regained sovereignty.

Two aspects of these agreements are notable. First is the timing. Japan was still occupied and under U.S. control when the treaties were signed, and the Cold War was at fever pitch. The Soviet Union tested its first atomic bomb on August 29, 1949, triggering the nuclear arms race. The victorious Communists proclaimed the People’s Republic of China on October 1 of that same year, and a Sino-Soviet Treaty of Friendship and Alliance was concluded on February 14, 1950. On June 25, 1950, war erupted on the divided Korean Peninsula, drawing in U.S.-led United Nations forces immediately. Four months later, in late October, Chinese forces entered the war to counter what China’s leaders perceived to be a U.S. threat to advance through North Korea up to—and possibly across—the border with China. The Korean War dragged on until July 1953, and the peace and security treaties of September 1951 were signed during a protracted stalemate in this conflict. (1)

Equally significant but less well remembered, the San Francisco settlement was a “separate peace.” The omissions from the list of nations that signed the peace treaty were striking. Neither Communist China nor the Chinese Nationalist regime that had fled to Taiwan were invited to the peace conference, despite the fact that China had borne the brunt of Japanese aggression and occupation beginning a full decade before Pearl Harbor and the U.S. entry into the war. Both South and North Korea were excluded, although the Korean people had suffered grievously under Japanese colonial rule and oppressive wartime recruitment policies between 1910 and 1945. The Soviet Union attended the peace conference but refused to sign the treaty on several grounds, including the exclusion of the PRC and Washington’s transparent plans to integrate Japan militarily into its Cold War policies.

Viewed from the perspective of the separate peace, the San Francisco settlement thus laid the groundwork for an exclusionary system that detached Japan from its closest neighbors. In the months following the peace conference, the United States tightened the screws on this divisive policy by informing a dismayed and reluctant Japanese government that Congress would not ratify the peace treaty unless Japan signed a parallel treaty with the Chinese Nationalist government in Taiwan, thus effectively recognizing that regime as the legitimate government of China. Failing this, the U.S. occupation of Japan would be perpetuated indefinitely. Japan acquiesced to this ultimatum in the famous “Yoshida Letter,” dated December 24, 1951 (from the Japanese prime minister Yoshida Shigeru to John Foster Dulles, the U.S. emissary in charge of the peace settlement). The ensuing peace treaty between Japan and the “Republic of China” ensconced in Taipei was signed on April 28, 1952 -- the same day the peace and security treaties signed in San Francisco came into effect.

The corrosive long-term consequences of this post-occupation estrangement between Japan on the one hand and China and Korea on the other are incalculable. Unlike West Germany in post-war Europe, Japan was inhibited from moving effectively toward reconciliation and reintegration with its nearest Asian neighbors. Peace-making was delayed. The wounds and bitter legacies of imperialism, invasion, and exploitation were left to fester—unaddressed and largely unacknowledged in Japan. And ostensibly independent Japan was propelled into a posture of looking east across the Pacific to America for security and, indeed, for its very identity as a nation.

(1) Great Britain, which formally recognized the People’s Republic of China in January 1950, supported PRC participation in the peace conference before bowing to U.S. pressure in July 1951. The ostensible reason for excluding Korea was that, as a Japanese colony, it had not been a belligerent party against Japan in World War II. On August 16, 1951, Zhou Enlai, serving simultaneously as foreign minister and prime minister of the PRC, released a statement criticizing the treaty and conference. South Korea also expressed outrage when informed it was being excluded. For China and Korea, see John Price, Orienting Canada: Race, Empire, and the Transpacific (University of British Columbia Press, 2011), 245-48.