Juliane Fuerst is a Senior Lecturer in Modern European History at the University of Bristol. 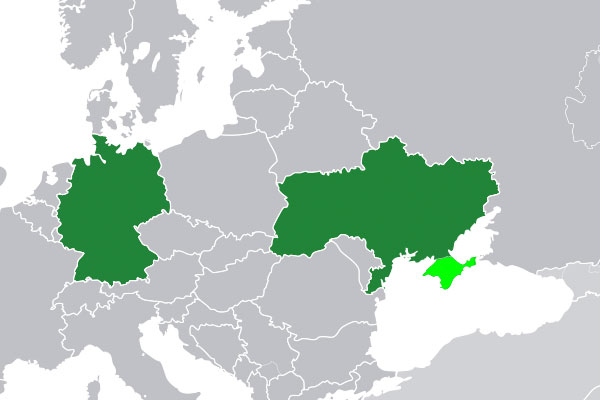 There is no other country in which the Ukrainian crisis triggered such a divisive and self-searching debate as in Germany. This is not surprising. Germany, Russia and Ukraine are tied to each other in an uncomfortable embrace of history, politics, economics and personal relations. Germany is Russia’s most important trading partner in Europe. It is the most dependent of all the Western European nations on Russian gas and oil. It exports more into Russia than any other EU country. It has established long-standing political ties. Germany’s ex-Bundeskanzler Schröder sits on the board of Gazprom and has been a vocal defender of his friend Putin in the last few weeks.

But the connection runs much deeper than that. Germany and Russia have often found common ground in history. Germany’s foreign policy has always harbored two competing camps: those who favoured stronger ties with the West and those who favored a German-Russian alliance. The Molotov-Ribbentrop pact was not conjured from thin air. It was at least partially rooted ideologically in the co-operation treaty of Rapallo of 1920 (which linked two countries shunned by the rest of the world and included a secret military assistance protocol) and the tireless work of Russophile diplomats such as the then ambassador Friedrich Werner von Schulenburg. Germany is the only country in the West, in which part of the population has shared a socialist past with Russia and Ukraine. Most importantly, however, Germany and Russia have been linked by a complicated nexus of historical shame, guilt and redemption. It is here that the Ukraine and the current crisis take center stage - and Putin is playing these sentiments with virtuoso.

Famously Putin spoke in German to the German Bundestag in 2001. Yet he started his speech in Russian, forcing almost all members of Parliament to don their headphones. This small but important detail was emblematic of the two-pronged approach Putin uses towards Germany – a country he knows, or at least believes he knows – well. Before he presented himself as the jovial Germanophile, capable of communicating with Germans in their own tongue, he established his credentials as Russia’s representative, one of the four powers that theoretically occupied Germany as late as 1989. In his recent pronouncements pertaining to the Ukrainian and Crimean question, Putin also uses a double discourse when addressing Germany. He conjures up the specter of fascism in the Ukrainian West – a term designed to stop any German response in its tracks – and he appeals to potential Germany sympathy for bringing fellow nationals back into the motherland. He simultaneously reminds Germany of their historical guilt and expresses understanding of at least part of their historical crimes. As a consequence, a schizophrenic situation has arisen, in which Putin enjoys support in Germany from the far left and the far right.

The terms fascism and fascist have been used by the Russian media from the very beginning of the Ukrainian protests (and was already in circulation to a lesser extent since 2004). It has been seized upon by the Western media and translated into German, English and other Western languages literally and without a moment of consideration that the term has very different resonances in different countries. But for different reasons in German and Russian the term serves the same function: in German, fascism, despite its etymological roots in Roman/Italian history, conjures up the Third Reich and its crimes. It is synonymous in common parlance with Nazism. Antifascism has been one of the main unifying banners of the left ever since the 1960s. It is shorthand for distinguishing between good and evil. In Russian, the term was already promoted during WWII as the main descriptor of the German invader in order to preserve the idea of an ideological struggle alongside national sentiment. With the incorporation of East Germany and other nations formerly linked to the Axis into the ‘socialist brotherhood’, the term became vital to distinguish between the good new allies and the evil agents of war. Hence in Russia too fascism represents a moral rather than political category. For both Germans and Russians the term is so emotionally loaded as to make debate over issues and people associated with it almost impossible. Over the last few years Russia has released a host of formerly secret documents, demonstrating the fascist nature of the Ukrainian nationalist resistance during and after the Second World War. A major trove of documents were made available this week. Rather than stimulating historical debate, this action is clearly aimed at shutting people up.  Especially those who speak Russian and/or German.

Putin’s second tier in addressing Germans and Germany is newer and represents a higher-risk strategy. The Western scholarly community was stunned when the insider and political scientist Andranik Migranian wrote inIzvestiia this week that if Hitler had limited himself to bringing ethnic Germans home into the ‘Reich’, he would now be considered a first-rate politician. The message seems to be clear. Putin’s actions are comparable to Hitler’s ‘good deeds’, which were accomplished prior to 1939. It is unlikely that this article would have appeared without clearance from above, meaning Putin himself. There was a glimpse of this message already in Putin’s speech after the annexation of the Crimea, in which he said that he hoped that Germans in particular would understand his decisiveness vis-à-vis the Crimea. In other words, Germans, who also struggle to find a civic rather than blood-related understanding of their nation, should support the imperative to bring ethnic kins back into the fold, even in the face of violation of international law.

One can speculate what motivated Putin to apply such a two-tiered approach to the German heart. Maybe it was his personal experience in East Germany, which famously harbored some of the most loyal and convinced anti-fascist communist leaders as well as a barely suppressed, simmering nationalist current among the populous, which exploded violently into the open with the fall of the wall. In many ways Putin’s calculations seem to be successful. The debate in Germany is heated and runs along relatively predictable frontlines with the far left, including the party representing the former East German communists, crying shame over the hypocrisy of the capitalists who initiated the wars in Iraq, interfered in the Kosovo and aggressively pushed Western economics and military right up to Russia’s borders. In a perverse case of self-flagellating narcissism, large parts of the German left are convinced that every Russian action must be a result of German aggression. Alice Schwarzer, Germany’s foremost old-style feminist, has joined the frame under this banner. The association of the Ukrainian revolutionaries with fascism has broadened this viewpoint far into the more moderate left. One should not forget that, at the moment, Germany also witnesses the so-called NSU trials. The investigation into the murder of nine foreign-born German residents at the hands of right-wing terrorists has uncovered a murky milieu, in which neo-Nazi sentiments and racist sentiments flourished. Yet it is precisely the representatives of this milieu, who also voice support for Putin’s action, due to his invocation of the Blut-und-Boden paradigm. And here too, the field has broadened into the middle ground. Just recently a group of German citizens, who identified as in the majority from West Germany, wrote an open letter to Putin, pledging their understanding and expressing hope that his speech from 2001 and its economic promises will further inform German-Russian relations. The topic of Putin’s policies vis-à-vis the Russian opposition is blended out, but the signatories are keen to establish their own humanitarian credentials, listing membership in the Christian peace initiative Pax Christi and, in the case of Maria von Choltitz, invoking her father’s WW II feats as ‘conqueror of the Crimea’  and ‘saviour of Paris’. Interestingly, the letter is also silent about the horrors the Ukraine – both East and West – suffered in the years of the war and after. Russia is the only Soviet successor state that is granted the right of victim status.

Yet Putin is not perfect in the way he plays with German sentiments. His views are clearly based on a German world that does not exist in precisely this way anymore. While Gerhard Schröder, with his classical style of social democratic politics and his political style of working with ‘comrades’, reaffirmed what Putin learned in East Germany, the ascent of Angela Merkel and the rise of the Green Party as a sizable political power means that German sentiments have become more complex. What the historian Wolfgang Schivelbusch has called the ‘Culture of Defeat’ has long served as Germany’s undisputed basis of foreign politics until unification and even beyond. Germany had clear lines of engagement on the foreign circuit, primarily determined by its experience as the defeated aggressor of the most costly and bloodiest war of the century. Yet Merkel is the daughter of an East German pastor, who engaged in oppositional activities against the SED regime. Her view of Russia is not informed as that of a victim of German aggression. At the same time, the classical left has basically ceased to exist as a powerful force. The Green Party has jettisoned anti-fascist rhetoric and asserted the right of the Ukrainian and Russian opposition against what they describe as an international bully. The antagonism between the German opposition parties (SPD, Greens and the Left) in this question has not only dashed hopes for a left-wing coalition against Merkel’s conservatives in the next Parliamentarian elections, it has also shown that Germany and Russia are still locked in a complex and often uncomfortable embrace, with Ukraine in the middle. For Ukraine the question is if or when this embrace could turn into a deadly squeeze.