Review of "Selected Speeches and Writings of Theodore Roosevelt"

Murray Polner, a regular book reviewer for the HNN, edited with an introduction “William Graham Sumner: The Conquest of the U.S. by Spain” and wrote, with Thomas Woods Jr., “We Who Dared To Say No To War.” 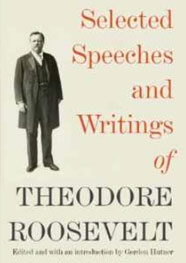 It sometimes seems that with every passing year Teddy (he hated the nickname but many Americans loved  the intimacy it conveyed) Roosevelt  has lots of admirers today even among those who know little about him other than his macho, intimidating  maxim “Speak softly and carry a big stick.” America hasn’t won a war since WWII but for some, TR evokes  an image of toughness and glory.

He reinforced that picture by being  self-directed  and naturally uninhibited. After only two years as governor of  New York State he shamelessly  announced that he was the state’s best governor, better even  than Grover Cleveland and Samuel J. Tilden, a claim historian and critical TR biographer Henry Pringle described as ‘a shade overenthusiastic.” Finley Peter Dunne, the Bill Maher/ Jon Stewart of the time, was no fan. He  had his fictional Irish bartender Mr. Dooley say that TR’s  book about the invasion of Cuba and  his Rough Rider’s  charge up San Juan Hill  should have been re- titled  “Alone in Cuba.” Not to be outdone, and dismissing the imperial triumphalism that swept the country after the conquest of Spanish-owned Cuba, William Graham Sumner, the acerbic Social Darwinist and Yale sociologist  who despised TR wrote, “My patriotism is outraged by the notion that the United States was never a great nation until it knocked to pieces a poor, decrepit bankrupt old state like Spain in a petty three month campaign.” And after William McKinley chose him as his Vice-President, Mark Hanna, the powerful  Ohio Republican politician,  uttered his famous caveat: “Don’t any of you realize,” he warned his fellow Republicans about TR, “that there’s only one life between this madman and the White House?”

But TR in truth was far more than his detractors gave him credit for.  His “Square Deal,” opposed by conservatives in both parties, was  more fruitful than most administrations until the arrival of FDR’s New Deal. He presented future generations with magnificent national parks and forests, protected consumers from unregulated crooks in the food and drug business, attacked powerful, unaccountable trusts, and condemned the corruption of  money in politics and what he believed was the inequality between laborers and owners. Rarely pausing, he wrote more books than any of our presidents; editor Gordon Hutner says he  managed to read one book every day. A self-righteous preacher of virtue and morality, he was above all an ambitious and highly motivated  man of action. “He did things," said an anonymous devotee quoted in an old magazine I once read.  In short, he was Teddy to his many admirers.

To read Selected Speeches and Writings of Theodore Roosevelt,  edited and with an introduction by Gordon Hutner, professor of English at the University of Illinois at Urbana- Champagne and  founder and editor of the estimable journal  American Literary History, we see a more balanced and nuanced portrait of the man who refused to be silent even after losing the 1912 election to Woodrow Wilson.

Hutner’s brief, germane introductions  to each chapter plus his deft selections of TR’s output, show him as an  inquisitive polymath, a prolific biographer (Thomas Hart Benton and Gouverneur Morris), historian (The Naval War of 1812) and his six-volume The Winning of the West, which took him five years to research and write and which Hutner rightly calls “magisterial.” After his failed Bull Moose presidential race in 1912, he wrote twelve more books of varying quality. TR was, Hutner concludes, an exceptional man and public figure blessed with “verve and [the] depth of his commitments.”

As the prime exponent of the “strenuous life” he wrote a prescient  magazine piece in 1890 about football, extolling  amateur athleticism while warning that the professionalization of sports would eventually mean more passive and crazed fans watching other men playing the game. Had he known about the multi-billionaire industry football has become at the college and professional level, not to mention its violence, he would surely have had something critical to say.

While never unsympathetic to “good” corporations, his 1902 speech, “The Control of Corporations,” addressed the growing control  of American life by “evil” corporations and urged that they be regulated by the federal government. “Some governmental sovereign must be given full power over these artificial, and very powerful, corporate beings.” He tried to ban corporations from contributing money to politicians.  You have to wonder what this Republican non-conformist would make of our recent Supreme Court rulings allowing unlimited amounts of money to pour into political campaigns. As President,\he repeatedly reminded listeners that the more wealthy and powerful trusts became the more the classes would divide, something he always viewed with alarm. He displayed this attitude during the United Mine Workers of America’s Anthracite Coal Strike of 1902, where he got both sides to accept a federal mediation panel and then leaned on them to accept its proposed compromise. After that, and for the rest of his presidency, he insisted  “We must see that each man is given a square deal.” It was easier  said than done given the rapid economic and societal  changes underway, but  unlike so many inhabitants of the White House before and after, TR understood that fairness to all was what most Americans wanted. “We must see that each man is given a square deal,” said TR over and again, so that he may achieve his  goal of an “orderly liberty.”

Race also concerned him. Hampered as he was by the prevailing prejudice and stereotypes, he tried to extend that sense of equality to black Americans. Because he was the first president to ask a black man, Booker T. Washington, to dine at the White House, a courageous if somewhat political move given the uproar it caused by racist Southern Democrats,  he was invited to speak at a meeting in Carnegie Hall sponsored by a black organization on November 2, 1918.

In “The  American Negro and  the War,” he celebrated the “honorable participation” of black soldiers  but could not avoid a little condescension, telling his black audience that while whites should treat “the colored man, and even more the colored woman, squarely,” blacks must not offend whites. “Stand up for your rights, of course" he urged the black audience,  but “set your faces like flint against the Negro criminal ….who does  more to keep the Negro down than any white man can possibly do…hunt down, hunt out the colored criminal of every type. Thereby you will render the greatest service to the colored race that can possibly be rendered.”

He probably meant no offense and was a vast improvement over the bigoted Woodrow Wilson who had no use for blacks. Some of TR’s opinions were reflected in Warren Harding’s approach to the racial issue when he too publicly expressed the view  that black Americans deserved equal rights, supporting any-lynching legislation and once telling a Birmingham, Alabama, audience “We cannot go on, as we have for more than a half century, with one section of our population…set off from contribution to solving our national issues because of a division on race lines.”.

Unmentioned by Hutner, however, is the stain on TR’s reputation  because of  the infamous Brownsville, Texas, incident when racial tensions between black troops of the 25th Infantry Regiment and  local  white residents erupted in violence after a white barkeeper was killed and a police officer shot. In spite of evidence proving their innocence, TR disagreed and ordered 167 black soldiers discharged and their pensions forfeited. Long after, in the 1970s, a new investigation cleared them, though by then most had died.

If his domestic policies were progressive then his foreign polices were not, reflecting today’s neoconservative and  liberal hawks.  TR defended the invasions of Cuba and the resulting  Platt Amendment, which turned Cuba into an American protectorate and forced Cuba to “lease” Guantanamo to the U.S.  He viewed the occupation of the Philippines as a humane act designed to bring democratic virtues to uninformed, unqualified natives, a precedent for future presidents who turned the Caribbean into an American lake. He grabbed Panama from Colombia in order to build a canal, famously claiming that, while Congress was mired in debate (their constitutional right), he forged ahead and got results. He created the Great White Fleet, the better to spread American global power.  He maligned critics of his imperial dreams, denouncing “hysterical sentimentalists for peace” and “ultra peace people” who opposed expansion. He was, in short, a “regime changer,” much like our contemporary ideologues who  tried and failed to overthrow Castro’s Cuba and failed as well  in transforming Iraq and Afghanistan into functioning democracies. One of his pet words was “preparedness,” which he urged on the nation and which Gordon Hutner defines as ”the era’s buzzword for militarization.”

TR’s critics accused him of loving war, aspects of which he certainly did, though this complex man was awarded the Nobel Prize in 1906 for mediating the end of the Russo-Japanese War.  But his larger purpose was to mold the nation’s boys into a race of sturdy, vigorous and patriotic men always prepared to serve the nation. He repeatedly called for mandatory universal national service for males, something still promoted (some advocates now add females) as a panacea for a variety of entirely  unrelated contemporary ills.  And until April 1917, when Congress declared war against Germany, he excoriated Wilson for failing to take on the Kaiser.  (In WWI , 100,000 American soldiers were killed, not to mention those crippled in body and mind). TR’s four sons joined the military but when Quentin, his youngest son, was killed at the age of twenty, his plane shot down by a German fighter, TR went into decline, never  recovering from the loss of the son he so loved, dying  in 1919.

Gordon Hutner’s choice of TR’s enormous output is more than welcome. Some of his books are shallow and hardly worth reading today but others are, like The Winning of the West, The Rough Riders and my personal favorite, his final work  Letters to His Children. Teddy “did things” alright, and some of them, at least in the domestic arena, deserve to be remembered and celebrated.