A Tedious Tale of 1962 Catskills Cross-Dressers 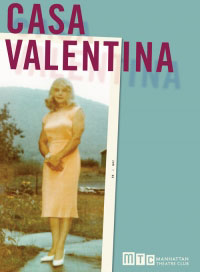 “What the hell?” asks Rita, the wife of a cross-dresser who owns a small cross-dresser’s resort in New York’s Catskills Mountains, at the very end of Casa Valentina.

You could ask that about the entire play.

The story by Harvey Fierstein, based on the lives of actual people who visited the Chevalier d’Eon resort in Hunter, N.Y., in the Catskills mountains in the summer of 1962, is a slow, drawn out, very tedious tale of a cross-dresser’s heaven gone wrong.

The plot is simple. The resort was founded by George, who doubles as the well-dressed woman Valentina on weekends, with his wife so that heterosexual men who liked to dress as women could spend time with people of the same persuasion, dining and dancing, hidden away from a world that did not understand them . The Catskills are a two hour car ride from New York City. Just a few miles away from the cross-dresser paradise, red-white-and-blue, All-American families spent their vacations at the other dozen or so resorts in the Catskills.

The sedate non-threatened, orderly lives of the men at the resort are disrupted when there is an allegation that one of them is a homosexual who might be indicted by a local grand jury for pornography. The revelation causes an uproar among the men/women and they not only confront each other, but their own sexuality. Is the enjoyment of wearing women’s clothes for a few days all that cross dressing is?

The problem with the play is that it is really an intense twenty minute argument at a party dragged out to two and a half dull hours. It is also full of overdone pro-homosexual preaching, finger pointing and accusations that anybody who thinks cross-dresses are strange are strange themselves. The entire first act trudges by without much action beyond nail filing. There is confrontation in the second act, which is more interesting than the opener, but it still does not make this an engaging play.

The subject would seem rife for humor between the men/women, but there is little. George’s wife Rita seems as lost as the audience. She is tossed into the play to show that the men there are straight, not gay, but she is just window dressing, a gender rock in a housecoat.

The men had to be far more afraid of being exposed in 1962 than they would be today because the country is far more tolerant today. Americans were not tolerant of gays or cross-dressers in the early 60s; hence the hidden mountain retreat for protection. Sexual tension runs through each of the characters, but does not make for much of a story.

The real history of the Chevalier D’Eon, later relocated a few miles away and renamed Casa Susanna, is pretty interesting. The Casa’s history was hidden for decades after it closed. The cross-dressers’ story was only uncovered some forty years later when someone found a photo album with dozens of pictures of the men/women in its pages. Later, the men/women came forward to tell their stories. What they did seemed pretty harmless, but then, and now, people outside that clique see cross-dressing as pretty unusual.

The actual bungalow colony was run by Tito Valenti and his wife, Marie, who lived in New York City, in the 1960s They took in several dozen men/women boarders each summer. The women dined and played cards and outdoor sports on weekends, returning to their rather ordinary lives during the week. The women were heterosexuals, not transvestites, and they represented a cross section of American life. They looked as harmless as women and they did as men.

These men at Casa d’Eon were straight; some even brought wives and girlfriends with them for the weekend. In the Fierstein play, the men seem to be ether homosexuals or men who lost their identity to their feminine side and, in doing so, ruined their marriages. The tragedy aspect of the Fierstein story is not very entertaining, though, and you never develop a liking for any of the characters in the play.

It is a shame that Fierstein left out the rich history of the Catskills in the story. The Catskills was one of the country’s most successful resorts throughout the 1950s and ‘60s. It was an entertainment center that featured all of the country’s top singers and comics. There were large resort hotels with world famous golf courses and numerous small bungalow colonies that were frequented by tens of thousands of city folk. A large per cent of the guests were Jewish and the entire area was fondly referred to as the ‘Borscht Belt.’ The Catskills died after the development of the jet airplane that could take New Yorkers to Florida and the Caribbean in less time than it took to drive to the mountains. The resort area collapsed after the sixties, but hoped for casinos to revive itself, but they never arrived. Today, one casino might be built in the Catskills and that could revive the resort business.

We doubt that any new cross-dresser resorts will open, but, hey, you never know.

Director Joe Mantello did a decent job in this long play with a wobbly script. He received good performances from Patrick Page as George, Mare Winningham as his wife Rita and Gabriel Ebert, Tom McGowan, Reed Birney, Nick Westrake, John Cullum and Larry Pine as the girls. Lisa Emery played one of the girls’ daughter.