HNN's Ongoing Coverage of the Conservative Attack on Rick Perlstein

HNN Editor:  Just as his new book, The Invisible Bridge: The Fall of Nixon and the Rise of Reagan, was receiving rave reviews in the New York Times and plaudits here and here and here, Rick Perlstein was being accused by some conservatives of various offenses, including plagiarism.

The first professional historian to weigh in on the question of plagiarism was Charles Peter Hoffer, who concluded, in an article published by HNN, that it's not Perlstein's scholarship that's at issue, it's his politics.

You can follow the debate on this page, which features excerpts from newspapers, magazines, websites, blogs, and Twitter.  This page will be updated as needed.

● HNN Hot Topics: Plagiarism (How to define it. Who's been guilty of it.)
● Rick Perlstein's End Notes, posted online
● Craig Shirley's reaction to the media storm he ignited (August 4, 2014)

HNN Editor:  Craig Shirley, the author of the 2004 book, Reagan's Revolution:  The Untold Story of the Campaign that Started It All, charges that Perlstein plagiarized him more than fifty times.  Shirley's lawyer provided a list of examples to Perlstein's publisher, Simon and Schuster, which Slate posted on the Internet.  The column on the left consists of passages taken from Shirley's book.  The column on the right consists of parallel passages in Perlstein's book. (See Slate's story here.) Shirley himself subsequently provided a fuller list of examples here. 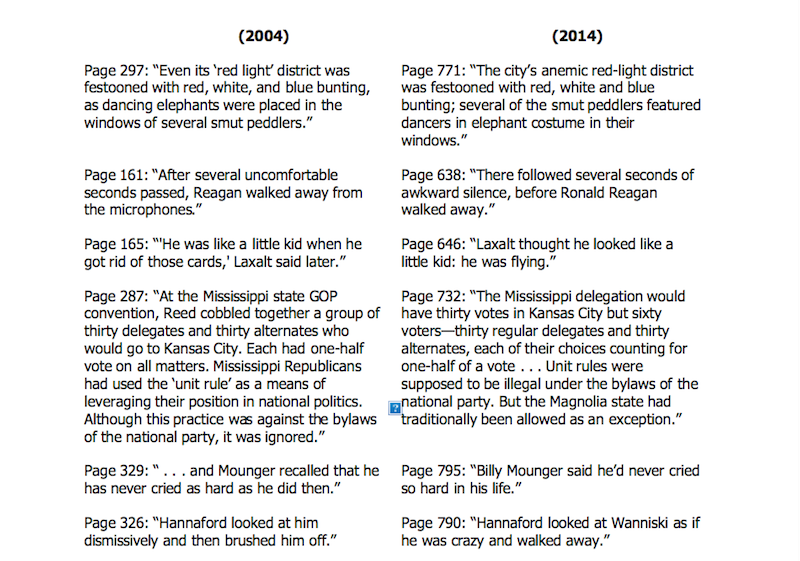 Shirley’s P.R. associate Diana Banister sent a mass email (see below) seeking “help in our offensive” against the book. “Anything you can do to jump into the fight would be helpful,” the email reads, even offering to provide supporters “suggested tweets.” So the motives here are clear: a dressed-up attack on scholarship that’s really a calculated political broadside. 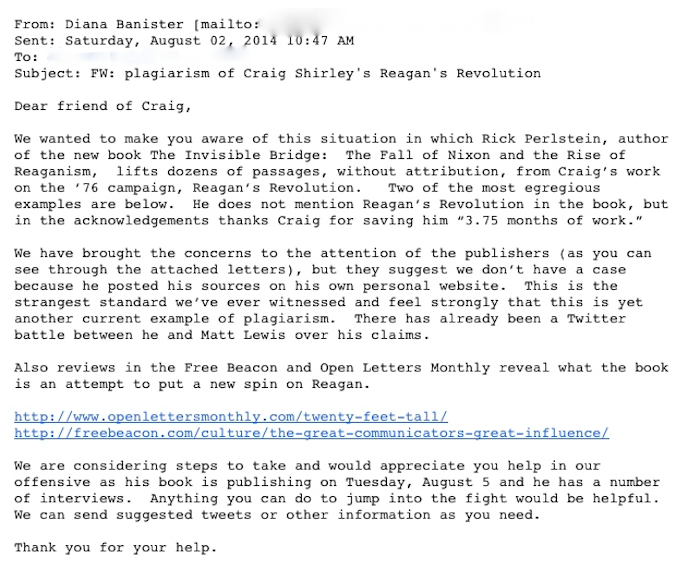 Craig Shirley, who wrote two award-winning books on Ronald Reagan, claims Rick Perlstein plagiarized his prose in at least 45 instances in his new book, “The Invisible Bridge: The Fall of Nixon and the Rise of Reagan.”

Perlstein acknowledges Shirley in his book, due Aug. 5 from Simon & Schuster, writing, “Craig Shirley saved me 3.76 months in research.” But Shirley claims sentences were lifted without attribution in the book almost word for word.

For instance, page 287 of Shirley’s “Reagan’s Revolution” states: “Even its ‘red light’ district was festooned with red, white, and blue bunting, as dancing elephants were placed in the windows of several smut peddlers.”

Page 771 of “The Invisible Bridge” says: “The city’s anemic red-light district was festooned with red, white and blue bunting; several of the smut peddlers featured dancers in elephant costume in their windows.”

OK, this is grotesque. Rick Perlstein has a new book, continuing his awesomely informative history of the rise of movement conservatism — and he’s facing completely spurious charges of plagiarism.

How do we know that they’re spurious? The people making the charges — almost all of whom have, surprise, movement conservative connections — aren’t pointing to any actual passages that, you know, were lifted from some other book. Instead, they’re claiming that Perlstein paraphrased what other people said. Um, what? Unless there’s a very close match, telling more or less the same story someone else has told before is perfectly ordinary — in fact, it would be distressing if history books didn’t correspond on some things.

Can I say, I’m familiar with this process? There was a time when various of the usual suspects went around claiming that I was doing illegitimate things with jobs data; what I was doing was in fact perfectly normal — but that didn’t stop Daniel Okrent, the outgoing public editor, from firing a parting shot (with no chance for me to reply) accusing me of fiddling with the numbers. I also heard internally that there were claims of plagiarism directed at me, too, but evidently they couldn’t cook up enough stuff to even pretend to make that stick.

The thing to understand is that fake accusations of professional malpractice are a familiar tactic for these people. And this tactic should be punctured by the press, not given momentum with “opinions differ on shape of the planet” reporting.

Rick Perlstein always hoped his book on the rise of Ronald Reagan would set off serious debate among scholars and historians. Just not this debate.

Mr. Perlstein’s new 856-page book, “The Invisible Bridge: The Fall of Nixon and the Rise of Reagan,” which comes out Tuesday, is proving to be almost as divisive as Reagan himself. It has drawn both strong reviews from prominent book critics, and sharp criticism from some scholars and commentators who accuse Mr. Perlstein of sloppy scholarship, improper attribution and plagiarism.

In two letters to Mr. Perlstein’s publisher, Simon & Schuster, Mr. Shirley’s lawyer, Chris Ashby, cited 19 instances of duplicated language and inadequate attribution, and demanded $25 million in damages, a public apology, revised digital editions and the destruction of all physical copies of the book. Mr. Shirley said he has since tallied close to 50 instances where his work was used without credit.

Mr. Perlstein and his publisher said the charges are unfounded and noted that Mr. Perlstein cited Mr. Shirley’s book 125 times on his website,rickperlstein.net, where he posted his endnotes, which include thousands of citations and links to sources....

You might think, from this article, that there is a real issue about Rick Perlstein’s scholarship.  But you would be wrong, and what a pity that Alter, just hired, would debut so awkwardly.

Alexandra, reporting is not collecting quotes from both “sides” of a story, especially when one side is a historian with a reputation and a long record and the other “side” is a hack and a flack.  See, you can actually use your Columbia J-School training about what plagiarism is, not to mention your special expertise covering the publishing industry, to discern the facts,  and tell us what they are, and you should, and you didn’t.

You can also figure out that someone like Craig Shirley is not the real goods with fairly rudimentary research skills.  Even I could figure that out, and from the second sentence on his Wikipedia page:

He is best known as “one of the most esteemed Ronald Reagan biographers“.[1]

See the little [1]? it points, in support of the assertion, to a piece of Reagan hagiography, by someone I never heard of, on Breitbart.  Breitbart. The Wikipedia page sounds as though it was written by Shirley or his intern, but it doesn’t matter: Wikipedia is open source, and if Shirley is allowing that to remain on his page, he has a concept of esteemed, and of evidence therefor, that waves red flags all over the place.

Matt Lewis writes for the Daily Caller, the website founded by Tucker Carlson. Lewis wrote a story about the controversy here. 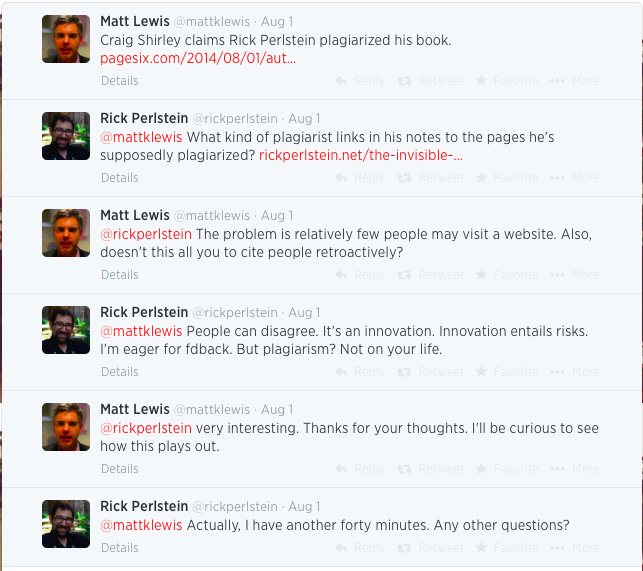