Review of Gavin Wright’s “Sharing the Prize: The Economics of the Civil Rights Revolution in the American South”

Mike O’Connor teaches U.S. history at Georgia State University. He is the author of "A Commercial Republic: America’s Enduring Debate over Democratic Capitalism," recently published by the University Press of Kansas. 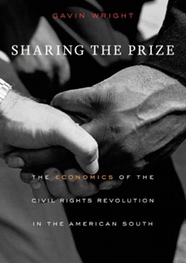 The Civil Rights Act is fifty years old this year. Though assessments will differ regarding the impact of this law and of the Civil Rights Movement that brought it to bear, to many this signature achievement feels a part of modern U.S. history. Liberal historians argue that the end of overt white supremacy led to the emergence of a more insidious variety of purportedly color-blind racialism, while conservative writers articulate dissatisfaction with the rise of what they diagnose as a “culture of victimization” stemming from the movement’s successes. Both camps implicitly agree, however, that the Civil Rights Movement represents a dividing line between “then” and “now.” The fact that it plays a primary role in defining the terms of the modern era, however, can blind us to the fact that the movement is part of the distant past rather than the recent one. We are as far removed today from the Civil Rights Act, for example, as those who fought to pass that measure were from World War I. The assumption that we can evaluate the movement in light of modern-day values frequently undermines our ability to understand its effects and to evaluate the plausibility of alternative approaches.

Gavin Wright’s focused and well-argued book, Sharing the Prize, provides a clear-eyed corrective to this tendency. Granting that the movement was “a moral and legal revolution,” (2) Wright asks the provocative and important question whether it can be declared an economic one as well. Now that enough time has passed to allow for both sufficient historical distance and the accumulation of enough relevant data, he is able to argue convincingly that the “record shows strong gains…for African Americans in the South—relative to earlier levels, relative to southern whites, and relative to national standards.” (26) To those who do not specialize in economic analysis or the history of the Civil Rights Movement, this point might seem fairly obvious: It would seem difficult to argue that blacks’ economic situation has not improved since the days of Jim Crow. But to emphasize that point is to commit the fallacy–so often warned against by economists–of confusing correlation with causation. The fact that African Americans have enjoyed economic improvement since segregation does not necessarily mean that they have done so because ofthe Civil Rights Movement.

But Wright believes that the movement was the primary catalyst for these changes, and one of the major purposes of his book is to contest two alternative explanations for this improvement. The first of these is that “the Civil Rights revolution was largely a byproduct of economic change.” (16) Under this interpretation, segregation was costly and inefficient; as economically rational, utility-maximizing white southern business owners slowly became aware of this fact, they began the process of dismantling the system themselves. The Civil Rights Movement converged with impersonal economic forces to hasten this result, but was not its sole, or even most important, cause. Wright rejects this version of events by noting that the historical record shows little evidence of business owners integrating their workforces or serving African American customers before the movement forced them to do so. The reason for their reluctance was that “most southern firms and most white southerners believed that desegregation was economically threatening.” (19) In many cases, these convictions turned out to be wrong. This observation marks not only an important historical point, but also a powerful argument against the widespread belief that ideologically-driven injustice will inevitably give way to the pursuit of economic self-interest.

The other analysis Wright contests is one suggesting that African Americans were able to prosper only at the expense of whites. Sharing the Prize instead argues that “aggregate indicators point clearly to a post-Civil Rights growth acceleration.” (27) This is not to say that increased racial harmony actually caused a golden age of southern economic growth. That scenario, Wright maintains, is a bit too rosy. “The more immediate stimulus,” he contends, “was that settling the most contentious racial issues allowed political and business leaders to resume their pro-growth agenda.” (29) Yet Wright’s major conclusion still stands: the Civil Rights Movement was a major economic boon for African Americans and, more broadly, the South itself.

Wright’s overall conclusions rest on his analysis of the economic implications of four areas related to the Civil and Voting Rights Acts: public accommodations, labor markets, school desegregation and voting rights. With regard to the first, he seeks to explain a paradox: Given that most business owners resisted opening their doors to blacks, and that in the long run integration turned out to be good for business, “southern business had to be coerced by the federal government to act in its own economic self-interest.” (75) Such a dynamic would run afoul of both economic orthodoxy, which emphasizes that individuals are the best judges of their own well-being, and the increasingly influential libertarian idea that government economic intervention seldom leads to positive economic results. The integration of public accommodations provides evidence against both of these positions. Once the sit-in movement prompted the desegregation of lunch counters, many business owners found that their fears of customer revolts to be largely unfounded. “If I’d known it could have been done this easily,” one manager reported, “I’d have been for it right from the start.” (84) The resulting pattern of desegregation, however, was uneven. The number and types of public accommodations open to blacks varied significantly from one city or town to another. In such an environment, civic leaders came to believe that their own businesses would be worse off if they integrated alone, but better off if all of the local stores, restaurants and theaters did so together. Under this reasoning, they slowly began to call for federal legislation, in opposition to their earlier positions. Though one should not exaggerate the smoothness of this process, in the end it brought about a convergence of the interests of justice with those of business owners and their customers.

In the labor market, Wright notes that economic interests did not bring about desegregation on the southern factory floor. If they had, then the lower wages typically paid to African Americans would have brought about integration on its own. Instead, increased black employment in the South, beginning with the textile industry and soon spreading to other sectors, was largely a result of enforcement by the federal Equal Employment Opportunity Commission. The integration of the workforce appears as “another example…where southern business was compelled or at least impelled by outside authority to take actions serving its own best economic interest.” (110)

A more difficult case for Wright is southern school desegregation, which is “the most difficult to analyze economically.” In contrast to his previous examples, it “did not gather momentum and become embedded in in the expectations of white southerners over time.” (150) The Supreme Court required integration in its 1954 Brown v. Board of Education decision, but school districts did little on this front until the mid-1960s. The catalyst for greater attention to the issue, argues Wright, was the Civil Rights Act coupled with “uncompromising federal enforcement.” (158) Soon the South could boast of the most racially integrated public schools in the nation. Other regions, however, had not been subject to this federal coercion. Their schools struggled with integration even as those in the South began to resegregate after federal pressure eased. Wright concludes that the incentive structure of public education made the gains in integration difficult to maintain. Private businesses will internalize new values once experience shows that they aid the bottom line, but public schools, rooted in unitary districts, lack the broad scope necessary to sustain new commitments. More important, “the cost of switching between districts is low” (171) so those who resist new changes simply opt out of them.

Sharing the Prize’s final considerationis voting. The Voting Rights Act, argues Wright, has led to “tangible gains over time for black communities in the South.” (198) Such factors as public services, government employment, federal funding, and community investment tend to be distributed more fairly today. Increased black political participation has led to tangible benefits for African Americans, such as “the rapid disappearance of racist rhetoric in [Southern] campaigns” (214), increased welfare spending and a greater emphasis on public education. More recently, however, the rise of conservatism has “isolate[d] African Americans politically” and “stifle[d] or reverse[d] the policy programs they support.” (221) Wright holds it premature to “declare that the era of the voting rights revolution and biracial coalitions in the South has come to an end,” but identifies the major challenge in the current environment as that of cultivating “genuinely interracial coalitions.” (222)

Sharing the Prize uses economic metrics to argue that the Civil Rights Movement has served as a major force in the improvement of African American lives. Far from a celebration, however, the book also soberly assesses and explains the ways in which the promise of civil rights has not always been fulfilled. In addition, it issues a challenge to economic theory in noting that white southerners frequently prioritized segregation over their pecuniary self-interest. In performing all of these functions simultaneously, Gavin Wright has issued a comprehensive and powerful assessment of the ongoing significance of the Civil Rights Movement.