Why Are Palestinians Still Living as Refugees 6 Decades Later? 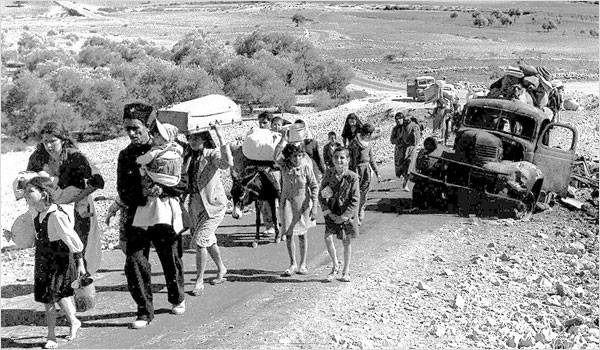 During the donor conference held in Cairo a few days ago, the US, EU, and other countries pledged $2.7 billion for reconstruction in Gaza. It is undoubtedly necessary to make such a humanitarian effort to rebuild the shattered lives of hundreds of thousands of Palestinians who suffered the most as a result of the last violent confrontation between Israel and Hamas. That said, regardless of how admirable this financial commitment may be, the fact that it was not linked in any way to the peace process, and in particular to solving the most acute and endemic problem of the Palestinian refugees in Gaza, is another gross missed opportunity.

The Palestinian refugee problem, especially those who live in their homeland—the West Bank and Gaza—remains as one of the thorniest problems preventing the establishment of a Palestinian state. A dignified solution is what the refugees deserve to restore their self-esteem – not a continuing handout to perpetuate a life-long stigma.

It is nothing short of a travesty to allow another generation of Palestinians to grow up in a state of limbo, only so their corrupt leaders can ride on their backs and cry wolf about their plight while shamelessly enjoying the good life.

The statistics are startling; according to the United Nations Relief and Works Agency for Palestine Refugees in the Near East (UNRWA), the number of registered refugees in Gaza is 1,240,082 out of a total population of 1.5 million, and 754,411 are registered in the West Bank (out of a population of 2.4 million).

Any Palestinian 50 years old or younger was born in the West Bank and Gaza; this represents more than 80 percent of the population in these two areas. In the refugee camps, over 50 percent of the inhabitants are under the age of 25. Only 30,000 are original refugees.

No efforts have been made to resolve the tragic refugee problem on its own since 1948. Instead, it has been exploited at the expense of innocent men, women, and children, who have been mislead, mistreated, marginalized, and used as sacrificial lambs only to feed the insatiable hunger for power of their misguided and self-absorbed leaders.

In what was initially a disastrous event, the 1948 exodus turned into a Greek tragedy, festering over time and engulfing innocent souls. Since then, the refugees have multiplied nearly sevenfold, with many living under subhuman conditions which serve as incubators for militancy and violence, which Hamas in particular seeks to cultivate.

Many countries have played a role in contributing to the prolongation of the Palestinian refugees’ plight.

UNRWA in particular is guilty of perpetuating the Palestinian refugee crisis. It was established by the UNGA in December 1949, and its mandate to care for the refugees is renewed every three years; the current extension runs until June 30th 2017.

The agency employs more than 25,000 workers and has developed a vested interest in maintaining the status quo of the refugees in order to remain relevant. Moreover, since the vast majority of UN member states do not want to appear as being unsupportive of the refugees, UNRWA’s mandate has consistently been renewed for more than six decades.

Out of the top 20 donors to UNRWA, 15 are western countries or organizations. Western European countries keep providing monetary assistance for humanitarian reasons, but this only protracts the refugees’ humanitarian plight instead of promoting their permanent resettlement.

The United States continues to acquiesce to the status quo and became an enabler, which has inadvertently prevented a humane solution to the refugees for decades.

The Arab states continue to exploit and manipulate the refugees for domestic consumption to distract their own public from their terrible socio-economic conditions and human rights violations.

Palestinian leaders have held the nearly two million refugees in the West Bank and Gaza as hostages. For nearly seven decades, they have insisted that the “right of return” of the refugees is sine qua non to the solution of the Israeli-Palestinian conflict.

This flies in the face of the poll conducted in 2003 by Dr. Khalil Shikaki, which showed that only 10 percent of the refugees in Syria, Lebanon, Jordan, the West Bank and Gaza would opt to return to Israel (their original place of residence). Since then, the number has more than likely further decreased as the prospect of returning is increasingly diminishing.

Successive Israeli governments refused to assume any responsibility and made no effort to galvanize international support to resolve the plight of the refugees.  Right-wing Israeli governments who opposed a two-state solution found the persisting refugee problem to be a convenient impediment.

Ironically, in every set of negotiations in 2000 at Camp David, in 2008/2009, and 2013-2014, both sides agreed that the right of return cannot be exercised literally, and only a few thousand could rejoin their extended families in Israel over a period of few years.

It should be noted that regardless of UNRWA’s or any other entity’s definition of who is a refugee, the Palestinian “refugees” in the West Bank and Gaza are not refugees, as more than 80 percent were born in their homeland—the West Bank and Gaza—and the rest are at best internally displaced.

Those Palestinians who insist that they will never forsake the right of return will have to wait forever, and every Arab and Palestinian leader knows this fact only too well.

Instead of trying to achieve a comprehensive solution to the Israeli-Palestinian conflict, which has thus far proven to be elusive, a settlement of the refugee problem—for which there is only one solution, resettlement and or compensation—could pave the way for resolving in stages the other sticking issues.

However theoretical the right of return has become, it hangs over the Israelis’ heads and even a reference to it in any future agreements will not be acceptable, as they view it as a threat to their national identity, if not the very existence of the state.

A resolution to the refugee problem would provide an opening for the US and the EU to exert mounting pressure on Israel to make important concessions in return by starting the negotiations with borders, which the Palestinians rightfully insist upon, to define the contours of the future Palestinian state.

The donor countries should have insisted (and still can) that their contribution to rebuild much of Gaza focus on resettlement and compensation of the refugees, especially since 80 percent of Gaza’s resident are registered as refugees. A similar effort will have to be made to resettle the refugees in the West Bank as well.

The Palestinian people are creative, vibrant, resourceful, and proud people; they must not continue to live in a state of contrived conditions of misery, fed with empty slogans and offered false hope about their “right of return,” only to be crushed later with the truth.