Edwin Black is the New York Times bestselling author of the IBM and the Holocaust, and eleven other bestsellers. Black has covered the Anti-Defamation League and Abraham Foxman for 30 years. 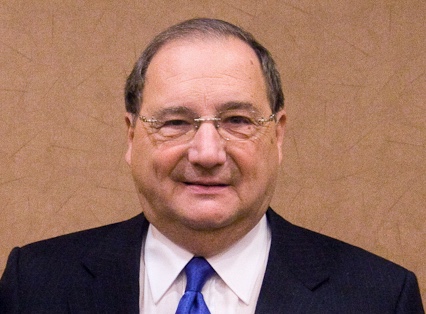 Looking back after 50 years of service to the Anti-Defamation League, retiring national director Abraham Foxman expressed passionate worry to journalist Edwin Black about the safety and security of Jews overseas and Israel’s position in the world. Excerpts from his exit interview follow, edited and condensed for continuity, clarity, and length.

Edwin Black: Looking back over a half century, how does it strike you?

Black: What do you mean the “Jew amongst the nations?”

Black: How do you see the situation in Western Europe?

Foxman: Today, it is a clear and present danger. You have Jewish communities discussing whether they plan to live in Paris, Amsterdam, Copenhagen, etc. We’re getting close to a situation where Hitler will have a posthumous victory for a Judenrein [Jew-free] Europe, where Jews, for the first time, are thinking about exit strategies. How do we provide safety and security for Jewish institutions? Jews are removing their kippas. Kids are taking off their Stars of David. Look at the polls of European Jewish communities. Half of the Jews have either experienced anti-Semitism recently or expect to experience it in the next year. More than half are thinking about leaving. This is not something we believed 50 years ago we would still be experiencing in Europe.

Edwin: And the governments?

Foxman: The [European] governments are standing up — maybe less, maybe more. When the chancellor of Germany calls a rally against anti-Semitism, 5,000 people show up. When [President François]Hollande, speaks against anti-Semitism, and when the prime minister of France stands up and says a “France without Jews will not be France” — wow! We didn’t have that 50 years ago. Can you imagine? Remember Vichy France [Nazi-dominated zone during WWII]. At that time, France sent out its Jews. Indeed, all of Europe was getting rid of its Jews. Having said that, it is still today a very serious issue.

Edwin: What about Eastern Europe?

Foxman: There aren’t that many Jews [left]; but still anti-Semitism is a growing phenomenon. There the governments are still trying to keep anti-Semitism alive. In Russia, I believe there is anti-Semitism. But Putin has decided it’s in his best interest to act and speak out against it.

Edwin: Contrast the Jewish condition overseas with that in America.

Foxman: The U.S. Jewish experience is different. Again, we’re not immune here and things can change. America — not perfect. You may like the president [Barack Obama]; you may not like him. You may like the administration or not. Hey, this is the only country in the world that mandates its ambassadors to report on anti-Semitism. This is still the only country in the world that stands up for Israel and says, “Hey, you’ve got a right to defend yourself.” Not only do they say Israel has a right to defend yourself, they will send Israel the arms to defend itself while Europe won’t even let the planes refuel when America sends its arms to help Israel fight and defend itself. This is a country that [in 1939] wouldn’t let the [German ship] St. Louis dock with its cargo of [Jewish] refugees here. This was a country that let some 1,300 Jews go to Oswego, New York [Jewish refugee camp], while the boats were empty coming with German prisoners. So that’s changed and it’s a major change — even if we disagree with the policy of this administration.

Edwin: The difference is?

Foxman: The American Jewish community then, in 1945, was gornicht [in Yiddish, “nothing”]. It didn’t have a voice. Today, we are a community that understands that we have power and influence. Not power as much as influence. And this is a community that has learned to understand, since WWII, that they can make a difference. And so, freedom for Soviet Jewry — wow, the movement was here. To have the Jackson-Vanik law [instrumental in securing the release of Russian Jewry] when this was a country at war with the Soviet Union — cold war and hot war. And our policy was “determine how they treat the Jews.” And it was the American Jewish community’s “let my people go” voice that forced the American government to act in a way that I don’t think anybody believed it would act.

Edwin: So just how bad is it?

Foxman: While it’s the worst that it’s been since the 30’s and 40’s, it’s not like it was in the 30’s and 40’s. Why? Because, one, we have a Jewish state. Yes, under siege. Yes, maybe under an existential threat. But today, there is this Jewish sovereignty that stands up every which way for Jews. Today, a Jew in Istanbul or in Buenos Aires or in Timbuktu who feels threatened because they are Jews can pick themselves up and go to Israel. They don’t need a cousin or an uncle [to sponsor them]. They don’t need a bureaucrat. They don’t need special permission and protectzia (in Hebrew, “well-placed connections”) in order to get in. All they have to do is say, “I’m Jewish, and I want in.” And Israel opens the door, puts their arms around them, and later checks their tzitzits [sacred knotted threads fringes on a prayer shawl]. Later, they check just how Jewish are you.

Edwin: And to those who say “never again”?

Foxman: Even though, as a survivor, I believe in “never again,” I think survivors say “never again” — but they’re not really sure that it’s “never again.”