Professor Brian Glyn Williams is author of The Last Warlord. The Life and Legend of Dostum, the Afghan Warrior who Led US Special Forces to Overthrow the Taliban Regime. He worked for the CIA’s Counter Terrorism Center and Information Operations team in Afghanistan. 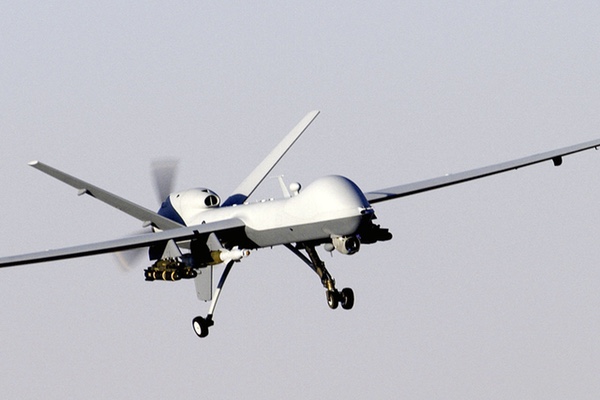 Since 2001 drones have become a signature weapon in America’s war on terrorists and insurgents in the Muslim world and have been deployed from sub-Saharan Africa to the Philippines. But for all the fact that drone strikes are regularly reported by the media, very few Americans have a basic understanding of the contours, tactics, geography, strategy and weaponry used in the CIA’s largest assassination campaign since the Vietnam era. The following five points provide a layman’s guide to this vast, covert campaign in exotic lands for readers who want a deeper understanding of this revolution in warfare and counter-terrorism than that conveyed by the media.

1.  The drones are not actually robots. With the opening of the latest installment of the Terminator movie series staring Arnold Schwarzennegger this summer, non-specialists can be forgiven for thinking that drones are Terminator-style, autonomous deathbots with minds of their own. In actuality, the US military and CIA prefer to use the term ‘Remotely Piloted Vehicles’ to stress the fact that human pilots are in the “kill chain” and ultimately control the drones. A two man team consisting of a pilot and a sensor operator fly the drones remotely, usually from specially designed trailers located at US Air Force bases in the states (often in Nevada) or at CIA Headquarters in Langley, Virginia. Drone pilots surveil their targets from afar via high resolution cameras for up to twenty four hours a day and follow their “pattern of life” movements. This provides an intimate knowledge of the target that was never had by manned jets flying at great heights and at high speeds (the drones are slow and propeller driven). The US military is now training more drone pilots than pilots for manned aircraft. There have been widely reported cases of drone pilots, who are not in harm’s way of course (in military terms they “project power, without projecting vulnerability”), suffering from combat stress due to the intimate nature of their tracking and killing of their human “targets” on screens.

2.  The drones don’t usually drop bombs. While their critics, who make wild claims that “99% of the victims of drone attacks are civilians,” refer to “clumsy drone bombing campaigns,” in actuality most of the ordinance deployed by drones consists of highly accurate, laser-guided or satellite-guided “smart” mini-missiles. The most commonly used missile is the 100 pound AGM 114 Hellfire missile, which was originally designed to be fired by an Apache Longbow attack helicopter. This missile was originally designed to penetrate armor, but was re-configured with a metal sleeve to be used against un-armored targets, such as cars or clay walled houses. In an effort to reduce civilian bystander deaths (“collateral damage” in military parlance), the CIA and Air Force have also taken to firing even smaller mini-missiles called Scorpions which are only 21 inches in length. These “small smart weapons” are a far cry from unguided “dumb” bombs of up to 2,000 pounds which were inaccurately dropped by fast flying manned jets in the past. Their smaller blast radius leads to fewer un-intended victims. The drone missiles are so smart that if an operator sees a civilian bystander coming close to a target after the missile has been fired he can divert it at the last second.

3.  The drones rarely kill civilians. While drone activists focus on the occasional accidental killing of civilian bystanders in voicing their criticism of the “play station mentality” behind drone operations, various studies have shown that the drones rarely create collateral damage. For example, the Washington DC-based New America Foundation has found that the drones have killed roughly 3,000 Al Qaeda and Taliban militants, but only about 300 civilians (i.e. about ten percent of the death toll is civilian).This makes the CIA’s “bombing” campaign far more precise than any previous bombing campaigns in history (usually civilian deaths far outnumber military deaths in aerial bombing campaigns).Such unprecedented accuracy is achieved through such tactics as firing smart missiles at targets when they are clearly observable in automobiles that have left crowded venues.

4.  The CIA drones primarily operate in Pakistan. While the US military ran drone operations in Iraq and Afghanistan, the CIA runs drone operations in the wild tribal regions across the border in Pakistan known as the FATA (Federally Administered Tribal Agencies). This is a remote, hilly region inhabited by fierce Pashtun tribesmen (the tribe that makes up the Taliban). The Pashtuns “bleed” across the frontier into neighboring Afghanistan and have long utilized the FATA as a cross-border sanctuary for waging guerilla warfare in that country. Unable to directly invade this border region, which belongs to sovereign Pakistan, the US chose instead to wage a targeted drone campaign against terrorists and insurgents who fled here after the overthrow of the Taliban in 2001 and converted it into a refuge known as “Talibanistan.” The US has carried out nearly 400 drone strikes in the FATA region and these have killed the number three in the Pakistani Taliban on three separate occasions and the number three in Al Qaeda on two occasions. But for all the facts that the advanced Predator and Reaper drones indisputably kill far more militants than civilians in this region that is under de facto Taliban control, the drone campaign is deeply unpopular in Pakistan. The Pakistani public sees the drones as an infringement of their sovereignty, even though the Pakistani government covertly supports the drone campaign against Taliban terrorists who target their people and have seceded from Pakistan.

5.  The drones make extensive use of spy networks. The high flying drones rely, to a tremendous extent, on techint (technological intelligence, such as eavesdropping on targets’ cellphones and high resolution cameras), but are only as good as their humint (human intelligence). The drones work closely with CIA and Pakistani ISI (Inter Service Intelligence) spy networks on the ground to track the movements of suspected Taliban militants or Al Qaeda terrorists. The spies then surreptitiously place small homing beacons known as ‘prathrai’ (chips) on their targets, which send signals to the drones. The drones then fire laser guided missiles that home in on the cigarette lighter-sized homing beacons and incinerate their targets. The Taliban are quite aware of the drones’ uncanny ability to hunt them and have launched witch-hunts to kill real or suspected spies. They live in constant fear of the ever present drones (which display “deadly persistence” in military parlance) and are afraid to use cell phones, gather in large numbers, move in convoys, store ammunition in depots that can be seen from the air etc. In other words, the drones, when combined with spy networks, terrorize the terrorists and make sure that their safe haven in the FATA is neither safe nor a haven.

There is much more to understanding this complex drone campaign, from the history or the anti-drone movement to the existence of secret CIA airbases in Pakistan itself to Al Qaeda’s responses, but the above points are a good starting point for understanding some of the basics of America’s drone war on terrorists, militants and insurgents in the Islamic world. For more on this highly controversial, murky issue see: Brian Glyn Williams. Predators. The CIA’s Drone War on Al Qaeda.