How Many Contested Conventions Have There Been? 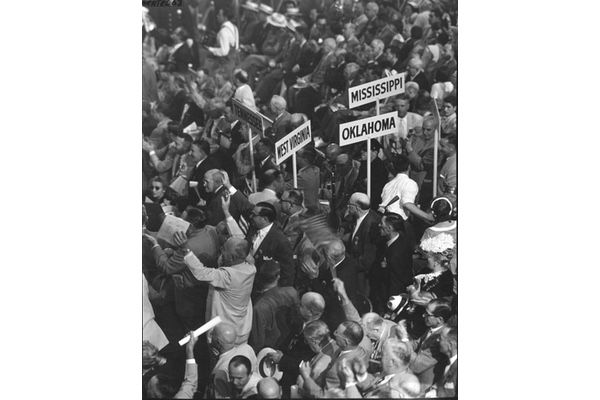 Attendees at the 1952 convention

The growing possibility of a contested Republican Party convention in July draws more interest in examining the history of contested party conventions, as to whether it is common or unusual. The clear cut conclusion is that they are more the norm historically, if not recently.

Ten Republican conventions, fifteen Democratic conventions, and three Whig conventions between 1840 and 1952, went to multiple ballots, with only thirteen of the nominees winning the Presidency, and the other fifteen nominees losing the White House. It should be pointed out that the Democratic Party had more contested conventions due to the two thirds rule that was in effect from the first Democratic National Convention in 1832 until 1936, so only Adlai Stevenson in 1952 did not have to face this difficult challenge on percentage of delegates, that the Whigs and Republicans never had to deal with.

Nineteen of these twenty eight contested conventions occurred in the 19th century, between 1840 and 1896, a very tumultuous and divided time in American politics, where Presidential elections were often very close. Three Whig Party nominees had contested nomination battles over twelve years, including William Henry Harrison in 1840; Zachary Taylor in 1848; and Winfield Scott in 1852, with Scott the only loser of the Presidency. We see six Republican nominees having to fight for the Presidential nomination over 32 years, including John C. Fremont in 1856; Abraham Lincoln in 1860; Rutherford B. Hayes in 1876; James A. Garfield in 1880; James G. Blaine in 1884; and Benjamin Harrison in 1888, all winning except for Fremont and Blaine.

At the same time, we have ten Democratic nominees engaged in battles for the nomination of their party over 52 years, including James K. Polk in 1844; Lewis Cass in 1848; Franklin Pierce in 1852; James Buchanan in 1856; Stephen Douglas in 1860; Horatio Seymour in 1868; Samuel Tilden in 1876; Winfield Scott Hancock in 1880; Grover Cleveland in 1884; and William Jennings Bryan in 1896, with Polk, Pierce, Buchanan and Cleveland occupying the White House.

Then from 1912 to 1952, another nine contested conventions occurred with multiple ballots, and we see four Republican nominees having a struggle for the nomination of their party, including Charles Evans Hughes in 1916; Warren G. Harding in 1920; Wendell Willkie in 1940; and Thomas E. Dewey in 1948, with only Harding winning the Presidency. Meanwhile, five Democratic nominees fought for their party’s nomination, including Woodrow Wilson in 1912; James Cox in 1920; John W. Davis in 1924; Franklin D. Roosevelt in 1932; and Adlai Stevenson in 1952, with only Wilson and FDR winning the Presidency.

So the thirteen nominees in contested conventions who won the Presidency were William Henry Harrison in 1840; James K. Polk in 1844; Zachary Taylor in 1848; Franklin Pierce in 1852; James Buchanan in 1856; Abraham Lincoln in 1860; Rutherford B. Hayes in 1876; James A. Garfield in 1880; Grover Cleveland in 1884; Benjamin Harrison in 1888; Woodrow Wilson in 1912; Warren G. Harding in 1920; and Franklin D. Roosevelt in 1932. Therefore, two Whigs, five Republicans, and six Democrats were elevated to the White House. The fifteen losing candidates included one Whig, five Republicans, and nine Democrats.

Since the last truly contested convention in 1952, three later conventions have been memorable, although not technically contested. The 1976 Republican convention is remembered because Gerald Ford won only slightly over Ronald Reagan, but he had the ability to win on the first ballot. The same applies to the 1968 Democratic convention, which was tumultuous, but Hubert Humphrey won on the first ballot over Eugene McCarthy and George McGovern. And the challenge by Ted Kennedy to Jimmy Carter in the 1980 Democratic convention did not prevent Carter from being nominated, although Carter lost the Presidency as a result of the intraparty split! Finally, realize that these more recent conventions that were somewhat contentious led to the defeat of all three Presidential candidates, including two Presidents, Ford and Carter, running for reelection!