Dr. Wayne Wei-siang Hsieh, Associate Professor of History at the U.S. Naval Academy, is co-author (with Williamson Murray) of A Savage War: A Military History of the Civil War (Princeton University Press, 2016).The views expressed here are solely those of the author in his private capacity and do not in any way represent the views of the U.S. Naval Academy, U.S. Navy or the Department of Defense. 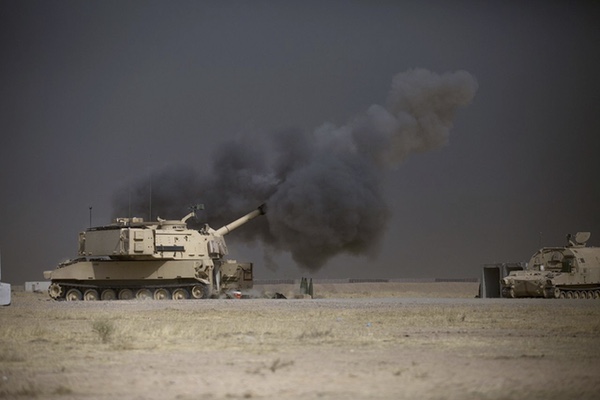 In a perverse twist of fate, Mosul fell in June 2014 just as I was attending the biennial meeting of the Society of Civil War Historians in Baltimore, MD. The two strands of my professional career had collided with one another—former political officer/Iraq hand and military historian of the American Civil War—but at the time the two experiences might as well have existed in different worlds, even if they inhabited my own mind. 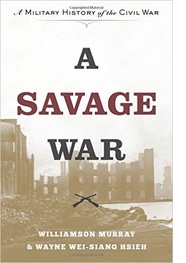 More than two years later, as Iraqi forces begin the liberation of Mosul from ISIS in conjunction with an escalating but still unclearly defined American war effort, the combination seems less discordant. While Civil War Americans faced death and destruction on a scale unimaginable to ourselves, their war effort also benefited from a stronger and more cohesive sense of purpose that both justified and guided in a plausible way their war’s intense violence.

In contrast, Americans have struggled to find a coherent way to explain to ourselves why we fight against ISIS (and other Islamist groups), and what moral and material price we are willing to pay to obtain our national objectives. By itself, clearly defined goals and a willingness to pay the costs associated with those goals may not need lead to victory—it certainly did not for the Confederacy—but obtaining victory in war is hard enough without having a clear sense of how one defines victory in the first place.

The American Civil War was a modern war, in the sense that it combined the economic and material advances of the Industrial Revolution with the powerful nationalism unleashed by the French Revolution. Not only did the nation-state now have more powerful material means to wage war—i.e. more lethal weapons, new forms of transportation such as the locomotive and the steamship—but it could also call on new levels of psychological commitment rooted in the idea that the nation was worthy of the ultimate sacrifice. Defining the borders and internal structure of the nation obviously remained a point of conflict—otherwise there would not have been a need to fight a war in the first place. But in the case of the sectional conflict, while Confederates arguably had a higher level of commitment to their cause than did Unionists, their national project still failed because the North mustered enough national will (including the mobilization of enslaved African Americans in the Confederacy who repudiated their owners’ national project) to drive the Union’s war to a successful conclusion, in combination with the North’s superior material resources and its effective political and military leaders.

What we have seen in our recent wars is the attempt to substitute raw material superiority for national will and dexterous leadership—and its subsequent failure. The industrial (and post-industrial) advantages the US military holds over its adversaries in the Middle East and Afghanistan are indisputable. But for all its tactical victories in far-off venues like Kobane and Ramadi, President Obama’s self-defined goal of “degrading and destroying” the Islamic State remains far-off at best, and certainly impossible to reach by the end of this President’s term of office, even if Mosul is liberated from its clutches by the end of the year (as seems likely).

American society as a whole (along with its political leaders) seems unable to define in clear terms exactly what we hope to achieve in defeating the Islamic State, and what price we are willing to pay. Does the United States wish to bomb ISIS to smithereens, and then accept the necessity of significant numbers of civilians deaths in places like Raqqa? Or if it prefers a less heavy-handed solution to destroying the Islamic State, does our republic prefer to do the heavy military and diplomatic lifting necessary to stabilize both Syria and Iraq, which would require not only a commitment of significant numbers of American trainers and advisors, but a comprehensive diplomatic effort that invests scarce American political and economic capital in local allies? Finally, if the containment of ISIS is a more reasonable objective, are Americans willing to pay the moral price of allowing a genocidal movement inimical to our values flaunt its survival in the face of our moral posturing on Facebook and Twitter—while running the risk of further instability in both the Middle East and Europe and possible terrorist attacks in the United States?

Mosul’s impending liberation should not obscure this continued lack of clarity at the heart of our war against ISIS. In Iraq, ISIS will revert to the same shadowy insurgency that has survived over a decade of off-and-on Iraqi and American military efforts against it. In Syria, the United States does not even have the benefit of a weak if functioning state like the government of Iraq to partner with in its war against ISIS. Current restrictions on US involvement thus means the war efforts relies heavily on uncertain or politically problematic local allies that cannot deliver the political stability needed to eliminate the Islamic State, short of eradication through mass bombing. Yet the US government remains rhetorically committed to the goal of destroying ISIS, which only feeds into the terrorist group’s narrative of resolute survival against a global superpower. Furthermore, military action may contain ISIS as a territory-holding state, but may do little to restrict ISIS’s ability to construct and mobilize an international terrorist network with key nodes in Europe—and ambitions to strike the United States directly.

In response to these flaws in strategic conception and public rhetoric, Republicans in Congress criticize the current President for waging a feckless war, but most are remarkably silent on providing plausible alternative policies. The current Republican nominee for President has not even displayed a basic understanding of American foreign and defense policy. His Democratic rival possesses ample experience in foreign affairs, but on the campaign trail has only repeated the tired promise about no “ground troops” in Iraq and Syria—despite their very presence at that moment in Iraq and Syria under a President noticeably more reluctant to use military force than his probable Democratic successor.

Nevertheless, American elected officials reflect the sentiments of the voting public, and if their self-proclaimed desire to crush the Islamic State conflicts with the means they are in fact willing to deploy against ISIS, then it is because their constituents themselves have self-conflicted views of the matter. Whatever the many flaws of Northern democracy during the Civil War, Lincoln’s re-election represented electoral approval of extraordinary measures in support of an ambitious goal—the destruction of the Confederacy. In a wartime election, the Northern electorate ratified both a military objective, and the means to obtain the goal. Its political and military leaders then proceeded to combine that political capital with material means and military skill to obtain Union victory.

Instead of directing national political will and material means to obtain a plausible objective, both the American voting public and its political leaders seem content with the hope that our fabulous machines will resolve our contradictions for us—whether via Olympian lightning bolts delivered from the sky via manned or unmanned aircraft, or commando raids wielding the fruits of our post-industrial and wired economy. Until we resolve these contradictions, we can only hope that our machines will let us outrun what the Greeks called hubris.