Do Countries Have a Legal Obligation to Protect Refugees Fleeing Oppression? 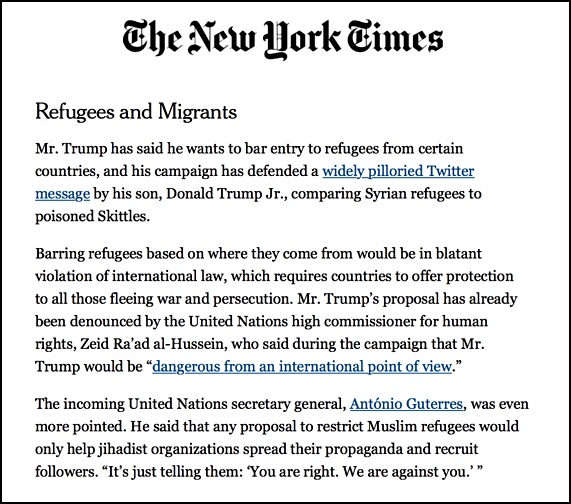 A recent article in the New York Times reports that Donald Trump’s proposed ban on refugees from select countries “would be in blatant violation of international law, which requires countries to offer protection to all those fleeing war and persecution.” The international laws that the NYT is likely referring to are the United Nation’s 1951 Convention Relating to the Status of Refugees and the 1967 Protocol Relating to the Status of Refugees.

The 1951 Convention followed the precedent set in 1948 by Article 14 in the Universal Declaration of Human Rights, which states that “everyone has the right to seek and to enjoy in other countries asylum from persecution.” Initially, the Convention’s purpose was to protect World War II refugees in Europe who were displaced prior to January 1, 1954. More than a decade later, the UN revisited the refugee crisis with the 1967 Protocol. The Protocol expanded the scope of refugee protection by amending the geographic and time constraints set by the 1951 Convention.

The Convention defines the term “refugee” as “someone who is unable or unwilling to return to their country of origin owing to a well-founded fear of being persecuted for reasons of race, religion, nationality, membership of a particular social group, or political opinion.” It also details the protections that refugees should be granted in the country where they are seeking asylum, including the right to work, education, and freedom of religion.

It is difficult to determine whether or not the New York Times is correct in asserting that Trump’s refugee ban would violate international refugee law. The 1951 Convention left the process of determining whether a displaced person meets the criteria to be considered a refugee up to the states—as long as the process is “fair and efficient.” According to Dr. Craig Arceneaux, coordinator of the Model United Nations program and a Political Science professor at California Polytechnic State University, “the very definition of a refugee can be open to debate” because of the vague wording of who may currently fear persecution and how a country determines the origin of it. Whether, for example, these laws apply to refugees fleeing a country on account of unequal gender rights is not clear.

In addition, the United Nations High Commissioner for Refugees (UNHCR) does not require that countries accept all refugees. A country may deny asylum if there is serious reason to believe that a person is guilty of, for example, a “crime against peace” or is “guilty of acts contrary to the purposes and principles of the United Nations.” Even if displaced persons are determined to be refugees, the UNHCR cannot force a country to accept them.

In general, according to James Milner, a political science professor at Carleton University and the co-author of UNHCR: The Politics and Practice of Refugee Protection, “states are bound by the principle of non-refoulement.” As defined by the UNHCR, non-refoulement is the practice of not expelling or returning “a refugee in any manner whatsoever to the frontiers of territories where his life or freedom would be threatened on account of his race, religion, nationality, membership of a particular social group or political opinion.” But it’s violated frequently. Just 10 countries host 60% of the world’s refugees.

According to the UN, “As long as people continue to be persecuted, there will be a need for the 1951 Convention and its 1967 Protocol.” These laws paved the way for additional refugee legislative action like the 1969 OAU Refugee Convention in Africa and the 1984 Cartagena Declaration in Latin America. The future of international refugee law will develop as global conflicts continue to rise and fall.