The Decline of the American Empire – And Hollywood’s

Dennis Broe is a professor at the Sorbonne and a European critic and corespondent for the Pacifica Radio Network. 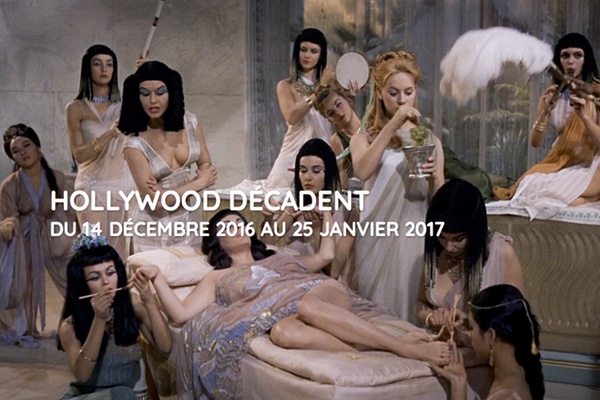 Currently playing at the Cinemateque in Paris, the world’s largest and most exhaustive film library, is a series titled "Decadent Hollywood" with a clever grouping of late classical studio era films that is both intriguing and that to my mind somewhat misses the point.

The Classical Studio era which denominates a mode of production, an aesthetic, and a zeitgeist is generally conceded to have had its hayday from 1930 to 1960. The majority of the films selected for screening in "Decadent Hollywood" were shot after that period, mostly in the early to mid-60s when the studio system, was not collapsing but altering under financial and cultural pressures that would eventually result in the (somewhat) loosening of the system that would mark the emergence of the breath of fresh air that was Hollywood’s New Wave.  This brought to prominence, if not quite to power, directors (Coppola, Scorsese, DePalma) influenced both by the French New Wave of Godard and Truffaut and by the cultural openings of the youth movement of the 1960s.

Meanwhile the studio system itself was ossifying with studio heads proving in some cases to be spectacularly out of touch with audience tastes and demands. Whole genres would collapse as some of Hollywood’s most popular moneymakers combined to produce maximum box office, but instead signalled the end of that particular melding of the musical and the western that was Paint Your Wagon, half-singing, half-dancing Clint Eastwood as you’ve never seen him before and, thankfully, would never see him again. The production system itself was also in the process of being remade with studios no longer assuming the debt burden of financing films. Instead, the studios began accepting or rejecting films brought to them as they relinquished their hold on creating films to exert an even stronger stranglehold on distribution (this often guaranteed profits without risk).

The Cinemateque series is heavily focused on sex in the forms of prudery (and its corresponding Hollywood cousin lasciviousness) in a mise-en-scene that is all the more excessive as it strains and bursts against the end of the censorship of the production code, finally significantly assaulted with Antonioni’s Blow-Up in 1966. So, the argument goes, in films like Splendor in the Grass, The Sandpiper, and Harlow a system that was increasingly becoming irrelevant moved to excess of costume, gesture and exaggerated emotion in place of more authentic attempts to grapple with the socio-cultural changes that were bubbling under the surface of a very repressed American society. Elizabeth Taylor in full Cleopatra regalia was the queen and epitome of this wanton but ultimately meaningless discharge of energy.

The series suggests the studio system was exhausted and that exhaustion was written into an increasingly gaudier art, camera and costume direction, but it does not suggest why other than in terms of its own industry. If we look just a little earlier, at the late 1950s or beginning 1960s, and especially at the empire genres, The Western and The Epic, a genre which reached its peak in this period, we see an equal retrenchment where the wide-open spaces of the West and the empire building of the Roman epic shrink or are contracted as the burden of the US as the world’s only superpower (that a still rebulding USSR could match it was largely a myth) begins to weigh on American shoulders. The US is watching the British and French empires fade in, respectively, Algeria and at the Suez Canal and is now stepping in itself to take the place of the defeated French in Vietnam in a way that far from hopeful in the wake of the French defeat at Dien Bien Phu looked at best like disastrous biding of time.

The classic expression of this exhaustion is Anthony Mann’s 1958 Man of the West with Gary Cooper the old reliable ethical cowpoke who had once again risen to the challenge of preserving civilization by thwarting those ruffians who would threaten Western US hegemony in High Noon here was back to do it again. But the wide-open spaces of empire, already shrinking to the main street of the town in High Noon, appearing in the expanse of the train ride of the former outlaw, Cooper quickly shrinks to the dark and gloomy interior of a dilapidated farmhouse as he must thwart a gang from fulfilling their childhood dreams of robbing a local bank. The mise-en-scene then is an enclosed, roped-off, tight space that encircles and traps its characters whose dreams of conquest are seen as petty. Cooper fakes an alliance with the thieves and thwarts the robbery but in leaving the farmhouse and venturing into the wider world outside allows another member of the gang to rape and pillage his female compatriot, who was captured with him by the gang. Mann would make this metaphor explicit a few years later in his aptly titled Fall of the Roman Empire, coinciding with Lyndon Johnson’s entry whole-hog into the morass of the Vietnam War.

After the violent spectacle of Ben Hur with the chariot race being perhaps the last moment of Hollywood’s believing in its own mythmaking power, Kubrick and Dalton Trumbo’s Spartacus, also partly directed by Mann, manifested the empire’s decadent exhaustion while looking both forward to the counterculture and backward to the strain of Hollywood resistant directors of the 1940s. On the decadent front, General Lawrence Olivier more than coyly seduces Tony Curtis. But homosexualty itself was not the problem. It was a manifestation of the abuse of power. Kirk Douglas’s Spartacus, appalled at the slaughter of the slaves, was rebelling against the empire.

In this reading it is not an abstract somnambulism or even just the upending of a production system that had generated steady though declining profits for 30 years that was felt and expressed through style and decor as exhausted. It was rather the burden of having to maintain constant control of a world that to this day consistently strains against US hegemony.