Review of Joel Whitney's "Finks: How the CIA Tricked the World's Best Writers"

William Bole is a senior writer and editor at Boston College. 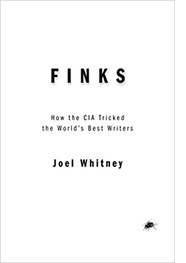 A foreign power stealthily intervenes in another nation’s affairs, manipulating media and disseminating propaganda to help sway an election. Joel Whitney has spent years looking into underhanded activity of that sort, but his subject is not Vladimir Putin’s Russia and its incursions into election processes in the United States and Europe. Whitney points the flashlight at the U.S. government in his book Finks: How the CIA Tricked the World’s Best Writers.

Whitney writes how the Central Intelligence Agency covertly spawned a worldwide network of media outlets, especially literary magazines, during the Cold War. The CIA used these outlets to further its geopolitical goals—an exercise in cultural diplomacy, or “soft power” in today’s lingo, as distinct from the agency’s hard power that included assassinations, coups, election-related bribery, and other intrusions. The general outlines of this story have been known for decades, but Whitney is clearly hoping to amp up the indignation over what he considers an historic disgrace. In particular the “literary CIA,” as he styles it, blurred the lines “between criticism, journalism, and the needs of the state; between aesthetics and the political requirements of the Cold War.”

Whitney, cofounder and editor at large of Guernica: A Magazine of Art and Politics and manager of arts and cultural programs at the Brooklyn Public Library, does throw substantial new light on one iconic literary journal—the Paris Review. Founded in 1953, the English-language publication was widely known for its interviews with such personages as Boris Pasternak, William Faulkner, and Gabriel Garcia Marquez. The journal serves as the central thread in this intricate narrative, into which steps other larger-than-life figures such as Ernest Hemingway, Fidel Castro, and legendary U.S. spymaster James Jesus Angleton. Co-founder Peter Matthiessen worked as a CIA agent in Paris at the time of the Review’s founding (an association revealed in 1977 by the New York Times). Whitney is probably going too far when he calls the Paris Review a “semi-official” publication of the Paris-based Congress for Cultural Freedom, which turned out to be a CIA front. He demonstrates, in any event, that the magazine connected with the Congress in a number of ways.

He describes his book partly as a “group biography.” It begins with letters in 1966 between the Review’s two other co-founders, Harold “Doc” Humes and George Plimpton, best known for his brand of participatory journalism that included quarterbacking for the Detroit Lions in preseason play. Humes wrote to Plimpton, the New York-based editor in chief, that he had just learned from Matthiessen that the publication initially served as a cover for the latter’s CIA activities (which apparently involved monitoring the French left), and he called on Plimpton to publicly divulge this fact. “Until this matter is righted I feel I have no honorable choice but to resolutely resign. Even if I have to split an infinitive to do it,” Humes playfully vowed.

For his part, Plimpton played down the entanglement; it was a time when the young, liberal, and Ivy League-educated felt drawn to the agency’s geopolitical mission. Plimpton’s own ties to CIA ventures, as the Review’s editor, did not become known until 2012 when years of archival correspondence between him and the Congress for Cultural Freedom were reported by Whitney in a Salon article. Plimpton had died in 2003.

The Paris Review had some direct links with intelligence operations, as Whitney amplifies throughout the book. Those had mainly to do with Matthiessen in the early 1950s and Paris editor Nelson Aldrich, who carried out duties for both the Review and the Congress for a few years until 1961. Some other links are circuitous, at best. Whitney writes that the Review “learned to tap the patronage” of the CIA, on which he elaborates by saying “the magazine was subsidized through government subscription and issue purchases.” The Congress’s official publications and other friendly ones also paid the Review for syndication rights to its interviews with luminaries such as the left-leaning Hemingway (there were about two dozen Congress-sponsored outlets in places ranging from Brazil and Nigeria to Japan and India). Those high-profile interviews were rarely overtly anti-Soviet. The CIA used the work to promote Western culture among left-leaning writers and intellectuals worldwide.

Much of that is worrisome, but does it mean the Paris Review “consciously aligned its mission” with the CIA’s propaganda network and “was part of a social and editorial nexus of organizations interested in the success of the covert state,” bound together “with militant, often violent and illegal operations,” as Whitney asserts? He does appear to overstretch the evidence, especially regarding the Paris Review, which is still running.

Looking beyond that journal, Whitney also devotes a chapter to a couple of instances in which the CIA censored articles in agency-funded publications. These included a 1958 essay by Dwight McDonald that depicted American life as “violent, crude, and without style” (Whitney’s words), a piece initially accepted by London-based Encounter, the flagship publication of the Congress for Cultural Freedom. The Congress was also publicly outed as a CIA-funded group in 1966.

In the end, I picked and chose among Whitney’s many blanket conclusions. For instance, his argument that these various organs, including the Paris Review, strayed from the “traditional adversarial role of media” seems fair enough; less evident is his assertion that they “behaved slavishly toward a perverse mission of the state.” And whether the CIA mimicked totalitarian-style thought control, as Whitney believes, is likely a proxy for where you come down on the perennial question of “moral equivalence” between the Cold War superpowers (in other words, whether we behaved almost as badly as they did in those days).

For most readers, the indignation will probably flow mainly from the CIA's truly despicable activities, not from its curious obsession with the editorial machinations of the literary elite.