Why is the U.S. So Committed to Saudi Arabia?

Aaron Brown is a PhD candidate in history at Ohio University and a fellow with the university's Contemporary History Institute. 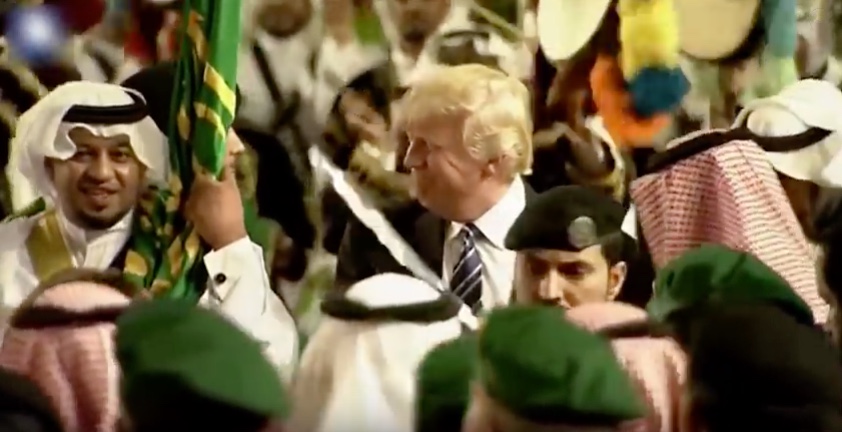 Every year or so the oil-rich Arab kingdom of Saudi Arabia makes American headlines for generally the same reasons. American leaders have made some kind of weapons deal with the Saudi royal family, have praised the monarchy for its commitment to fighting terrorism, or have met with Saudi oil executives to assure that crude and petroleum are flowing unhindered in Asia and Europe. Along with these news items are widespread condemnations of the U.S.-Saudi relationship and reminders that the ultra-fundamentalist Saudi regime is responsible for some of the most outrageous human rights violations on the planet.

American presidents speak frequently of the need to stand up for democracy and religious freedom in the face of radical Islamist tyranny, so why do they insist on backing a dictatorship that will not even allow for Christian churches to be built on Saudi soil? The answer to the question is both simple and complex. The simple answer is the most obvious, and is the primary reason Saudi Arabia is the wealthy powerhouse that it is – oil. But the more complex answer lies in the relationship between the two countries throughout four distinct periods of conflict – the Second World War, the Cold War, the 1991 Gulf War, and the War on Terror. The Saudis managed to placate the U.S. in each of these four global crises, granting oil concessions and military cooperation while pursuing a regional foreign policy often at odds with American goals and implementing increasingly draconian policies at home. The U.S. has viewed the alliance as valuable enough to overlook Saudi Arabia’s anti-Israel foreign policy and its espousal of Islamic fundamentalist ideology.

When the U.S. entered the Second World War, it did not view Saudi Arabia as an indispensable partner. The kingdom, barely a decade old, had a better relationship with the British, who still had a sizable amount of influence in the Middle East at the time. But the U.S.-Saudi relationship changed significantly over the course of the war as the Americans came to view Saudi oil as, in the words of Franklin D. Roosevelt’s Secretary of State Cordell Hull, “one or the world’s greatest prizes.” The American war effort required an abundance of this natural resource, and the Saudis were more than happy to provide it. In 1943, the Roosevelt administration extended lend-lease aid to the monarchy and by 1945 the Americans and British were competing for better access to Saudi oil with lavish gifts such as luxury automobiles and airliners. The Saudi ideological position on the war effort was rarely addressed, nor was its style of governance. Though not much is known about the Saudi ruling family’s views on Nazi Germany, it is likely that some Saudis (including patriarch Ibn Saud) supported Hitler’s anti-Semitic policies to some degree, as the German leader (along with the allied powers) did try and recruit from the Arab world. Regardless, access to oil came to define the U.S.-Saudi relationship during World War 2, and would continue to do so.

During the Cold War, the U.S.-Saudi relationship strengthened, as both countries viewed the Soviet Union as a threat to Persian Gulf oil. But two major events complicated the alliance during this period. First, American support for Israel during the Yom Kippur War of 1973 prompted Saudi Arabia (a major financier of Israel’s Arab opponents) to participate in the OPEC embargo of oil shipments to the U.S. later that year. And second, the Iranian Revolution of 1979 provided a menacing Shiite challenge to Saudi supremacy in the Persian Gulf. Initially, the Reagan administration believed that it could unite Israel and its Sunni Arab neighbors against archenemy Iran, but this effort proved futile. When the administration sold AWAC aircraft to the Saudis in 1981, the Israelis were incensed. Reagan’s officials decided to appease Tel Aviv with a series of joint military exercises, but these maneuvers angered the Arabs. Israel’s annexation of the Golan Heights in Syria and its invasion of Lebanon in 1982 further inflamed tensions. By the end of Reagan’s presidency, the Middle East had descended into serious sectarian warfare and the U.S. was heavily involved in the region.

But the relationship between Washington and Riyadh survived. In fact, it enjoyed perhaps its most fruitful period in the early 1990s, when Iraqi dictator Saddam Hussein’s army invaded Saudi neighbor and ally Kuwait and threatened to control a large percentage of the Gulf’s oil. The Saudi monarchy made a major concession, allowing the U.S. to station hundreds of thousands of troops on its soil in order to fight off the Iraqi advance. The effort was successful, but the presence of American troops on Saudi soil (considered holy land) enraged fundamentalist Muslims throughout the region (including Saudi jihadist Osama bin Laden) and forced the regime to confront what had been lurking in the darkest corners of the country for a couple of decades – Sunni radicalism.

When Osama bin Laden sent his al-Qaeda fanatics to attack the World Trade Center and Pentagon on September 11, 2001, the U.S.-Saudi relationship faced its most serious challenge to date. The fact that a majority of the hijackers were Saudi posed a serious problem for the alliance, and raised the question of just how much of a role the royal family played in financing the atrocities. This question has still not been answered to the satisfaction of most Americans, and the Saudi regime does little to assuage suspicions that it fully supports radical Islamist ideology. Plus, Saudi Arabia is now involved in a proxy war against its archrival Iran for dominance of the Persian Gulf region. Nowhere is this more evident than the civil war in neighboring Yemen, where the Saudis regularly bomb civilian areas in an effort to crush an Iranian-backed Shiite insurgency there. Despite all of the setbacks and the questions, however, the U.S. and Saudi Arabia remain steadfast partners. Why? Because the Saudis once again have proven to the U.S. that they are willing to support it in its major foreign policy objective while guaranteeing a steady flow of oil to large swaths of Asia and Europe. Though the Saudis enforce a strict brand of sharia law at home, frequently behead or imprison those who break this law, and espouse an extreme Islamist ideology, they have remained a loyal ally in the American fight against Islamic State in Syria and Iraq. And, though the U.S. relies less on Mideast oil than it once did, it recognizes that a stable and oil-producing Saudi Arabia is vital to the stability of the region.

All of these factors considered, it is crucial that American leaders ask a couple of big questions. First, is maintaining the U.S.-Saudi relationship in its current condition worth all of the other headaches that accompany it? The Saudis have always opposed the state of Israel and are comfortable with radical Islamist ideology – aspects that would otherwise raise the hackles of American policymakers. And second, if the relationship is worth preserving in its current state, is it worth getting further involved in Saudi Arabia’s proxy war against Iran? Iran is ruled by an equally rigid Islamic dictatorship that has financed terror abroad, but its citizens have generally expressed more of an openness to making amends with the Americans after years of hostility. Recently, though, President Trump has made an effort to further marginalize the Iranians and reinforce American commitments to Saudi Arabia and the oil-rich Gulf states. Part of this stems from Trump’s disdain for Obama’s nuclear deal with Tehran, but it is also in keeping with a much longer tradition of U.S.-Saudi cooperation. It is uncertain as to how well this strategy will pay off, but history has proven that one thing remains certain – the Saudis will continue to enjoy a significant amount of American support as long as they supply oil to American allies and assist the U.S. in at least one major foreign policy objective.