Review of David McCullough’s “The American Spirit: Who We Are and What We Stand For”

Kathryn Smith is author of The Gatekeeper: Missy LeHand, FDR and the Untold Story of the Partnership that Defined a Presidency (Touchstone). 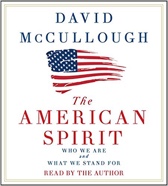 David McCullough is an American treasure, a historian for the masses whose books have also won critical acclaim and prestigious honors such as the Pulitzer Prize. He’s also a terrific speaker who has given addresses in venues ranging from small college campuses to the U.S. Congress.

McCullough chose 15 speeches given during the past quarter century for his collection The American Spirit: Who We are and What We Stand For (Simon & Schuster). They include commencement addresses, joint sessions of Congress and, most touchingly, a naturalization ceremony for new American citizens at Monticello, home of Thomas Jefferson, on July 4, 1994. Jefferson—and John Adams—had died on that day in 1826.

Not surprisingly, McCullough draws heavily on his own research and writing for his talks. His heroes include the Adams Family—John, Abigail and John Quincy, that is; Theodore Roosevelt, who was “like nobody who had ever been president before” (in a good way); and the courageous accidental president, Harry Truman. In one of my favorite chapters, delivered at Lafayette College in Easton, Pennsylvania, he talked about America’s ties with France, drawing on his outstanding book about Americans in Paris, The Greater Journey. The essays are beautifully illustrated with color reproductions of paintings and photographs.

The book opens with a speech before a joint session of Congress in 1989, marking the bicentennial of that institution. He told of a clockmaker named Simon Willard who created the works installed in a piece of sculpture there in 1837. He cut the works freehand and, more than a century later, it was still keeping perfect time. McCullough closes the book with a talk to the U.S. Capitol Historical Society last year when he again references Simon Willard’s clock—still keeping perfect time.

Like Simon Willard, some of the people in this book are little known or long forgotten. Benjamin Rush, a signer of the Declaration of Independence, was “among the outstanding Americans of all time,” he asserts. “Physician, professor, patriot, inexhaustible reformer, he set things in motion and set an example…. His interests were all-encompassing—smoking chimneys and earthquakes, ballooning, old age, diet, cocks and microscopes, cooking, posture, mineral springs, good government, and sugar maple trees.”

The book is peppered with the likes of good Dr. Rush. It makes you want to find out more about some of these heroes. And that is McCullough’s intention. History is important; it’s also fascinating.

Some of the essays are a mite repetitious. I grew just a little tired of John Quincy Adams, who had to be carried out of Congress feet first (he served in the House after his presidency). But he was indeed an outstanding example of the people who set America on its course to greatness.

We need someone like that—many people like that—so badly now. We need leaders, as McCullough says again and again, who read and understand our history. In his foreword he writes, “Many a time I have gone off on a speaking date feeling a bit down about the state of things and returned with my outlook greatly restored, having seen, again and again, long-standing American values still firmly in place, good people involved in joint efforts to accomplish changes for the better, the American spirit still at work.”

Bravo to this fine author, who is still going strong—and speaking out—at 83.