Robert T. Souza is a Middle East Research Analyst at the Center for the Study of Targeted Killing. Robert holds an MA in International Relations with a concentration on terrorism and sub-state violence from Suffolk University. His work has been published in the CTC Sentinel, Middle East Policy, and The Huffington Post. 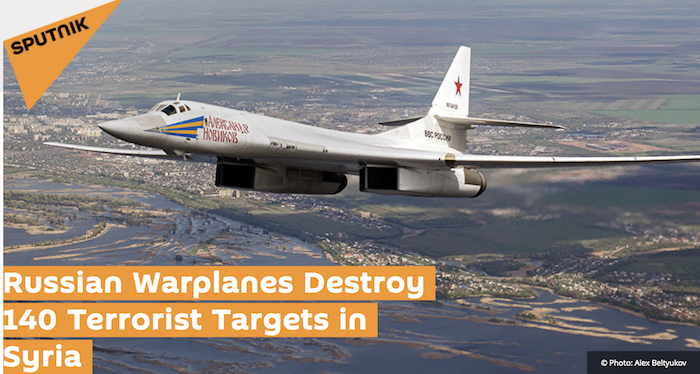 Screenshot of headline at Sputnik International

The Russian Federation is now claiming credit for having killed the elusive ISIS leader Abu Bakr al-Baghdadi. The Russian Defense Ministry said via Facebook on Friday morning that, on May 28, one of its airstrikes in Syria struck a command post hosting a meeting of ISIS leaders, possibly assassinating the man who boldly claims to be the shadow of God on earth. The claim read as follows: “According to information which is verified through various channels, the meeting was also attended by the leader of ISIS, Ibrahim Abu Bakr al-Baghdadi, who was also killed during the airstrike.” The statement also said the airstrike killed 30 midlevel ISIS field commanders and as many as 300 militants who made up their personal security.

Absent independent confirmation of al-Baghdadi’s death, it would be wise to remain deeply skeptical of such astounding claims emanating from Moscow. Not only is Friday’s assertion consistent with years of Russian disinformation regarding its so-called counterterrorism campaign in Syria, but it also runs counter to established ISIS tactics and realities on the ground.

Consider when, back in November 2015, a squadron of Russian strategic bombers launched a large-scale attack on the Idlib and Aleppo provinces in northwestern Syria. Following the attack, the Russian Ministry of Defense claimed: “During a massive airstrike today, 14 important ISIL targets were destroyed by 34 air-launched cruise missiles. The targets destroyed include command posts that were used to coordinate ISIL activities.” But there was one major problem with this statement: ISIS did not have forces in Idlib or the areas of Aleppo that were targeted in the air attack. Among the Russian targets in this northwestern region were actually several US-backed groups known more for their opposition to the Assad regime, such as the Free Syrian Army, Sham Legion, Jaish al Sunna, and Division 13.

To support the Kremlin’s narrative that it was conducting pinpoint strikes against ISIS, the Russian Ministry of Defense released YouTube videos of several airstrikes purportedly against the terrorist group. However, these videos were subsequently scrutinized by investigative journalists using a collaborative verification platform to match the locations seen in the YouTube videos with satellite images from the air, as well as ground level photographs, which established that Moscow’s claims contained numerous elements of Soviet-style dezinformatsiia (disinformation). Indeed, most of the targeted areas identified were without even the slightest ISIS presence, let alone command posts used to coordinate terrorist activity.

Putting aside Russia’s track record of deliberate fabrication of events concerning its counterterrorism operations, Friday’s statement also contradicts the reality on the ground in Syria. Russia proclaimed this airstrike took place on the outskirts of Raqqa, the capital of ISIS’s self-styled caliphate in Syria, where a massive US-supported assault by Kurdish and Arab fighters has been ongoing for months. To escape the inevitable encirclement by US proxy forces on the ground, most of ISIS’s leadership in Raqqa fled south down the Euphrates long before late May, when Russia claims this airstrike took place.

In the unlikely event that al-Baghdadi stuck around Raqqa, why in the world would he, a shadowy figure of a man known for taking elaborate security measures to ensure his safety, recklessly endanger himself by attending such a large meeting? An ISIS get-together of this magnitude (300+ militants as Russia claims) would make everyone involved an easy target for Coalition air power, and this is something ISIS has long understood. Since the United States’ air campaign against ISIS commenced in August 2014, the terrorist group has made a conscious effort to avoid such large gatherings for precisely this reason.

At the end of the day, Russian policy in Syria is one of blood, fire, and most importantly, deception. Unless the Kremlin releases definitive evidence that a Russian airstrike killed al-Baghdadi, Friday’s claim should be taken with a grain of salt. It appears Russia is lying just as it has in the past about its counter-ISIS operations in Syria, and at this point there is no reason to believe otherwise. There have been numerous false claims of al-Baghdadi’s death since he stepped out of the shadows and declared the resurrection of the caliphate in 2014, and this one should probably be added to the list.