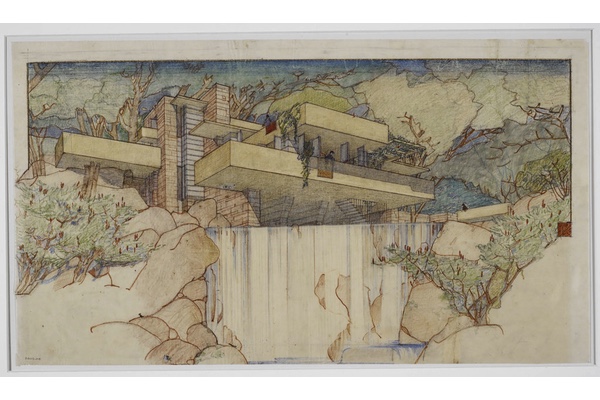 Frank Lloyd Wright was to architecture what Michelangelo was to painting. They were both geniuses, both eccentric and their works will live forever.

The iconic Wright would have been 150 years old this year and in his honor the Museum of Modern Art in New York is staging a large exhibit of his work – drawings, photographs, journals, letters – that shows Wright not only as the acclaimed designer and builder of some 520 structures, but a man whose imaginative designs for buildings that never came to fruition marked him as an architect of incredible vision and staggering foresight.

The goal of the curators at the museum, at 11 W. 53rd Street, is to showcase Wright’s works as those of an American master of design – the museum curators label him “America’s greatest architect”  – but they do much more than that in the exhibit.

The exhibit, Frank Lloyd Wright at 150: Unpacking the Archive, is dazzling, a huge gallery full of fantastic, huge design drawings, intriguing videos, floor plans, front, side and back sketches of houses, photographs and a dozen or more fascinating models of his work, and works never completed. It shows him as not just an architect but an art, architecture and design Wizard of Oz, the man who not only created gorgeous and unique and extravagant homes, buildings, churches and office parks, but a man who redesigned cities such as Chicago and New York and provided sweeping drawings of his work, way back in the 1930s, that even today look like science fiction, a world of the future drawn by an architect from the past.

He is most famous for a dozen or so well-known buildings, such as the Guggenheim Museum in New York, the now gone Imperial Hotel in Tokyo, the Fallingwater residence of Pittsburgh department store owner Edgar Kaufman, the Johnson Wax Headquarters, the never built mile high skyscraper in Chicago and the Unity Temple, a Unitarian church in Oak Park, Illinois, where he lived. He designed many buildings that were never constructed and numerous buildings, parks and urban complexes on his own, without pay.

How did he become so famous? First, he thought big. “He was very much involved in landmark buildings, structures people would remember,” said MoMa curator Barry Bergdall in one of the exhibits videos.

Second, scrumptious homes. He built several dozen all over America and their owners, wealthy men and women, spread the word about his work and invited writers and photographs into their Wright homes.

Third, he was a publicity wizard. The exhibit is full of newspaper and magazine articles and television interviews about him, most generated by the publicity office in his empire.

The exhibit is so successful because it has something for everybody. There are models (the five-foot-high tower model for St. Mark’s church in New York is brilliant), videos, You Tube style talks from curators, television clips, Wright designed furniture, windows and fabrics. The richness of it is impressive. The color thunderstorm of Wright and his draftsmen leaps off the drawing and whirls before your eyes and its complexity is amazing.

The exhibit is informative, too, because it shows the work of the short, thin architect who almost always wore an odd hat as a young man in the 19th century and then as a mature and growing man in the 20th. He moves through organic designs to luxury homes to urban landscapes over the years. You can track his growth as administrator of two studios he opened for young architects, Taliesin, in Wisconsin, and Taliesin West, in Arizona. You see him grappling with farm problems, city problems and the troubles average Americans face in their homes. Design grew with him, but his designs grew with history.

Wright (1867-1959) was known as an “organic” architect because his buildings fit into the natural environments in which they were located. The most famous was “Fallingwater,” a home in Pennsylvania built over a creek and waterfall that blended into the forest that surrounded it, but there were many others with that same organic design.

His farm designs were both beautiful and functional. “(The little farms unit) is a little-known model of an experimental farm that Wright designed in 1932 (that) reveals reveals how the architect utilized back-to-the-land strategies during the Great Depression, with the goal of allowing people to lead independent, productive lives and derive sustenance…from nature,” said curator Juliet Kinchin in a statement.

Wright, who never graduated from college, started working for small architectural companies in Chicago and in the early 1900s started his own office. He soon began hiring draftsmen and junior designers. The office, and Wright’s reputation, grew rapidly.

The museum’s exhibit comprises 400 works made from the 1890s to through the 1950s, many from the archives of his Chicago office.

The exhibit is drawn from his famous archive, that he began to keep as a young architect. Almost all of his drawings and photographs were held by him and saved for posterity. Wright’s archive includes 55,000 drawings, 300,000 letters, 125,00 photographs and 2,700 manuscripts

I went to the museum on a warm Sunday afternoon and was impressed with the huge crowd and his army of admirers, young and old, single people and couples, and people from all walks of life.

The exhibit revolves around the designs of several famous buildings, such as the Unity Temple, the Johnson Wax Building, the Imperial Hotel and the lovely, low-slung, ‘L’ shaped Marin County Civic Center. Each is shown as a process of discovery and the museum curators give you a rather complete view of the construction of the buildings as well as how Wright saw them as a piece of community life. You get to see the floor plans, front and side views and how the structures looked on the property that surrounded them. The exhibit also has numerous drawings and models for structures that were never built., such as the twenty-some story tower that was supposed to be built next to St. Mark’s Church in New York. The church board rejected the gorgeous white tower because they said, it was “too radical” in design and not only would not fit into to the look of the church, but would not fit in to the look of New York City (the museum website has a nice video piece on the tower). Another drawing is of the never built desert hotel that he spent so much time on. Wright even designed an irrigation system for it. There is a large drawing, too, of an entire development of homes in California that was never built. There is a huge exposition of his fabled never built Mile High Skyscraper in Chicago. There is the original sketch, that is a towering eight feet high, and a collection of blueprints and sketches.

Elizabeth Hawley of the City University of New York, said that an unlooked aspect Wright’s legacy was his studies of Native America life in the early 1900s. “Wright was keenly interested in Native American culture when native culture was widely celebrated as an authentic expression of American identity,” she said. u

The exhibit devotes a large amount of space to his never built Nakoma Resort Hotel, a startling building in which the tops of Native American wigwams are built into the roof of the main hotel to celebrate the heritage of local tribes.

There is a magazine cover he drew that shows his futuristic view of the American city, with numerous overhead pedestrian walkways and multi-level streets. He drew it in the 1930s and scenes that look like they were based on it continually pop up in modern science fiction movies.

One of the things that makes the exhibit so rewarding to see is that is designed for the ordinary American. It is simple, it is brilliant and it is something every can enjoy. No architectural math equations and no explanations of how certain steel girders are needed to support ‘x’ number of people walking across a hotel floor. Another rewarding aspect of it is how it explain how Wright never really changed as American history changed; he waited for American history to catch up to him.

This exhibit about American architectural history is monumental. It runs through October 1.