Annelise Orleck is professor of history at Dartmouth College and the author of five books on the history of US women, politics, immigration, and activism, including Storming Caesars Palace: How Black Mothers Fought Their Own War on Poverty. Her latest book is "We Are All Fast-Food Workers Now": The Global Uprising Against Poverty Wages, from which this article is excerpted. She lives in Thetford Center, Vermont. 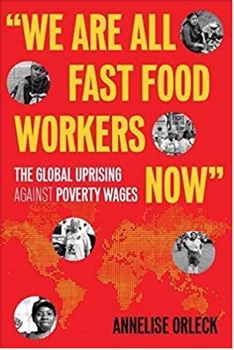 Capitalism is ravaging the working class from one end of the globe to the other.

This book is a departure for me. It is the work of an Americanist thinking globally, a historian reflecting on the present and recent past. It is not a conventional work of scholarship, though it is based on abundant research: 140 interviews; government documents; foundation reports; news coverage; organizational websites and records; insights from scholars of labor, globalization, transnational capitalism, and agribusiness. I make no pretense of objectivity. This is an uneasy hybrid: data, storytelling and analysis, politics, polemics and poetry. And it is a history of sorts, I have come to realize—an urgent history of now.

I began this work because I felt called on in a time of globalization, as an ever-spreading flood of capital transforms our world, to better understand how low-wage workers are starting to resist, to think and act globally as well as locally. Since that time, I have spoken to many workers about what moved them to rise against poverty wages. These conversations transformed what I see, think, and feel every time I buy a shirt or a flat of berries, shop at a big-box store, check out of a hotel, or drink clean water from my kitchen faucet.

Researching this book was revelatory. I traveled across the United States and to parts of the world I had never before visited. I drove, flew, walked, rode in open-air tuk-tuks and on the backs of motorcycles. With photographer Elizabeth Cooke, I conducted interviews in windowless worker dormitories, union offices, and on the streets, at protest marches, in city council hearing rooms, in brightly lit restaurants and shaded back rooms, in elegantly shabby colonial hotels, at factory gates, by phone and via Skype.

I interviewed in English, my native tongue, and with interpreters, in Spanish, Khmer, Tagalog, Visayan languages, Bangla, Mixtec, and Zapotec. Oxnard translator Yessica Ramirez navigated the distinct dialects spoken by indigenous Oaxacans. In Manila, Joanna Bernice Coronacion deftly switched back and forth between Tagalog and English, and Jamaia Montenegro translated from the Visayan languages spoken in the southern Philippines.

And then there was Vathanak Serry Sim, who works for Solidarity Center in Phnom Penh. Vathanak translated from the Khmer language but also revealed Phnom Penh as an incredible text—beautiful, ugly, inspiring, devastating, punctuated by traffic circles and imposing government buildings, colorful Buddhist temple complexes and labyrinthine alleyways. He seemed to know every trade unionist in the country, along with the nuances of their politics, battles, and backstories. As a child survivor of the Khmer Rouge death camps, Vathanak also bridged the profound chasm that divides Cambodians who lived through the genocide from the young millions who were born afterward. Again and again, Vathanak tried to explain, as best he could, much that is impossible to understand.

I learned also from those who did a different kind of translation, opening to me worker cultures of resistance and struggle: Tampa organizers Kelly Benjamin and Bleu Rainer introduced me to Fight for $15 activists; Tg Albert and Heather Nichols to Southern California Walmart activists and Providence hotel workers; Donna Foster and Arcenio Lopez to the Mixteco farmworkers of Oxnard; and Rutgers graduate student Nafisa Tanjeem to the garment worker activists of Bangladesh. It was an enduring gift to spend time with Kalpona Akter—as she passionately, patiently, humorously, and angrily reflected on the long and ongoing struggle of the women and men who make clothing for the world.

There were moments in the process of researching and writing this book when I felt a gnawing sense of worry as I wondered how I would tie together and make sense of all that I was seeing and hearing. I paused for a deep breath. But for the most part, I didn’t panic. Because deep inside me, I felt certain that the people I was meeting, the kaleidoscopic fragments of stories and experiences they shared, were part of one larger story.

What I saw in New York City and Los Angeles, Manila and Phnom Penh, were ravages of neoliberalism—the brand of global capitalism that has swept our world since the late twentieth century. And the forms of resistance I encountered were, similarly, part of a larger struggle. Though rooted in and motivated by local politics and history, the activists I spoke with were all engaged in fighting the same things: poverty wages, the disappearance of public services (education, health care, water), the transformation of workers into independent contractors (and with that a loss of seniority, benefits, pensions), disrespect, sexual harassment and violence, mass evictions and disregard of people’s land rights. What follows are some stories of their resistance—their struggles, their losses, their victories, their visions for the future.

When I began this book Donald Trump had not yet been elected president of the United States. As the book goes to press, the US and many parts of the world are just coming out of a period of shock and mourning that followed the election. Listening to the activists whose words animate this book has been healing for me, inspiring.

US activists, especially African American and Latinx workers, reminded me that their battles had begun long before Trump, and that they planned to keep on struggling as they had for centuries. Outside the US, activists facing crackdowns by the murderous Duterte regime in the Philippines, as well as the brutal regimes of Sheikh Hasina in Bangladesh and Hun Sen in Cambodia, put our inward-looking American grief in perspective. The world is both bigger and smaller than I ever knew before I began work on this book. And though the forces arrayed against low-wage workers are powerful, and often violent, the spirit, creativity, courage, and stamina of this global uprising are seemingly endless. With all that I have learned as I researched this book, I am left with feelings of hope and possibility.

Excerpted from “We Are All Fast-Food Workers Now”: The Global Uprising Against Poverty Wages by Annelise Orleck (Beacon Press, 2018). Reprinted with permission from Beacon Press.