You remember when the United States defaulted, don’t you?


Sebastian Edwards wants you to remember it happened and it was FDR who did it. Edwards is the Henry Ford II Professor of International Economics at the University of California, Los Angeles. His books include Toxic Aid: Economic Collapse and Recovery in Tanzania and Left Behind: Latin America and the False Promise of Populism. He lives in Los Angeles. 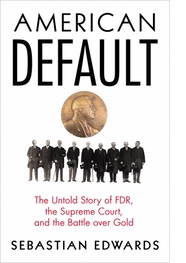 The American economy is strong in large part because nobody believes that America would ever default on its debt. Yet in 1933, Franklin D. Roosevelt did just that, when in a bid to pull the country out of depression, he depreciated the U.S. dollar in relation to gold, effectively annulling all debt contracts. American Default is the story of this forgotten chapter in America’s history. At a time when several major economies never approached the brink of default or devaluing or recalling currencies, American Default [by Sebastian Edwards] is a timely account of a little-known yet drastic experiment with these policies, the inevitable backlash, and the ultimate result.

Americans believe that the Federal government has never defaulted on its debt. Yet in your book, you tell the story of a massive debt restructuring that happened only eight decades ago, in 1933. A debt restructuring that changed contracts unilaterally and retroactively, and imposed losses of 61% on investors. Why do you think that this episode is so little known?

Sebastian Edwards This is a case of “collective amnesia.” Americans think of themselves as law-abiding citizens. We think of the United States as a country where institutions work and where contracts are sacred; a country where the rule of law prevails at all times. Reneging on contracts is not something this nation does. And, certainly, we don’t change contracts retroactively. It is something that “banana republics” do. And when they do it, we scold them and denounce them. We also demand compensation for damages.

When the Supreme Court heard the gold clause cases in 1935, most analysts thought that these were among the most important cases ever considered by the Court. Today, however, they are not even taught in most law schools. We have forgotten the episode because it is convenient, because it helps us maintain the view we have about our nation: a nation that always pays its debts. But, as I show in this book, this is not the case.

Your book is about the annulment of the gold clauses in 1933, and the Supreme Court decisions that ruled that it was legal to change debt contracts retroactively. What were the gold clauses, exactly? And what was their role?

Historically, most long-term debt contracts in the United States were written in terms of gold. That is, the borrower committed himself to paying back an amount of gold (or gold equivalent) equal to the amount borrowed, plus interest. This practice started during the Civil War to protect lenders from possible inflation.

In 1933, when President Franklin D. Roosevelt took the U.S. off the gold standard, all public debt included the gold clause. In addition, most railway and public utility bonds had gold clauses, as did most mortgages. Overall, debt equivalent to approximately 120% of GDP was subject to these escalation riders. That is a huge number. To put things in perspective, it is about twice as large as the debt that Argentina restructured unilaterally in 2002.

You write that the abrogation of the gold clauses was closely related to the abandonment of the gold standard in 1933.

In 1933, President Roosevelt thought that the U.S. could benefit from devaluing the dollar with respect to gold. This had been done by the United Kingdom in September 1931, and it appeared to be helping the UK get out of the depression. However, FDR was told by his advisers that the gold clauses stood in the way of a devaluation. With the gold clauses in place, a devaluation of the USD would immediately trigger an increase in debts by the same amount as the devaluation. This would bankrupt almost every railway company, and many other businesses. It would also be extremely costly for the government. It was at this point that FDR decided to abrogate the gold clauses. The actual annulment took place on June 5, 1933.

When emerging countries, such as Argentina, devalue their currency and restructure their debts, we often brand them as “populists.” Was there a populist element in FDR’s decision to abandon the gold standard and abrogate the gold clauses?

One of the main issues in 1933 was how to raise agricultural prices, which had declined by almost 70% since 1919. After the 1932 election there was a large bloc of populists, pro-agrarian members in Congress. The better known one was Senator Huey Long, but there were others. Two very influential ones were Senator Elmer Thomas from Oklahoma, and Senator Burton Wheeler from Montana. They were “inflationists,” and believed that getting off gold would help increase commodity prices. To a large extent the devaluation of the dollar—from $20.67 to $35 per ounce of gold—was to placate this group of “populist” lawmakers. Wheeler was also an isolationist. In Philip Roth novel The Plot against America, Wheeler is a fictional vice president, and aviator Charles Lindbergh is the president.

There are still some people who believe that getting off gold was a mistake. Was it necessary? Did it work? Should the U.S. go back to gold?

Most economic historians—including Milton Friedman and Ben Bernanke—agree that one of the main consequences of devaluing the dollar in 1934 was that the country received a huge inflow of gold. This additional gold was monetized by the Federal Reserve. As a consequence, there was a large increase in credit. This triggered a recovery, and helped reduce unemployment. A key question, which I address in the book, is whether it was possible, at the time, to put in place an expansionary monetary policy and still maintain some form of a gold-based standard. This is a controversial issue; British economist John Maynard Keynes believed that it was possible; many modern economists believe that it was not.

You argue in the book that at the time most economists were perplexed and didn’t know how to face the Great Depression. Apparently they didn’t understand the effects of fluctuating exchange rates.

You write that in 1933 George F. Warren was the most influential economist in the world. However, today almost no one knows his name. Who was he, and why was he so important?

George F. Warren was a professor of agricultural economics at Cornell, and a friend of Henry Morgenthau Jr.

Morgenthau was a neighbor and friend of President Roosevelt, who eventually became Secretary of the Treasury. In 1931, Warren published a book titled Prices, where he argued that agricultural prices were related in a one-to-one fashion to the price of gold. If the price of the metal increased through a devaluation of the USD, the price of wheat, corn, cotton, eggs and so on would increase immediately and by the same amount. Starting in July 1933, Warren became Roosevelt’s main economic adviser. In October the president put in place a “gold buying program” based on Warren’s theories. Every morning FDR would determine an arbitrary price at which the government bought small amounts of gold. The president’s expectation was that agricultural prices would follow in short order. But that didn’t happen; the program did not work as expected. John Maynard Keynes criticized it strongly, and in January 1934 the program was abandoned. In the book I discuss, in great detail, Warren’s theories and I compare them to those of other prominent economists, including Irving Fisher’s.

You devote quite some time to the cases argued in front of the Supreme Court. What can you tell us about them?

At the time, the Court was deeply divided. There was a conservative bloc led by Justice James Clark McReynolds, and a liberal bloc that included Justices Brandeis and Cardozo. Charles Evans Hughes, the Chief Justice, was often the swing vote. The cases were fascinating for several reasons; first, the Administration used a “necessity” argument to support the Joint Resolution that abrogated the gold clauses. This argument is very similar—in fact, almost identical—to the argument used recently by countries such as Argentina when restructured their debts unilaterally. Second, the government made very sophisticated economic arguments; in order to support them, it included a number of charts and diagrams in its briefs. Third, the rulings were very convoluted and controversial. In the case involving public debt (a Liberty Bond, to be more precise), the Court ruled that Congress had exceeded its power, and that the abrogation was thus unconstitutional. However, the Court said, there were no damages involved. That is, the government had violated the Constitution, but didn’t have to compensate bond holder for losses.

In modern times, countries that default and/or restructure their debts unilaterally pay a cost. Generally speaking, they have great difficulties accessing the capital markets. However, this was not the case for the U.S. What do you think are the reasons for this?

I discuss this issue in great detail in the book. Milton Friedman argued that by expropriating property rights the abrogation had severe negative effects on the U.S. economy. It negatively affected investment. I combed the data and didn’t find significant dislocations or signs of distress in the weeks and months following the Supreme Court rulings. In the final chapters of the book I give a possible explanation for this. I point out why the U.S. case is so different from recent default episodes, including Argentina and Greece.