You Think Your Boss Is Bad? 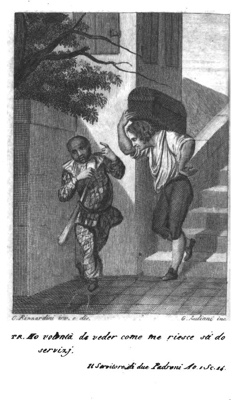 The Servant of Two Masters - Truffaldino: "Ho volontà de veder come me riesce sti do servizi." English (I'd like to see how I'll manage to serve two [masters].)

That’s right – two bosses. That is the situation for Venetian servant Truffaldino when he arrives in Venice with his boss, Federigo Rasponi, in 1743. It isn’t his boss, though, but his boss’s sister, Beatrice, dressed as a man, trying to collect a dowry for her brother’s marriage to Clarice. Her brother was killed in a duel by Beatrice’s boyfriend and has fled.

The stumbling, bumbling Truffaldino soon meets a new arrival in Venice, who turns out to be boyfriend Florindo and winds up as manservant to him at the same time he is servant to Beatrice/Federigo. Confused?

Well, there is confusion all over Venice, from one canal to another, in The Servant of Two Masters, a delightful farce of a play by Carlo Goldoni, a giddy, hilarious romp through 18th century Italy with a group of comic characters who would give the Marx brothers a run for their money. It opened Wednesday at the Shakespeare Theater of New Jersey’s outdoor theater at St. Elizabeth’s College, Convent Station, N.J.

Yes, it opened and the heavens opened, too. On opening night, it started to rain while I was picnicking on the vast lawns that surround the theater. Did you ever have chicken salad a la raindrops? Very tasty. Five minutes after I sat down in the theater, a few minutes after the first act began. It started to rain again. The rain was coming down from the heavens in buckets. I was soon sitting in the middle of what appeared to be Lake Michigan. Oh, did it rain. The whole theater was a sea of umbrellas. Finally, they halted the play. After about twenty minutes, the rain stopped and the play continued. I wrapped up my umbrella, wrung the water out of my pants, sat back and enjoyed the show.

The undisputed star of The Servant of Two Masters is the tall, thin, Truffaldino, played with wondrous aplomb by James Michael Reilly. He steals the show from the moment he knocks on Clarice’s door and meets her father, Pantalone, to the very end of the play, when he cavorts throughout the marvelous Venetian neighborhood set (by Jonathan Wentz).

Pantalone’s life is a mess. His daughter Clarice is now engaged to the thoroughly likable Silvio, who has to hold her versus re-emerged Federigo/Beatrice and stumbles his way through the play. Beatrice keeps her identity secret from Pantalone and his buddy, Lombardi. Florindo, at a nearby Inn, moves about town unseen by anybody except poor Truffaldino, who is doing a fine job as servant to both Beatrice and Florindo.

The plot of the play is rather simple. The strength of the play is that wonderful farce that it presents. It is hard to imagine a play that is so funny and exquisitely timed as this one written over 250 years ago. Goldoni must have been the life of every party he attended.

Audiences learn much history about life in Venice in 1743, when the canal city was one of the major urban areas of the world, full of restaurants, theaters and music. This is a story about wealthy Venetians and you learn about their dress (the costumes in the play are gorgeous), dining habits and social life. You get a good look at inns of the era, their chefs and servants. Goldoni’s play has been adapted by Bonnie J. Monte, who has given it much mirthful contemporary language and added some nice touches, like actors talking to the audience and running through the theater, up and down its steep steps, to get on and off the stage.

The strength of the play is its comedy and director Doug West handles that like a master puppeteer. There is a fantastic scene in the play in which the servant, Truffaldino, must serve dinner to his two masters, racing from the kitchen to a courtyard to two different dining rooms. As he does so, two servants race about with him. West has timed this scene down to split seconds and it is a majestic bit of both comedy and theater, all thanks to him.

He gets sterling performances from all of the actors in the play: first and foremost is Reilly as the acrobatic, zany and intrepid Truffaldino. Then there is Miranda Rizzolo as Clarice, Raphael Nash Thompson as Lombardi, Russell Sperberg as Silvio, Izzie Steele as Beatrice and Tug Rice as Florindo. They are joined by a fine ensemble cast.