A New Macbeth Stumbles to the Top 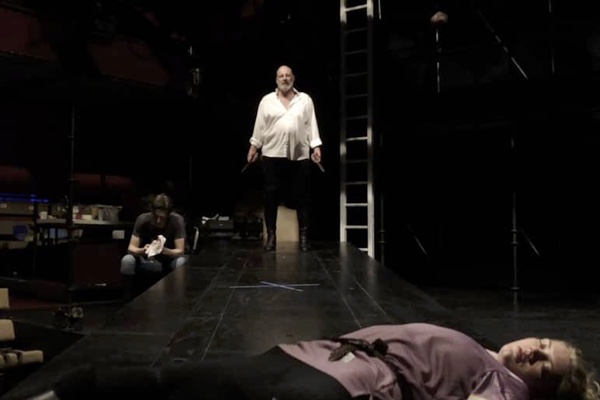 “Something wicked this way comes” is one of the many great lines that William Shakespeare wrote in his staggeringly bold play Macbeth, which just opened at Shakespeare & Co. in Lenox, Massachusetts. It should be re-written as “something very confusing this way comes” because this new, pared down and twisted version directed by Melia Bensussen has audiences shaking their heads.

In a program note she wrote about the play, Ms. Bensussen said she sees Macbeth as a ghost in an Edgar Allan Poe story or Captain Ahab in Moby Dick. Huh?

The greatness of Macbeth is that it is a play of double ambition, Macbeth’s for the throne of Scotland and his wife’s to be Queen. She pushes him and insults him and demeans him into murdering King Duncan so that she can rule the country through her husband, whom she controls.

In this tightened up and changed version of the play, with just nine cast members, much is left out. The fabled three witches who start the play, telling Macbeth he is destined to be King, are gone and replaced by just one, who wanders over the stage throughout the play like she is shopping in a supermarket, speaking in a really weird echo-type voice that sounds like part of a science fiction movie. The great scenes in which Lady Macbeth challenges her husband to murder the King are soft-pedaled. King Duncan was a good King who promoted Macbeth after a great victory in a war and gave him lands and money; there was no reason for Macbeth to betray him and slay him. That is dropped from the new story and the true heinousness of Macbeth’s actions are softened because of that.

The beauty of Macbeth is that it is a multi-layered play about people and spouses but, at the same time, a terrific murder story. That is played down in this production. Here, Macbeth slays the King and that’s that. Lieutenant Columbo could solve this one before the first commercial.

Jonathan Crow is a sturdy, friendly, gregarious Macbeth who, all of a sudden, decides he wants to be King. He is not content just to be another nobleman, as he should be. He has to have it all, no matter how many people have to be murdered for him to reach his goal.

The Lady Macbeth in the play, one of the great figures on stage history, portrayed by Tod Randolph, is not only not the traditional malevolent, power-mad Lady Macbeth of old, but an always smiling, happy woman, waving to everybody, who looks and acts more like June Cleaver from the old Leave It to Beaver television series. She is not plotting treason and murder, but Tuesday’s Tupperware party.

Director Bensussen does get fine performances from just about everybody in the play. Thomas Brazzle is a tough and hardened Macduff, determined to dethrone Macbeth. Nigel Gore is an elegant King Duncan. Deaon Griffin-Pressley is an angry Malcom. Zoe Latz is the sleepwalking la-de-da witch Hecate. Ella Loudon is a solid Banquo, Macbeth’s friend. Mark Zeisler is a good Ross and Gregory Boover does well as Young Duff and others.

There are other problems in the play. I had a hard time understanding some of the actors. Macbeth often spoke in low tones and they were difficult to pick up. There is an awful lot of noise in the play – people yelling and pounding wooden staffs. The unique set, with ladders that go nowhere, is difficult to figure out. The centerpiece of it is a long runway about four feet off the ground that serves as a dining room table, castle courtyard and throne room. Since it was a runway, I kept expecting a Paris fashion show to start and models to show off the latest in 16th-century Scottish gowns.

The play does get better in the second half, when the always experimenting Ms. Bensussen drops her oddball interpretations and sticks to the old script; her staging here is much better. Ambition is one theme of the play but the other, and just as strong, promoted to the second act, is the idea that people need to be very careful about what they wish for. Macbeth does not get the dream world he imagined when he murders the King. Ridden with guilt, now he can’t sleep. Everything and everybody reminds him of the slain Duncan. Macbeth flies into temper tantrums. He can’t trust anybody. Lady Macbeth can’t wash the blood off her hands (“out, out, damned spot”) and her husband, whom she made King, now ignores her. This theme is played out wonderfully in act two. Shakespeare wanted us all to remember that idea in our own lives – beware of your ambition. The play’s finale, when people question the new King’s legitimacy, is just perfect and the fighting is memorable.

The rest of the play is troubled, though, and disappointing. It’s what you get when you see Macbeth as Captain Ahab.