A Play About Senior Citizens Coming to Terms with Their Pasts 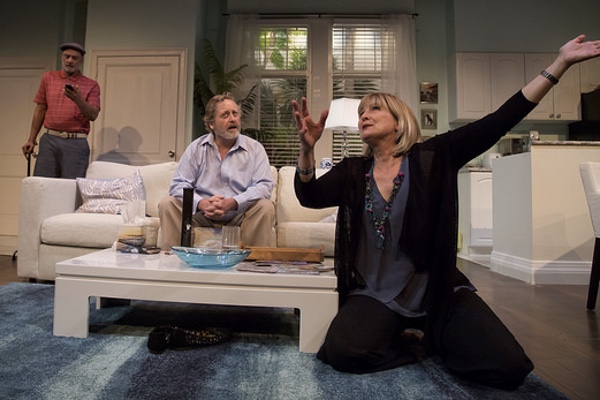 It is early in the morning in a Florida retirement community and a naked Abigail, 58, is wrapped in a sheet, desperately looking for her clothes after spending the night with a man whom she met at his wife’s funeral. Ugh. Awful. Well, there are circumstances to the story. The late wife was cheating on the husband, Angus, and had been for quite a while. He wasn’t enamored by Abigail as much as he was angry at his wife and took out some revenge by sleeping with Abigail.

All of this tumbles out pretty quickly in Morning After Grace, a hilariously funny play about seniors searching for their past and shuddering when they discover their true history back a few generations.

Good Morning After Grace, by Carey Crim, which has been running at the Elayne Bernstein Theater at Shakespeare & Company, in Lenox, Massachusetts, is, frankly, one of the funniest and most charming plays I have seen in years. The humor in it is not only striking, but very original. It has to be. What’s funny about a guy with another woman on the day of his wife’s burial?

Abigail and Angus smoke marijuana, drink, make brownies and do all the things many new lovers do, just as they did when they first dated people in the 1960s. A friend, Ollie, a retired Detroit Tigers baseball player who is limping because he had too many beers and fell out of a golf cart, arrives to tell Angus that Abigail gets paid for being with men and he, Angus, thinks she’s a hooker. No, she’s a grief counselor. She tries to help Angus, but he is stubborn and still madder than hell at his cheating wife.

Playwright Crim has a field day with mature American humor. There are a lot of jokes by playwright Crim about the trio, and about death, but in the second act the humor slows down and the plays gets pretty serious in a rather heart-warming story. She gets much help in that from the play’s director, Reggie Life, who helps her make that transition with much style.

There are a few slants the hook-up tale. Abigail, you see, was divorced by her husband three years ago when he ran off with a younger woman. She’s been on the electronic dating circuit (very funny stories). Angus, 70, is a human-rights lawyer. Ollie is gay and fighting with his boyfriend, and, at the same time, his dad, 92, who does not know his sexual persuasion.

Morning After Grace is a story about how two seniors fall for each other, despite their problems, and help a gay man to confront his fear of his father and woes with his lover. They all have troubles, lots of them, and aid each other in the battle to overcome their problems. They are the product of fifty some years of adulthood history. There are touches pf both humor and pathos that anyone over 50 can understand right away. Abigail, as an example, constantly looks at herself in the mirror and cringes because she wants to see herself at 38, not 58. Angus laments that when he goes to open a door for a young woman she, looking him over, then holds it open for him. The play is funny, really funny.

What immediately struck me about the play, that covers 50 some years of personal histories, is that it is one of just a few plays, or movies, about the problems of senior citizens, especially gay men and women. Abigail tells funny but still heart-wrenching stories about how she had to hire a dating coach to help her get back into the social whirl and how men are a minority on the dating scene, making relationships more difficult for ladies, and women face problems all day long. Ollie, the gay pitcher, laments that throughout his baseball career he could not tell anybody that he was gay because of the way Americans see their sports stars. Angus is 70, overweight, and limps. He gets no help from anybody. Today, senior citizens are the largest group of Americans and yet few playwrights or screenwriters, write works about them. It is not right that the largest group of Americans has become invisible in a very visible nation.

It is vitally important in this country that we see plays and movies about 25-year-olds, but it is just as important that we see works about senior citizens, women, and gays, too. We are a nation of all sorts of people and need stories about all of us.

Those stories can be told in unique and clever ways, just as Crim tells her tale in Morning After Grace. It is humorous and frivolous at times, but also deep and penetrating. She captures all the fears people have when they grow old, all the funerals they have to attend and the arguments they have with their now grown kids, as discussed in thought provoking dialogue by the seniors in the play.

Director Life gets fine performances from the trio of stellar actors in the cast. The talented Steve Barkhimer is an everyman’s 70-year-old. He is overweight, limps, scratches his eyes to see better and snores. Throughout the play, he is constantly trying to” move on” after his wife’s passing but finds that difficult. Corinna May is just adorable as Abigail, who has been through so much since her husband left her. She is trying to be a fiercely independent woman, but still needs a man in her life. Kevin Vavasseur is solid as Ollie, who limps around stage and tries to sort his life out with the help of others.

As Crim so brilliantly suggests in the play, the 60s, 70s and 80s decades do not have to be the twilight years of life, but its triumphant finale.

PRODUCTION: The play is produced by Shakespeare & Company. Scenic Design: Patrick Brennan, Costumes: Stella Schwartz, Lighting: James W. Bilnoski, Sound: Iain Fisher. The play is directed by Reggie Life. It has ended its run in Massachusetts but will surely be staged elsewhere in the country soon.