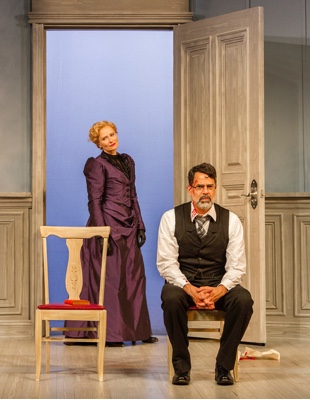 At the conclusion of Henrik Ibsen’s classic 1879 play A Doll’s House, heroine Nora Helmer turns her back on her husband and children and leaves home, penniless and jobless, slamming the door behind her.

What did happen to Nora after her abrupt and defiant departure? In his new play A Doll’s House, Part Two, playwright Lucas Hnath tells you. It is not a pretty story, either.

The play, a sizzling, thunderous triumph, which opened last night at the Barrington Stage Company, 30 Union Street, in Pittsfield, Massachusetts, begins with Nora knocking on the door of her Norwegian home 15 years later. Servant Anne Marie, who knew she was coming, throws it wide open and embraces the woman, now in her mid-forties. Nora is there, she tells her old friend, to get an official divorce from her husband so that she can defend herself in a lawsuit.

Anne Marie fills her in on what happened in her old home-sweet-home after she departed long ago and never spoke to her husband or three children again. Basically, Anne Marie tells her, they all pretended that she was dead. How, then, can she rise from the dead to win a divorce?

Not to worry, the servant says. She sends Nora to her daughter, all grown up, who does not even remember what her mom looked like. The daughter, smart as a whip and a conniving schemer if there ever was one, has concocted a clever plan to smooth over all the ruffles in family history. She tells Nora to stay dead. The daughter, Emmy, explains to her that she knows people and can slip a forged death certificate into the town’s records to prove that Nora went straight from slamming the door to the Pearly Gates.

Nora is flabbergasted. That is not at all what she wanted. Nora wanted to resume her life, not be shut out of it. She wanted to reclaim her vitality as woman and to assert her fame with her numerous women’s rights books (all written under a pseudonym).

She tells the story of her missing years to Emmy, and later to her husband, Torvald. The tale, a sad and sweeping melodrama, created by playwright Hnath, is a tear jerker. Nora lived alone for years, slept in a cabin in the woods and for several years simply did not speak. She engaged in several romances that turned out to be disasters. Life was misery and not the feminist triumph she had hoped it would be. She did have her books, but nobody knew she wrote them. No parades for her.

What will her daughter and husband do now? Do they stonewall and make her play dead or embrace not-so-good-old mom from days gone by, give her the divorce and new life she desires?

A Doll’s House, Part Two is pretty flat during its first half, but it comes alive, like someone stepping on a live wire, when Nora meets her daughter after fifteen years. All four actors stay in overdrive and on fire for the rest of the play, leaving the audience gasping at the end.

Nora’s women’s rights books did not change the world that much, despite her dreams. Anne Marie and Emmy tell her that they might have done more harm than good. How many happy marriages did she ruin with her exuberant don’t-stand-by-your man advice? She also wrecked the lives of her husband and kids.

It was a triumphant door-slam years ago, cheered by feminists worldwide, but, in fact, did she do the wrong thing by stomping out?

The playwright does not come to any conclusions, just suggesting that on marital issues the world is not black and white but a deep and shady grey. Who is really right and who is really wrong? Or is there a middle ground?

Do these two need a new Norwegian marriage manual or a chat with Dr. Phil?

One thing that haunts the play, and I loved this, is the continued playing of the 1963 hit song by Lesley Gore, “You Don’t Own Me” in which the female singer tells her man to stop trying to smother her.

Director Joe Calarco does a fine job making this an exciting production, full of confrontation, even though the play has just four characters and all of the action takes place in one room. He gets superb performances from his quartet of gifted actors. Laila Robins is a superb, roaring. soaring Nora Helmer, so tightly wound up and worried that at one point she nearly twists herself into the ground, lying limp on the floor, exhausted. Husband Torvald Helmer, portrayed wonderfully by Christopher Innvar, is a battered and meek partner at the start of the play, but by the end he is a fierce marital warrior, too. Ashley Bufkin is deliciously devious as daughter Emmy and Mary Stout is an in-charge and effective servant.

You wish that there was more Norwegian history in this play, set in 1894, but, then again, perhaps the success of the play is that the story could take place anywhere, and in any era. It would be perfect here in the United States today. These kind of husband/wife arguments rattle houses and apartments from New York to Seattle every day.

This is real grist for the #MeToo generation of women now, as it was back in the early 1970s, the start of the contemporary women’s movement. This majestic and forceful play will make people talk, both men and women, and, again, redefine marriage.