Yet Another School Sex Scandal: Review of the Newest Production of "The Children's Hour" 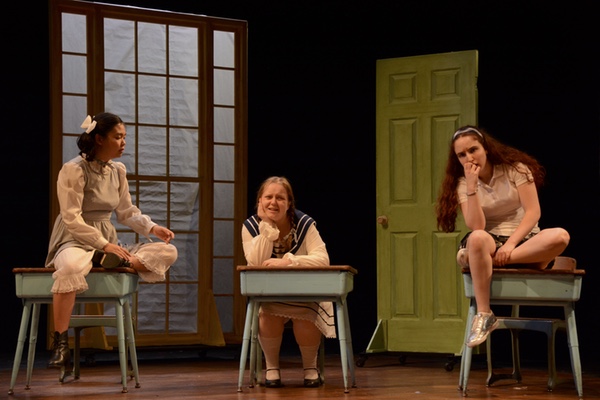 In Lillian Hellman’s play The Children’s Hour, two female teachers in an exclusive girls’ boarding school in Massachusetts are accused of having a lesbian affair by a student. A second student (under duress) backs up the contention of the first. There is an immediate scandal, parents are outraged, the teachers are fired and the school’s reputation is badly damaged. No, this did not happen last Thursday, as you may have suspected, but in 1934, when Hellman’s play opened as a smash hit on Broadway. It was based loosely based on a similar sex scandal in Edinburgh, Scotland in 1810.

The more things change, the more they remain the same.

A new production of The Children’s Hour opened last weekend at the Princeton Summer Theater, In Princeton, N.J. It is a pretty good play despite a tedious, snail paced first act, a screeching, annoying actress and a good half hour of dreary plot that could be deleted.

In The Children’s Hour, Mary, a snot nosed, rambunctious, ditzy teenaged brat who is always making up stories, gets angry at two of her teachers, Karen Wright and Martha Dobie. They pick on her, she tells friends, and, in general, make her life at the school, in Lancet, Massachusetts, miserable. Angry, she makes up a story that she heard they did “unnatural” sexual things with each other and that she “saw” them in bed. She feeds this false tale to her conservative grandmother, with whom she used to live, in order leave the school with granny’s OK. Grandma then calls parents at the school and gives the story to them. Chaos follows.

The play is ripped right out of the morning headlines. We are a nation besieged with sex scandals in schools and every day some teacher, somewhere, is fired or arrested for sexually abusing someone. It’s not new. It was already old in 1934.

The play is about Americans’ intolerance of homosexuals, but also about a girl who lies about sex to achieve her own goal. Are we responsible for what we say? Is one’s own goal more important than the lives of others? Is it ever all right to lie?

It is a play about gossip, too, and how too many people believe it (remember all those people executed in the Salem, Massachusetts, witch trials in seventeenth century because pf the malicious, lying gossip of some of the town’s children?)

The play is a roller coaster of emotion and plot. The teachers are accused. They sue the accusers. They get no support. Friends abandon them. Everybody hates them. They are ruined. And then there is the last, sizzling act of the play.

The Children’s Hour, by one of America’s great playwrights, still solid after all these years, is nicely directed by Maeli Goren, has fine sets by Jeffrey Van Velsor and a good cast.

It has its problems, though. First, the first act is ruined by the overacting of F. Harper Nora Jeremijenko-Conley as Mary. She jumps in the air, dives into the sofa, rolls over on the floor and talks with a machine gun fire speed. Your head spins just listening to her talk and she speaks so quickly that you can hardly hear what she is saying. Granted, the role is that of a precocious teen but Ms. Conley really overdoes it. In the second and third acts, with less of her on stage, the plot unfolds in an orderly manner.

Second, for some reason, director Goren inserts songs into the drama that have absolutely nothing to do with the story.

There is also a third female teacher dressed in a suit as a man for no discernible reason who seems out of place, as well as a guy dressed as a girl student with no explanation.

It is set in 1934 and yet there is no history in it, as promised by the theater in its literature. Director Goren said in her play notes that “during the development of the play, Hitler came to power in Germany, the KKK continued its resurgence throughout the United States and the tides of nationalism, racism, xenophobia ad homophobia rose steadily worldwide.” None of that is in the play. The era in which the pay was produced was certainly full of history. Franklin Roosevelt had just been elected President, the Depression was eroding American life, sound movies debuted, the Empire State building opened and the American labor force was engaged in numerous strikes. Yet Hellman had none of all that in her play and the director did not add any historical references, either.

The play works and showcases intolerance in the 1930s, but it has its bumps along the way.