Political Humor: From Nixon to Trump 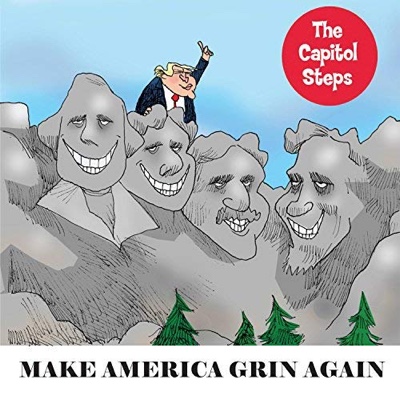 For 35 years, the Capitol Steps comedy troupe has been making fun of America’s public officials, bringing howls of laughter from coast to coast, and now they are at it again. They are having a field day, too, because we have a President whom the late-night comics enjoy using for target practice. The cast members of Capitol Steps have sliced and diced everyone in recent history from Richard Nixon to Bernie Sanders and they are blasting away once more.

I caught the 2018 show, “Make America Grin Again” at the Cranwell Resort, in Lenox, Massachusetts, and enjoyed it. The members of the Steps troupe specialize in writing and singing new lyrics to familiar tunes. Now they’ve got “I’m So Indicted” substituting for “I’m So Excited,” “Putin on a Blitz” for “Puttin’ On the Ritz” and “How Do You Solve a Problem like Korea” for “How Do You Solve a Problem Like Maria.” They poke fun at the Supreme Court, Sarah Huckabee Sanders, Mike Pence, Bernie Sanders (a lot) and Arizona border guards (a very funny bit). The main target, of course, is President Trump. The songs are witty and, in line after line, they jab the target of the song, whether it is Trump or Hillary Clinton.

The comedy group has succeeded for years because America has a sensitive funny bone, a natural dislike of politicians and its people enjoy a good laugh. The latest show has its ups and downs, like any political revue. The bits involving Trump were pretty good, especially a song on being “a small man” (yes, the Marco Rubio debate jibe) and the actor who played him caught his personality (oh, and the hair!). The troupe had some funny songs about Trump and they opened the show, so that put you in a good frame of mind. There was nice bit that paired off Sarah Sanders and Bernie Sanders (wearing a very funny white whig) against each other.

This Steps show has some missteps, though. I saw a performance two days after the Trump-Putin Summit in Helsinki and the comics had one or two jokes and that was it. The six o’clock television news reporters had more humor on the summit. The comics need a more comprehensive grasp of history. They stretch back to the Nixon years with their jokes and funny stories (a reference to O.J. Simpson, too) and should have gone back further still. The audience for the show that I saw was older and would have enjoyed more 1960s humor. They did have some jabs at Bill Clinton, a comic’s favorite target, though.

The Capitol Steps team had some Stormy Daniels lines but not many, one bad song about Melania Trump (nothing about all those hilarious “Free Melania” posters). There was a brief mention of the wall between the U.S. and Mexico and the immigration troubles.

One actor, dressed as a 1940s style detective with his raincoat, does some stand up humor that is not terribly funny. There is a long, long song in which peoples’ names are mangled along with other things and it gets really tedious and quickly.

There are obvious comedic targets which are missed: What about the FBI? The intelligence organizations, (they could do a LOT more on Kim Jong-un), the Democrats, the media?

There is a bit on Oprah Winfrey or Homer Simpson for President that fell flat, as did references to Rachel Maddow. Overall, though, this is a very pleasant ninety minutes in the theater with a lot of broad-based humor and hundreds of chuckles.

The overboard humor on Trump works, and that is a feather in the troupe’s hat because it is hard for any actor to be as funny as the real President Trump.

The Capitol Steps revue at the Cranwell Resort runs each night except Tuesdays through August 31.