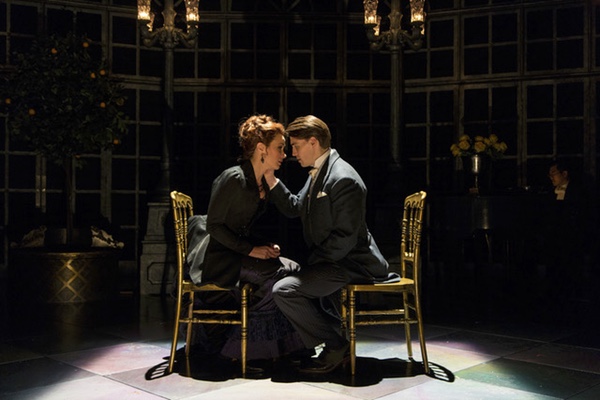 It is the 1870s and wealthy May Welland, of THE Wellands of New York and Newport, wants to marry lawyer Newland Archer, of THE Archers. They are two of the young glamour kids in the New York’s snooty Gilded Age high society. The only problem is that dear Newland, who is long on good looks and short on intelligence, has fallen in love with another woman, Countess Ellen Olenska, a stunning redhead who has swept him off his feet and consumed what little brainpower he has. The trio’s sometimes engaging and sometimes tawdry story is the heart of The Age of Innocence, based on Edith Wharton’s scrumptious book, that just opened at the McCarter Theater, in Princeton.

The love triangle story is as old as ancient Rome and yet, under the wondrous literary powers of novelist Wharton, as fresh as a new tale on Netflix.

The novel, that won the Pulitzer Prize for fiction in 1921, has been turned into a stage play by Douglas McGrath. The play starts out very slowly, I mean Tortoise and the Hare slowly, really tediously slowly, and you wonder when it will pick up speed, if ever. That does not happen until about the mid-point. Until then, you just watch pathetically wealthy and stupid men and women bounce around old New York in search of something to occupy their time. When it gets interesting, though, it gets veryinteresting and, in the end, turns into a well told tale that keeps you literally oohing and aahing over the exploits of the main characters.

You sit there and just cannot believe what a fool Newland is. He has in May a very attractive, filthy rich bride who is charming, witty and has as her lifelong goal making her husband happy.

So what is with this guy?

Newland is just nuts over the redhead countess, who travels around Europe doing nothing rather well. He keeps telling her that he loves her and that his love is not a fling or a one night stand, but the story of a lifetime with violins and roses (the sea is washing in on the beach, too). He just can’t shut up and she gives him, well, nothing in return.

Does this all sound familiar? Well, we all know these people.

Director Doug Hughes works hard with the stop and go script but does cobble different sections of the Wharton book together into a play. The actors save the play, which might have been a disaster without such a solid cast. Hughes gets really good performances from Andrew Veenstra as Gilded Age hunk Archer and Helen Cespedes as low-key May and the voluptuous Sierra Boggess as Countess Ellen. Holding the story together is the character of Newland as a very old man, looking back on his life and telling history (often in very funny way). He is played with great majesty and a nice snicker by veteran actor Boyd Gaines. Other fine performances are turned in by Darrie Lawrence as Mrs. Mingott, Deirdre Madigan as May’s mother, and Josh Salt as Newland’s son Dallas Archer. The rest of the ensemble cast does fine work.

In The Age of Innocence, post-Civil war New York and the Gilded Age, of course, were not innocent at all. When is an age of innocent really innocent? The Garden of Eden? Cain killed Abel.

The play does a nice job of capturing the history of Gilded Age New York. Wharton is right on target in her tales of the rich and their “woes.” She chronicles the lives of the rich very nicely and skewers everybody with great panache and a sharp literary knife. You learn all about the vacations of the wealthy in Newport, their trains and yachts and mansions. There are the balls (held one night a year in a ballroom whose furniture is covered with sheets the other 364), the expensive gowns and well-made suits, trips back and forth to Paris and London, paintings and elegant carriages. It was a world within America and existed in Chicago and San Francisco, too, and all the places where the rich float along in a sea of money.

The play starts with old Archer, twinkle in his eye, telling the audience that 1870s New Yorkers lived in a city in which they paid attention to no one in any other city and in which the sun does not rise in the East, but on the East Side.

He sets up his own story and then leaves the stage as the tale of Newland and May starts. The old Archer rambles back into the play from time to time to help the audience understand what is going on and then stars in the finale scene.

There is a point in the last third of the play when Newland can’t decide what to do with his two women and you are so caught up in the drama that you just can’t wait to see what his decision will be. There is a point, too, a bit earlier, when you suddenly realize that silly little, dim-witted dottering housewife May knew what was going on with just about everybody from the start. She turns out to be one shrewd woman. May was nobody’s fool.

The McCarter play program includes a fine biography of Wharton, a rather engaging writer who wrote numerous best-selling novels, great short stories and several non-fiction books. She also served as a war correspondent in Europe during World War I. She built The Mount, in Lenox, Massachusetts (I’ve visited it) and lived there for ten years. After a failed marriage, she moved to France and became involved in war work. She used her literary fame and money to establish workrooms for unemployed seamstresses, convalescent homes for tuberculosis sufferers, hostels for refuges and schools for children fleeing war-torn Belgium.

The Age of Innocence was her greatest work and this stage version, despite its slow start, is a good adaptation of it.

You watch the play take place on the lush McCarter set and listen to the gorgeously dressed characters gabble about their fortunes and you are reminded of the famous Ernest Hemingway line when he was asked about the difference between the rich and the rest of us.

Something to think about.