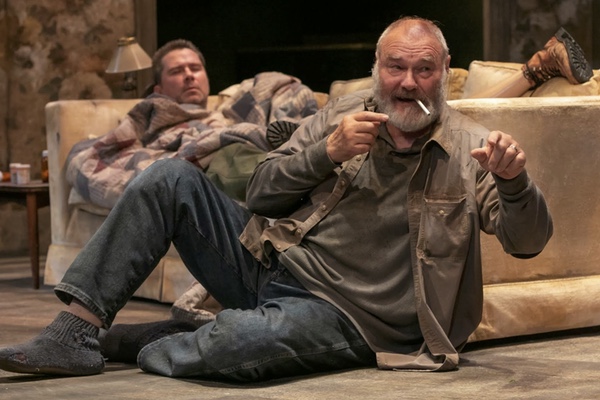 The beaten up old Illinois farmhouse in Sam Shepard’s 1978 play Buried Child is a wood frame, rain drenched America and the house, and the country, are falling apart. Shepard’s play about the 1970s is a masterpiece and is getting a brilliant revival at the Shakespeare Theater of New Jersey, in Madison, N.J. where is just opened.

Buried Child is about a completely dysfunctional family trying to keep themselves, and their battered dreams, alive as everything collapses around them. Dodge, the grandpa of the brood, is a fallen down drunk who sleeps all day, drinks cheap whiskey and complains bitterly about everything and everybody in his life. His wife Halie despises him so much that she frequently leaves home and goes off for days by herself. His son Tilden, who has returned from a sojourn in New Mexico, is an odd man who looks and acts as if he had just seen an Atomic bomb explode in his front yard. He aimlessly wanders about the house and yard, uncertain of where he is and where he us going. Dodge’s other son, Bradley, a loud, annoying man in his thirties, like Tilden, stumbles around on one good leg and one wooden leg that his cruel father often steals when he is sleeping, throws into the backyard and makes Bradley retrieve it.

The family is wounded, just as the country was in the 1970s. Family farms, like that in the play, were being suffocated by big industrial farms in the Midwest. In those years, there were few facilities to help mentally challenged men like Tilden, little emotional or marriage help for tired and frustrated wives like Halie. The Vietnam War had just ended. There were marches and protests in the streets for Civil Rights. The student rights riots of the ‘60s had left a bad taste in the mouths of many Americans. The crime rate was sky-high. Many were unemployed. The nation was as troubled as the people struggling to get through the day in the old farmhouse.

Suddenly, out of nowhere, Dodge’s tall, thin, hip grandson Vince arrives after a six year absence with his spunky, headstrong girlfriend Shelly. Halie has left on another junket to get away from her family and the men in the house do not recognize their grandson. He is their grandson, for sure, but why did they forget him? Why do they not recognize a lot of things?

You can see that there is something very wrong with this family. All of them are disconnected from the world and their hearts and souls are all torn. What happened years ago? How did the determined old grandpa drift off into so many depression spells? Why is the grandma so desperate that she gropes a priest? How on earth did Tilden, a much heralded college halfback, never make it to the NFL? What terrible thing happened at that farm, to those people?

Buried Child, which won the Pulitzer Prize for Shepard, who recently died, tells a lot of history and nicely explores the decline of the nation. You feel badly for the people in the play and their rustic old farm, that has to be going of business, just as the country was going out of business. Remember that famous ‘70s financial crisis headline (Ford to City – Drop Dead)?

Can the family in the play survive? Can the nation? There are signs that they can. Tilden goes out to the barren yard and always returns with armfuls of vegetables that all swore were not there. The torrential rains (cleansing of the soul?) do end. The sun does come out again. The crop drought ends. At the end of the play, looking out the window at America, the grandma, in a breathless voice, calls the country “paradise.”

Director Paul Mullins pulls every nuance out of the play in his touching, poignant staging of the drama. He gets just terrific performances from Sherman Howard as Dodge, Carol Halstead as Halie, Anthony Marble as Tilden, Roger Clark as Bradley, Paul Cooper as Vince, Andrea Morales a Shelly and Michael Dale as a priest, Father Lewis, who, in the middle of a family battle, tells all “I just came in for tea…”

There is an eerie similarity to the nationwide problems of the 1970s and today. The country, Shepard said, was politically divided then and it is now. Farmers struggled then and they struggle now. Children and grandchildren disappeared then as they do now. Mental health experts failed then and they fail today. Marriages were frayed then and they are today.

See Buried Child. It is a gem.