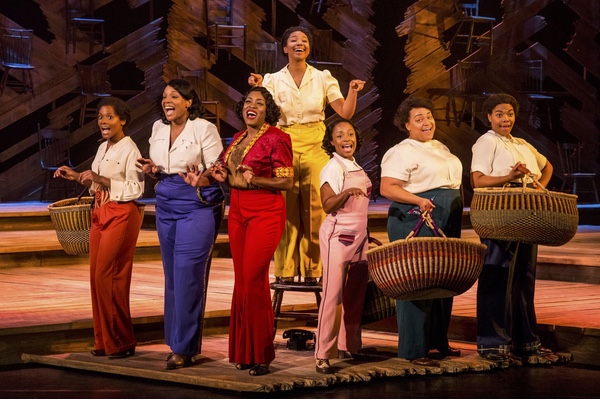 Celie is a lovable but slow witted, subservient African-American girl in oppressively hot Georgie in the early years of the twentieth century. When she reaches maturity, she is unceremoniously shoved off to “Mister,” a thoroughly despicable, blustery character who totes a bullwhip around with him. Celie is his lover, cook, house keeper and child-bearer. She hates Mister and hates her life, which is not many steps up from slavery. But, as he laughingly tells her of the role of women in the 1915 era, she’s trapped. Black women were trapped by culture and history. White women were trapped in a different way, but they were trapped, too.

Celie struggles along, getting help from her sister Nettie, as time goes by, having two children and bowing to Mister’s every wish. Then, like a rose, she blossoms and stands up to Mister in The Color Purple a revival of the hit 2015 Broadway musical that just opened at the Paper Mill Playhouse, in Millburn, N.J. It is a romping, stomping, God fearing hallelujah-everybody play whose drama rips your heart open and whose music tears the roof off of the playhouse.

The Color Purple, written by Marsha Norman and based on the successful 1985 movie and Alice Walker’s best-selling novel, is the story of the South but it is truly the story of admirable, tragic victim Celie. She puts up with her rough, abusive and ugly husband until she meets Shug Avery, a glamour girl who hops and bops around the South and the world. Celie falls in love with Shug and Shug pulls her out of the depths of her life until one day she stands on a chair, angrily points her finger at her partner “Mister” and calls him “a low down, dirty dog.”

. The rest of the play is a really uplifting look at Celie that shows how she blooms not just physically, but emotionally, too, and in 1949 winds up a confident woman who makes a lot of money as a clothing designer. At one point, she triumphantly climbs on to a chair and shouts “look who’s wearing the pants now.”

It is a fascinating look at the roles of women in that era. Their lives make you shake sadly as you watch the story unfold. Black women in that era had no rights at all, except the right to make breakfast, sweep the floor, wash the clothes, raise the kids and do the laundry. Their lot in life was disgraceful. It get better, though, as the nation changed.

The show’s thumping music and lyrics, by Brenda Russell, Allee Willis and Stephen Bray are good. There is no big, memorable single song, but the songs help to tell the story and, more importantly, build the emotional happiness, or wrath, of the characters in the tale. The set is pretty bare and backed up by an enormous wall with thirty some chairs suspended from it. I have no idea what that is supposed to represent other than a wall with thirty some chairs suspended from it.

The star of the musical is Celie, played brilliantly by the highly talented Adrianna Hicks. She is effervescent and, as the play progresses becomes far more than just the lovely purple flower in the field. She becomes a large, strong oak. Hicks is wonderful. You get depressed with her, you cry with her and, in the end, you stand up and cheer loudly for her. Director John Doyle does a super job of making Celie come to life amid a half dozen other memorable characters in the play. They are all finely cast and include N’jameh Camara as sister Nettie, Carrie Compere as Celie’s friend Sofia, Jay Donnell as Harpo, Gavin Gregory as Mister and Carla R. Stewart as glamour girl Shug Avery.

By understanding these downtrodden black women of the 1920s and ‘30s, belting out gospel sings in church and embracing their children to save their lives, we can see the dark side of the American dream, for whites and blacks, too. In this play America did get better, for Celie, Nettie and their families (even the belligerent “Mister” turned out all right in the end), but it certainly took a lot more time than it should have.

The Color Purple is not only a terrific show, it is a bold historical look at the oppression of women in America and how, in Georgia at least, and in this story, they triumphed.