Culture Watch
tags: theater review, Midnight at the Never Get 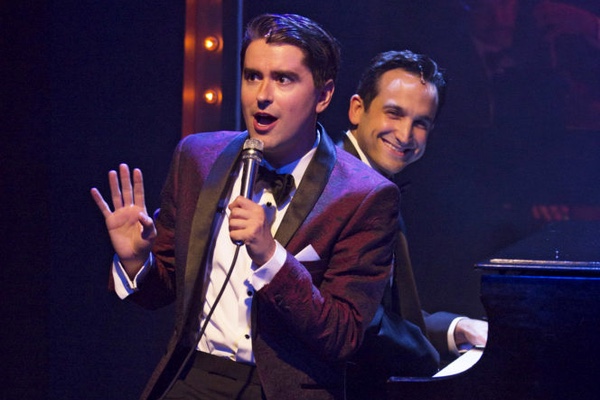 In the 1960s, gay bars in New York City were illegal. They stayed open because of bold owners, large crowds of patrons and police who, bribed, tipped off owners before a raid. It was a rough, problematic, turbulent world for the bars and their gay patrons.

That’s when young singer Trevor Copeland arrived in New York and stumbled into a relationship with pianist and composer Arthur. They became romantic partners and started a musical collaboration. Arthur wrote songs for Trevor and he sang them for audiences. This effort got them jobs as performers at the Never Get, a gay bar in New York’s Greenwich Village. They soon developed a two man show, “Midnight at the Never Get” that became popular.

Midnight at the Never Get, a smartly written, enchanting and rich musical with deeply drawn and highly likable characters, that opened last night at the York Theater at St. Peter’s Church at 54th Street and Lexington Avenue in New York, with book, music and lyrics by Mark Sonnenblick is their story. It is a tale told on several levels and each blends into the other. The first story is the love affair between the two men, white hot at first. The second is the story of their club act and the bar. The third is the story of the police crackdown on illegal gay bars in the 1960s, culminating in the infamous Stonewall raid of June 28, 1969, that led to riots, the start of the gay rights movement and a new day for the gay community.

Midnight at the Never Get has a lot of drama in it, especially for anyone who was around in the 1960s and was an eyewitness to the police war on the gay community. The music by Sonnenblick is marvelous and you could pick any famous singer (Sinatra came to my mind) who could have performed the melodious and well-written tunes in the show.

The play, smartly directed by Max Friedman is well-written and at first deceiving. As first, it is what appears to be a dull two man show about guys who met at a bar. It gets deeper and deeper as the story rolls on, though, and very complicated in the end.

Will the two lovers prevail, despite all the hurdles put in their way or, as in many cases, will the musical success of one cause a break up?

There is a lot of history in the play, stories you sort of remember but need to be reminded about. As an example, in the play Arthur wrote a number of songs about a man professing his love for another man. When he had a chance to record them, though, the record company insisted that they be changed to a man loving a woman. Record companies in the 1960s also insisted that lyrics connected to gay life be cut out or, more likely, rewritten slightly to turn the gay love stories into heterosexual romances.

The story of police harassment of gays in bars in the 1960s is told well. The NYPD was obliged to raid gay clubs because they were illegal. Bar owners, tipped off, changed the coloring of lights or clicked lights on and off to warn their gay patrons of a raid. They also stepped men from dancing with each other or displaying any signs of affection.

Historically, most of the gay bars in New York in the 1960s were owned or run by the Mafia. The mob saw the gay clubs as a gold mine because no one complained of conditions there, pretty dismal at times, because it was an oasis from a cruel world. A number of top gangsters ran the clubs and made a nice profit. Until Stonewall, the gangsters knew how to deal with the police, too, and that benefitted gay patrons.

The combination of the police raids on gay bars, organized crime and the fractured relationship between Trevor and Arthur at the end of the play works nicely. You worry not only for the relationship of the two men, but their safety and, in the end, their future.

Director Max Friedman does a superb job of keeping the play running along as an admirable musical and at the same time, a pretty fierce and worrisome drama. He gets marvelous performances from his two stars. Sam Bolen is not only a gifted actor, but a superb singer who not only has a terrific voice but is able to carry off the songs and make them part of the story. His equally gifted partner Arthur (played beautifully by Jeremy Cohen) is the tough guy in the duo, the one who always has to look out for their future. The pair also work together well and you keep hoping that things will work out well for their characters, while at the same time fearing that they will not.

There is a quiet magic to the musical and, as the play rolls on, the audience feels a lot of sympathy for the two male leads, fearful that they will break up and, at the same time, get hurt. There is a touching scene in which Trevor, jailed earlier for his sexual choices, has to calm down a very worried Arthur when the men are held at a police station overnight. Arthur is not as worried for justice for gays as he is having his career ruined by the incarceration.

Time does not run out at midnight, but goes on beautifully, just as the play does.