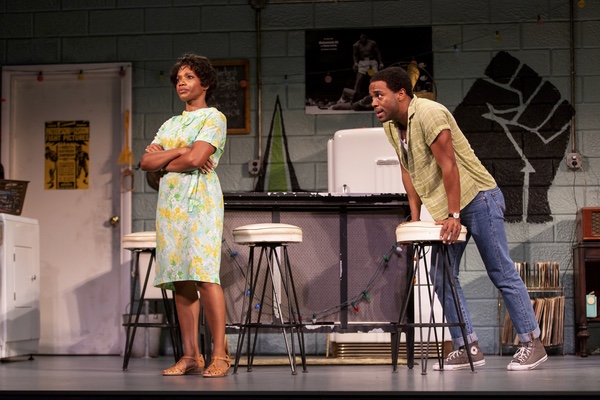 I remember the Detroit race riots in the summer of 1967 clearly. Newark, N.J., near where I live, was torn apart by racial disturbances that summer, too, as were 150 other American cities. Dominique Morisseau’s play Detroit ’67 is the story of a family caught in the middle of the Detroit riots trying to hold itself together as neighborhoods burn, tanks roll down the streets and young people are gunned down by the police, National Guard and U.S. Army. In the five days of rioting in Detroit that July, 43 people were killed and over 1,189 were injured. There were 7,200 arrests and 2,000 buildings were destroyed. 2.509 stores were looted or burned. 388 families were made homeless. Dollar losses amounted to about $80 million. It was one of the worst riots in American history.

It is the perfect backdrop for a riveting play that not only tells a story but sends a loud message, but the message arrives very late on stage at the McCarter Theater, Princeton, N.J., where the play opened last weekend. The first half of the play by Morisseau, a Detroit native, is just dreadful. It is slow moving, full of inane dialogue and centers on the discovery of Caroline, a white woman, beaten up pretty badly, on a neighborhood street prior to the riot. You spend the rest of the play trying to figure out how she wound up in Detroit at all. Why not Allentown, Pennsylvania, that was pretty safe that summer? Worcester, Massachusetts?

Oh, the play is nearly three hours long, and the time goes by s-l-o-w-l-y…

But then, in act two, the play finds its focus, picks up steam and just scalds the audience with its intense, white heat story. If you can last that long, Detroit ‘67 is the play for you.

The story in the play is a simple one. Chellie is a reasonably conservative young black woman pretty happy with her life in Detroit. Her brother Lank is not. He and his buddy Sylvester want to start a new business, a bar, to make their fortune. Chelli scoffs at them.

That’s when Lank arrives with Caroline, the beat up white woman whose background is top secret. She wanders about the stage, walking in circles mostly, as act one stumbles to its end, thankfully.

There is an African American guy (Lank) and white liberal girl, Caroline, subplot, the Chelle is too happy subplot and the Sylester loves Chellie subplot. They all go nowhere in act one.

The action unfolds in act two, when the riot starts. At first, thing move slowly. Chellie’s friend Bunny, a delightful young woman full of enthusiasm, keeps Chellie up to date on the riot. Lank then says he has to go to this new bar they bought to protect it. From here to the finish, Detroit ’67 is pretty powerful.

It is a play whose sound effects help to carry it. The whole story takes place in the house owned by Chellie and Lank, but the riot unfolds around it. You hear the riot in the wondrous sounds effects (sound director Karin Graybash). You hear the chaos, gunfire, explosions and the fearsome rumble of the tanks.

Everything that could be good in a drama happens in act two and everything bad that could take place occurs in act one. The play is full of Motown music, but I cannot figure out why. The Temptations could not stop a tank.

Director Jade King Carroll deserves some of the blame for act one. She should have seen how slowly it moved and cut a good fifteen minutes, maybe 20, from it to speed things up. Her work in act two is much better. The director gets fine performances from all of the actors. Myxolydia Tyler is a burst of energy as Chelli and Nyahale Allie is equally good as friend Bunny. Ginna LaVine is OK as Caroline, but needs some more pep. The men in the show, Johnny Ramey as Lank and Will Cobbs as Sylvester are superb.

The play’s ending is tragic, as you would expect.

Somewhere, either as finale dialogue on stage or a note in the play program, the sad aftermath of the Detroit riot should have been told. Most of the people in Detroit did not prevail as it is suggested in the drama. Today, Detroit is the poorest large city in America ($28,000 average income vs. San Francisco’s average $83,000). It has a 36% poverty rate, highest in the nation. Since 1950, Detroit’s population has dropped by nearly 60% due to the flight of white residents. Unemployment today is about 8.4%, or more than twice the national average. Detroit has one of the highest crime rates in America; its murder rate is more than ten times that of New York. The city has 70,000 abandoned buildings and 90,000 vacant lots. Thousands of jobs have been lost in the auto industry as plants moved out of the city over the years. Revenue has been tentative. As an example, more than half of Detroit’s property owners did not pay taxes on 2012, dramatically hurting the city’s economic flow. The city recently declared bankruptcy (since ended). Detroit is a mess and that should have been noted.

PRODUCTION: The play is produced by the McCarter Theate, in conjunction with the Hartford Stage. Sets: Riccardo Hernandez, Costumes: Dede M. Ayite. Lighting: Nicole Pearce, Sound: Karin Graybash. The play is directed by Jade King Carroll. It runs through October 28.