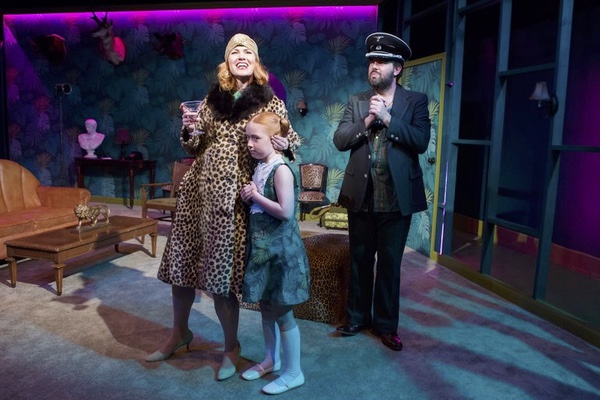 Kurt Vonnegut, who died in 2007, was one of Americas most gifted writers, a marvelously innovative playwright and novelist who gave us the brilliant 1969 novel Slaughterhouse Five and other books and short stories that were wildly original, tragic humor at its very best. One of his stellar works was the 1970s play Happy Birthday, Wanda June. A revival of it opened last weekend at the Duke Theater on W. 42d Street, New York. It is daffy, absurd, eclectic, bawdy and just wonderful.

Happy Birthday, Wanda June is the story of a blustery, egomaniacal national hero, Harold Ryan. In the 1950s, Ryan killed over 200 men in wars and then shot thousands of wild animals on safaris in the Amazon rain forest and Africa. He was the macho man’s macho man, a tough guy with a rifle in his hand, a combination of John Wayne and Ernest Hemingway.

He’s been missing for eight years and declared legally dead. His third wife, Penelope, who still lives in their New York apartment, cannot decide which of two low-key, milquetoast, very non-violent suitors to marry. His son Paul, no he-man like his Dad at all, adores his father and wishes that he could somehow come back to life from deepest Africa. His son and wife think about him all the time since he has mounted heads of big game animals he killed on the walls of the living room and installed doorbells that are the sounds of wild animals and scare the daylights out of everybody. In fact, the play starts – wonderfully so – with the doorbells roaring as the lights slowly flood the stage. You are in the jungle – the Manhattan jungle.

Well, Ryan does come back. He returns from the jungle, where he has lived with none other than Looseleaf Harper, the U.S. Air Force pilot who dropped the Atomic bomb on Nagasaki at the end of World War II. The pair exalt each other endlessly but, if the truth be told, they are really sick of each other after living in trees and fighting off malaria together for eight long years.

They suddenly parade into Penelope’s apartment with bravado. Ryan is dumbfounded that his wife is a dating a vacuum cleaner salesman, Herb Shuttle, and Dr. Norbert Woodly, a hippie doctor who plays the violin and walks around with a tiny medical bag while Ryan stomps about with his enormous rifle, scope and all.

The jungle has both worn down and worn out Ryan, the man’s man. He uses crude language, shocks all with the “N” word, throws people out of his apartment for no reason, is rude to his wife and son and does nothing but talk about himself. The jungle has turned him into a semi-Gorilla. He makes Gorilla sounds, hunches over like one and walks like one. He did not conquer the jungle; the jungle conquered him.

The play is set in the 1960s and guns in the U.S. are nowhere near the big issue they are today so this nearly 50-year-old play seems cut right out of the yesterday’s headlines (ironically, there is a lot of the #MeToo movement in the tough, gritty character of Penelope, who refuses Ryan’s sexual advances).

America is different in the ‘60s than the ‘50s but Ryan, in the jungle for so long, does not know it. He and the bumbling Nagasaki pilot do not know what to make of anything. Where are all the post-World War II macho men? The chest thumpers? The tobacco spitters? The cavemen? Ryan is lost.

The humor in the play is delightfully wacky in true Vonnegut style. It begins right at the start of the story when someone says that “this is a simple-minded play about men who enjoy killing and those who don’t.”

The most surreal part of the entire play is the sudden appearance of bouncy, peppy little blonde girl Wanda June, 9 or 10 years old, who was just run over and killed by an ice cream truck and tells everybody what heaven is like (a nice place, to be sure). She pops in and out of the play and is the delicious icing on the cake for this show, especially when she explains that everybody who is anybody is in heaven, even Adolf Hitler and some of his Nazi thugs. Oh, the Nazis love to play shuffleboard in the clouds.

There is a lot of history in the play. As an example, the Nagasaki pilot does a monologue in which he apologizes for killing all those Japanese people in August of 1945. There are a lot of references to crime in New York City n the late 1960s, when the play was written, and the great fear people had of just walking through a city park at night. There is dialogue about disease and fevers in the jungle and the law on when someone is legally dead. There is an interesting chat about people who kill animals on safaris in the ‘60s, when big game hunters were looked upon far differently than today.

The acting in the play, roughly based on Ulysses’ homecoming from the Trojan war, is superb. Jason O’Connell is titanic as, well, titanic Harold Ryan. He stomps and jumps, yells and recoils. He marches up into the audience and down out of it. Others in this marvelous cast are Craig Wesley Divino as Looseleaf Harper, Finn Faulconer as son Paul Ryan, Matt Harrington as Dr, Woodly, Kareem M. Lucas as Herb Shuttle, Kate Maccluggage as Penelope and Brie Zimmer and Charlotte Wise, who alternate as Wanda June.

Director Jeffrey Wise has done a fine job letting both the drama and the comedy play out on stage; he does not let one overwhelm the other. So, a congratulations to him for this superb play and a congratulations to playwright Vonnegut, too, who is surely up in heaven playing shuffleboard.