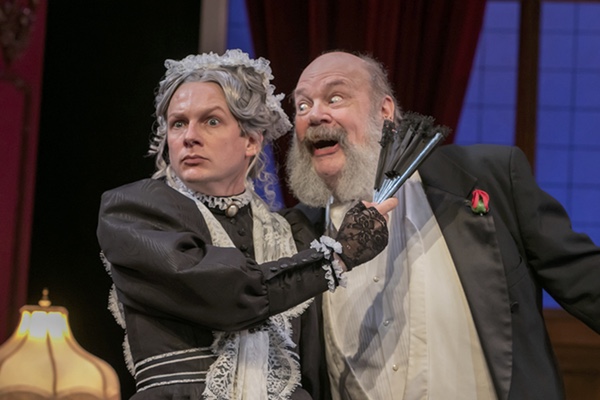 It is 1892 in staid, prim, proper, stiff upper lip England and two Oxford undergraduates, Jack and Charley, want to marry their girlfriends, Amy and Kitty. They are nervous and want a chaperone and, lo and behold, who do they discover is arriving by train that very day but Charley’s aunt from Brazil (“where all the nuts are” she always says), Donna Lucia D’Alvadorez. Perfect. She does not arrive, though and, in a panic, they persuade a very reluctant buddy, Lord Fancourt Babberley (Babbs) to dress up as Donna Lucia so they can carry off their plan.

Babbs, as Donna Lucia, comes out in full, glorious drag and then all hell breaks loose.

Charley’s Aunt, which opened Saturday at the Shakespeare Theatre of New Jersey, at Drew University, in Madison, N, J. is, for lack of a better word, a real hoot. It is hilarious, wacky, totally absurd and yet, at the core, a tender love story between a large group of people connected to each other in some way. It is a reminder, too, that in 1892 playwrights and actors cared as much about the human spirit, no matter what dress it was in, as they do today.

The trouble in the play, written by Brandon Thomas, is that the boys have to get themselves formally engaged and they want to use Donna Lucia as their vehicle to do so. Amy, especially, needs her because her uncle, the very rich and very strict Stephen Spettigue, whose beard and deep voice gives him a commanding presence wherever he goes, insists on written permission from Donna Lucia, the sudden drag queen chaperone. The romp starts here as Donna Lucia maneuvers to get it.

She has her problems, too, and they are named Stephen Spettigue and Colonel Francis Chesney, Jack’s dad, who is broke. He decides he’ll marry rich Donna Lucia and proceeds to chase her throughout the estate. Old Spettigue also falls in love with Donna Lucia and races after her, too. Donna, Francis and Stephen look like the participants in the Kentucky Derby as they pursue each other.

You can imagine the whirlwind of activity all of this causes as Babbs, a 19 year old guy, has to fend off his two male suitors and, at the same time, rein himself in as all these adorable young women are kissing him and rubbing is arms and hands as girlfriends who think he is good old auntie Donna.

It is a very funny and engaging show and you can see why it ran for four years when it opened in England and had another long run on Broadway in 1893.

In the end, all is well that ends well. The finale is sort of predictable, but everybody waits with bated breath for Babbs to whip off his dress, doff his wig and re-emerge as a guy. Or does he?

The play reminds me of the 1959 movie Some Like It Hot, in which Jack Lemmon and Tony Curtis dress up as women and join an all-girl band. They were successful because they did not camp it up – they played the women straight. It was one of the funniest movies of all time. In Charley’s Aunt, Seamus Mulcahy, as Babbs, does the same thing. He is a guy in a dress, not a guy trying to be a girl. Oh, he adopts a girl’s high-pitched voice and gives little tender nods of his head here and there, but he moves like a guy and walks like a guy. He is uproariously funny when, chased by Chesney and Spettigue, he races around the mansion, feet flying and his hands holding up his dress as he keeps a step ahead of his two middle-aged male pursuers. It works and works well.

In addition to the gifted Mulcahy, director Joseph Discher gets really impressive performances from everybody in the cast. They are just about perfect and seem born to play their roles. John Ahlin is marvelous as old Spettigue, chasing Donna Lucia like a 16 year old schoolboy. David Andrew MacDonald is equally good as Colonel Chesney, who really does not care who he marries, as long as she had a lot of money and is shaken when he meets a woman from his past in act two. The two young men, Jack and Charley, are well portrayed by Aaron McDaniel and Isaac Hickox Young. Amy and Kitty are played well by Emily Kiser and Erica Knight. Sally Kingsford plays Ela, Babbs’ old flame, Peter Simon Hilton is the very laid-back butler, Brassett and Erika Rolfsrud plays the mystery woman. Discher does a fine job of acting as a puppeteer, moving his men and women (and, of course, men as women) about the stage.

Charley’s Aunt is what was known as a drawing room comedy. They were the staples of British theater in the 1880s and 1890s. In them, most of the action takes place in the large drawing room of a mansion. The problem with that genre is that it severely limited the action in the play. This production has that same problem, but the speed with which people tumble about overcomes that. The drawing room style faded in the 1920s, productions of plays like Charley’s Aunt waned, too.

You learn a lot about manners and the lifestyles of the British wealthy in Charley’s Aunt, but you learn little of the history of the 1890s era in England. That is a shame because it was an interesting time when everything in England was changing. The 1890s were the last years of the reign of Britain’s legendary Queen, Victoria. In 1890 there was a horrific underground explosion that killed 176 in Great Britain. It was the era of the Sherlock Holmes novels and short stories. There was a financial panic that shook England to its core in 1890. All of these events, and more, should have been referred to in the play in some way, but were not.

I don’t know why the Shakespeare Theatre decided to bring back Charley, and his aunt, but they should be applauded for doing so. The play is great fun.

The next time you walk down a street and see a buoyant middle-aged woman coming the other way and say to yourself, “what a lovely lady,” think again!