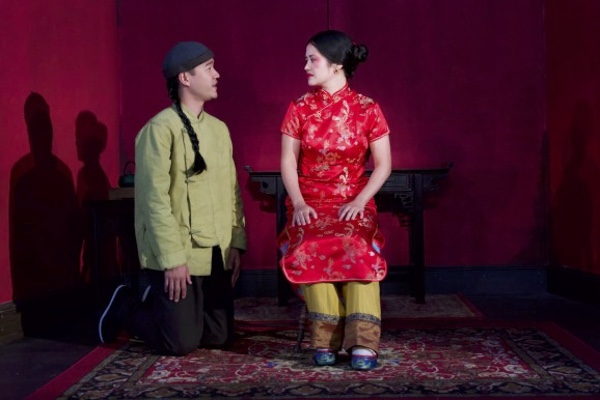 Afong Moy arrived in America in 1834, when she was fourteen, as an entertainment act hired by Nathaniel and Frederick Carnes, brothers who met her in her hometown of Guangzhou, in China, on a trade mission. They convinced her, and her family, that she would serve as an “ambassador” for the Chinese people. There were some Chinese men in the United States that year, but she was the very first Asian American woman. The Carnes really wanted her to be an entertainment attraction. They set her up in a hall on Park Avenue, New York, billed her as the “Chinese Lady,” provided her with a translator, Atung, and sold tickets for a quarter. For your quarter you could listen to her answer your questions about the Far East in Chinese, translated by the trusty Atung, who was never paid for his services, stare at her tiny feet, that she claimed were just four inches in length, kept small by a binding process, and, well, look at her. She was a major curiosity and the hall was packed with visitors.

Her story, at first charming and later pretty foreboding, is the focus of Lloyd Suh’s emotional and impressive play, “The Chinese Lady,” that opened Saturday at the Beckett Theater, Theater Row, W. 42d Street, New York.

Life was good for Afong for years. Her crowds grew, she earned good money and learned to speak English. People, all enchanted by her little feet, liked her. Following her highly successful New York stand, the show toured the country, stopping in many large cities for three or four weeks and was heavily publicized. She met President Andrew Jackson.

As the play unfolds, though, you see a different side of Afong as discrimination against Asians grows in America. She gets Americanized, too, and by the age of 29 she speaks perfect English, smokes and drinks. She does not marry and the show smothers her. Neither she or Atung (secretly in love with her) ever marry. She does not buy a home or settle down. The show is her life. Tired of it, she gets to California as fast as she can when the Gold Rush starts there in 1849. She does not find gold or a better occupation, either.

Legendary showman P.T. Barnum then signs her and she goes to work for him in his New York museum. The museum is jammed with oddballs and freaks and the crowds for the sophisticated and dignified Afong dwindle as the years go by.

Then the play shifts dramatically. Afong leaves the stage and then comes back two years later, five years later, ten years later, all to announce new atrocities against Chinese in China, such as the Opium Wars, the deaths of 150 Chinese workers in the construction of the of the Intercontinental Railroad across the U.S. Chinese are massacred and shot down in U.S. incidents. She mentions the 1871 Los Angeles massacre, in which 500 whites raided Chinatown and murdered 20 there. She also discusses the Rock Springs, Wyoming 1885 massacre, in which white miners attacked Chinese miners and killed 28 and burned down 78 Chinese homes. Afong goes over the details of the 1882 Chinese Exclusion Act, in which Chinese workers were a barred from entering the U.S. The Chinese came to America to find heaven and found hell instead. And so, Afong says as she got older, the Asian Americans drifted away from American society and culture and discovered their own in the various Chinatowns of America. That second part of the play is powerful. I never knew half the atrocities the Asians suffered here. The history in the play is considerable and very detailed, sometimes chilling. It is a disturbing history and one that Americans ignored. After all, they got their silver mines and they got their railroad, right?

The theater provides an academic article on Afong Moy by Professor John Haddad of Penn State, Harrisburg, in the play program, but he just covers her arrival. There is little available in books and magazines about her and playwright Suh pretty much makes up the second half of her story so that he can merge it with political and historical events.

The two actors in the play are really impressive. Shannon Tyo is superb as Afong. She carries herself with great dignity, no matter how much bad news she hears or what unfortunate turns her own life takes. She gets soft and she gets angry. She suffers fools badly and, in her audiences, there are plenty of fools. She exhibits both grace and toughness. Daniel Isaac is wonderful as her translator. He gets a few big scenes and a lot of small ones and does all of them well.

You have to admire the play’s director, Ralph B. Pena. It is hard to keep a two-character play interesting but he does, constantly rushing from year to year and scene to scene and keeping Atung and the Chinese Lady interactive through most of the play.

The play tells you a great deal about history and is a well told tale of a woman hardly anybody knows anything about.