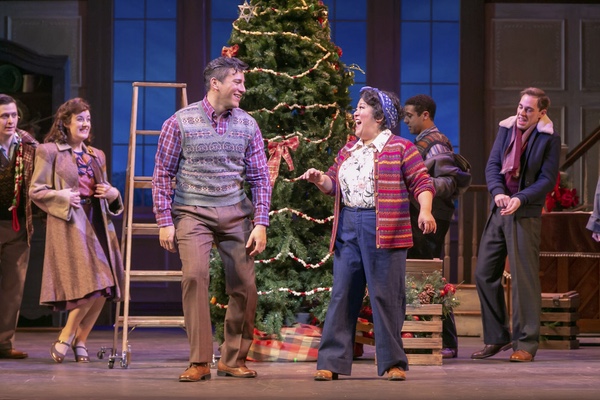 The holidays begin on Thanksgiving weekend and extend through New Year’s day (in department stores they start Jan. 2 and extend through the next January 1) This year the holidays got off to a booming start with a magical production of Irving Berlin’s Holiday Inn, a musical based on the 1942 Bing Crosby movie that opened last night at the Paper Mill Playhouse, in Millburn, N.J.

I think just about everybody has seen the movie, that co-stars dancing king Fred Astaire, on television. It is schmaltzy, ridiculously simple and just plain wonderful. Two years ago, the movie was turned into this musical and debuted on Broadway. Now it is back again, with some small changes, at the Paper Mill, and just as charming.

The story is sheer Hollywood. In New York, singer Jim Hardy breaks up his trio act with dancer Ted Hanover and singer/dancer Lila Dixon, his girl, who is leaving Jim for Ted. They hop on a train and start a national tour and Jim, fed up, moves to Connecticut. He buys a warm, cozy old farm from the Mason family but can’t pay his bills. His housekeeper, the bouncy Louise, suggests he do a show at the farm. He decides on holiday shows. In the middle of all this planning, who rings his doorbell but the daughter of the Mason family, Linda, who is, naturally, gorgeous, lovable and single. Jim and Linda fall for each other and start planning the series of holiday shows.

Meanwhile, on the road, Ted and Lila have split up, Lila marries a Texas millionaire and Ted becomes an alcoholic. He makes it to Holiday Inn and stumbles into their first show, wrecking everything. Now, amorous Ted falls for Linda, who is interested in him because he appears ready to make her his partner and take her to Hollywood, where she can become a big star. She and Jim then start fighting.

In the middle of all this, Jim sits down at the piano and sings his new tune, something called “White Christmas,” with Linda. It is the highlight of the show. Hey, it might be the highlight of musical history.

Berlin wrote 12 songs for the movie, but others, his and other composers, have been added for this show. Among them are hits such as “Easter Parade,” “Heat Wave,” “You’re Easy to Dance With” and “Cheek to Cheek.” The choreography in the musical, by Denis Jones is really splendid, among the best choreographic jobs I have ever seen. The ensemble dance group, that joins the stars in most numbers, is first rate.

The primary reason this show, with book by Gordon Greenberg and Chad Hodge, succeeds is the cast. It is extremely talented. Nicholas Rodriguez, as Jim Hardy, is a gifted singer and actor. Jeff Kready plays dancer Ted Hanover (the Astaire role in the film) and he is a dancing demon. Paige Faure is a delightful Lila Dixon. Hayley Podschun is Linda Mason and she is adorable and has a lovely voice. Others in the large cast include pixyish Ann Harada, who plays housekeeper Louise. She sprints through the show, a smile always on her face, keeping it all together with her mirthful personality.

The play, like the 2016 Broadway version, cuts out the disgusting blackface musical number (minstrels) that was sadly in the movie for so many years (it has been cut out of the television version of the film, thank goodness).

The director, Gordon Greenberg, does a fine job of managing a very big musical with dozens of performers. This is a sprawling play that could easily get out of hand, but under Greenberg’s tight direction it stays focused and succeeds.

You could learn more history in the show. There are some references to train travel, holiday traditions in the ‘40s, radios, and entertainment history in that period, but there could be more. You have a show set in 1942 and there is no reference to World War II? No GIs?

The show does have its problems. First, there are just too many songs (19 here and just 12 in the movie) and a number of them have little to do with the overall story. The director could have cut four or five of them. Second, the plot is a little disjointed. The play runs a good twenty or minutes or so before the “Holiday Inn” aspect of show at the farm sinks in for the audience. Third, this is a show set in 1947, but you would not know it. The musical needs more 1940s references.

These are minor criticisms for this thoroughly delightful Christmas time play. The show is a bag of warm chestnuts over an open fire for the audience. It is different from the movie in some ways, but the heart of its story is the same lovable tale. It is, like White Christmas, It’s a Wonderful Life, A Christmas Story, A Bishop’s Wife and Elf, a story that warm your heart at the holiday season and reminds you how good it is to be alive, especially if it’s snowing and there are carolers wandering through your neighborhood and in the distance you think you can hear Santa’s sleigh whisking through the night.