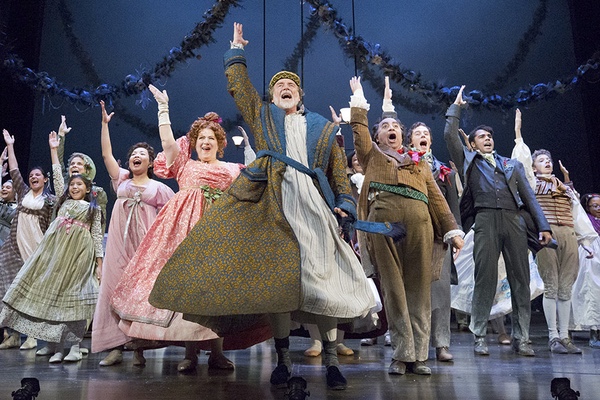 Greg Wood (center) with members of the 2018 cast and community ensembles of A Christmas Carol. Photo by Mark Garvin.

Oh, there are small signs that the Christmas season is upon us. They have lit the tree at Rockefeller Center. Recently chopped down Christmas trees are stacked up in long rows on city sidewalks for purchase all across the United States. The radios are all playing Christmas songs. And television has once again aired the heart-warming movie It’s a Wonderful Life. It is never really Christmas time, though, until Princeton’s McCarter Theater, that grand old gem of a regional playhouse in New Jersey, has staged its scrumptious version of Charles Dickens’ A Christmas Carol. That happened last weekend, so all is now officially right with the Christmas world.

McCarter has staged A Christmas Carol for over 40 years and in each of them thousands of people have thanked Santa first and Charles Dickens second. A Christmas Carol, adapted for the stage by David Thompson, is a play about redemption, generosity and the human spirit, a snow filled saga for all of the admirers of little Tiny Tim out there. It is a great big warm chestnut of a production that is guaranteed to make you weep deeply and laugh heartily about London life in 1843.

Every drama needs a hero and a villain. Here the hero is Bob Cratchit, Tiny Tim’s hard-working dad. The villain is skinflint Ebenezer Scrooge, who has to have the first nickel he ever made in his pocket. Scrooge, a crotchety old bearded businessman always chasing the buck, disdains Christmas and all who celebrate it, no matter if they are the dirt poor Cratchits or his wealthy London family, whose members respect him despite all of his faults.

It is Christmas Eve in merry olde England and old Scrooge is visited by three ghosts of the past, the present and the future. They all take him on the ride of his life over the rooftops and through the cobblestoned streets of London. The first ghost shows him his past, when he was a young man in love with his future bride, and watches her leave the household because he loves money more than her. He visits the Cratchits, a wonderful God fearing family whose little boy Tim, who hobbles about on his lone crutch, is slowly dying. The ghosts take Scrooge on a wild ride on a colossal staircase that swings this way and that across the stage through the holiday night.

The ghost of Christmas present shows him his own family, whose members do not disown their miserly relative at all, as anyone might have.

Finally, there is the somber, ghost of Christmas future. Scrooge is shown his own funeral, with nobody there to mourn his passing, his tombstone that pops up from the stage with a whoosh and the tear filled house where lovable Tiny Tim used to live, before his infirmities took his life.

Irascible old Scrooge is then dumped in his bed, sending his bed covers flying, and awakes to a crisp Christmas morning with a gray hint of snow in the sky. Will he go back to being his loutish old self or start leaping and bounding through the streets of London, a new man with a mission to re-unite with his family, give money to the poor, send huge fat, delicious turkeys to those who struggle and help save  fragile, little Tiny Tim?

Oh, you know what he will do, don’t you?

The play is beautifully directed by Adam Immerwahr. He gets dazzling performances from John Norman Schneider as Bob Cratchit,  Steven Rattazzi as bodacious party thrower Mr. Fezziwig,  Sue Jin Song as Mrs. Dilber,  Zara Lohoue, Paul Deo Jr. and Adele Batchelder as the ghosts, Anne Nathan as Mrs. Fezziwig, and Alexander Perez as the adorable Tiny Tim. The star of the show, of course, is the enormously talented Greg Wood as Scrooge.

They all combine to let you see London in 1843 with its stone streets, gas lit alleys, carriages, horses, food stores, workhouses, prisons and even a den of thieves.

You sense the Christmas spirit of the play when you are met by snappily dressed greeters from 1843 London at the doors to the theater. Dozens of 1843 London city-dwellers race up and down the aisles and the two acts of the play start with Christmas carols, sung in part by the audience. There is Christmas everywhere and then, God bless the director, it snows at the end of the play.

And so a Merry Christmas to all!