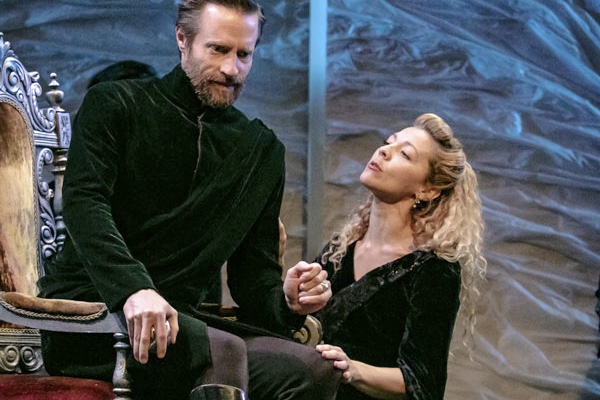 Leontes is a young, handsome King of Sicily and is delighted to have his boyhood friend, Polixenes, visit him for nine months one winter. Leontes should be happy. He is very popular with his subjects, has a lovely wife, Hermione, and a son, Mamillius. What could go wrong?

Leontes is a very jealous man and he decides, for no good reason, that his wife is having an affair with his friend and is pregnant by him. She swears that is not true and that the baby is Leontes’. The Sicilian King then brings in the Oracle of Delphos, who is never wrong, to be the judge. He says Hermione is completely innocent and that absolutely nothing happened between her and Polixenes. People at court who know the pair all agree. That does not satisfy Leontes; nothing does. The King loses all control and howls that the two are lovers. Polixenes leaves Sicily and Leontes orders the baby killed. At the same time, his son dies. The stress of the son and baby is too much for Hermione and she collapses and dies.

Is there enough tragedy in there for you?

That’s the point if the first act of William Shakespeare’s The Winter’s Tale, that is getting a spirited and admirable revival at the Shakespeare Theatre of New Jersey, at Drew University, Madison, N.J.

In the second act the play, that opened Saturday, takes a dramatic turn and becomes a comedy (thank goodness). It now turns out that Leontes changed his mind and had a friend, Camillo, travel to Bohemia, a country with a lot less angst than Sicily, and take the baby with him.

Just about all of the second act takes place in Bohemia in the summer time. It is sixteen years later and the baby girl, Perdita, has grown up to be a beautiful and delightful young woman who is in love with the son of Bohemia’s King, Polixenes.

She was dumped off in a meadow in Bohemia by Camillo and found there by a mirthful shepherd. He and members of his family raised her and it isn’t until she turned sixteen and visitors from Sicily have arrived that all realizes who she really is. What happens now? Does Leontes still want to murder her? Will Polixenes break up the romance?

There is a very famous scene in this play in which a menacing bear rambles across the stage. All directors handle the bear in a different way. In this production, you don’t see the bear, but you hear him growl. Well – this bear’s growl makes the roar of the giant gorilla in Broadway’s King Kong sound like a quiet pussycat with a faint “meow.” Whoa!

The Winter’s Tale, written near the end of the Bard’s life and published in 1623, is not a great play. The plot is a little simplistic and it is long, and I mean long. It is not the plot that makes this play a real triumph at the Shakespeare Theater, but the acting. It is wonderful. You can see that as soon as Leontes steps on to the stage and is joined by Hermione and her friend, Paulina. Everybody does a fine job. I particularly liked all of the shepherds and how they bounded about in the annual Bohemian sheep shearing festival. They gave a real lift to the play. Leontes is impressive as a man who is afflicted by jealousy like some people are afflicted by diseases. It ruins him and, deep down inside, I think he knows it. Hermione is one of Shakespeare’s great female characters. She is soft at times, hard-nosed at others. She is always virtuous and kind, a perfect man’s wife and monarch’s Queen.  Polixenes is the good friend everyman has who likes you for reasons that are unexplainable. Paulina loves her friend Hermione and just cannot believe the jealousy of the King and how that brings down her friend. Daughter Perdita, whom we meet at 16, is the kind of lovable golden haired teenager we all know from some time in our lives and liked. The other characters in the play, such as Camillo, are sturdy. For me, this around three hour play flew by like in was ten minutes long.

Director Bonnie J. Monte has done a fine job of bringing this play, that can be stodgy, to life and takes us all to the sunny seacoast of Shakespeare’s Bohemia for a delightful evening in the theater. She gets fine performances from Jon Barker as Leontes, Erin Partin as Hermione, Patrick Toon as Camillo, Marion Adler as Paulina, and Ames Adams as the old shepherd, Ryan Woods as Florizel, Polixenes’ son, and John Keabler as Polixenes. The rest of the cast works well with them.

We are off to a cold winter. Two feet of snow fell on parts of Virginia over the weekend. Here in the metropolitan area we had seven inches of snow last week. When I woke up yesterday it was 28 degrees. There is nothing better to warm you up this cold winter than this production of The Winter’s Tale. bears and all.