The California Girl is Still Clueless 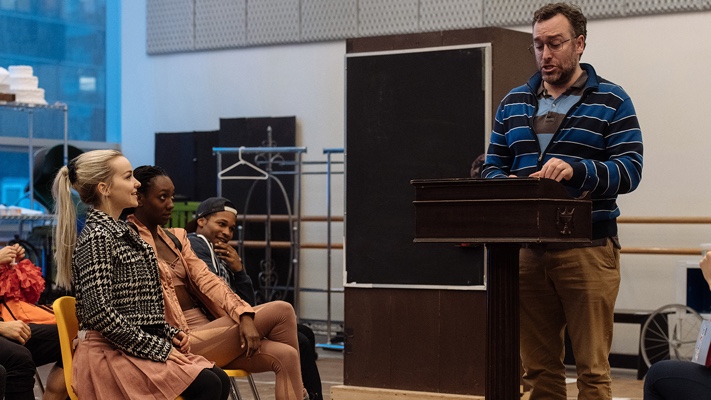 Cher is a cute 16-year-old blonde girl who is ridiculously wealthy. She lives in a Beverly Hills mansion, is the daughter of a high-powered lawyer. has gorgeous clothes, parties hearty all week long, shops ‘til she drops (at Gucci, of course) and has lots of friends. She gets people to hook up and is the tidiest little matchmaker you ever saw. She is clueless, though, in finding love herself. How do you do it?

Cher, a valley girl if there ever was one, was the star of the smash 1995 movie Clueless, one of the first great teen movies of the era, and is back again, this time as the star of the musical Clueless, that just opened in New York at the Pershing Square Signature Center, 480 W. 42d Street.

The musical Clueless, written by Amy Heckerling, who directed the movie, is a whole lot of fun. It is the ageless rites of passage story for people who go from 12 to 21 real, real fast. Cher’s rite-of-passage, like everyone’s. is a bit bumpy. She falls head over heels, or rather earphones over earphones for Christian, a gorgeous, teenaged guy who puts the wind in her sails. Except that, er, Christian is gay. He’s out. She stumbles and bumbles around, continually trying to get advice and support from her stepbrother Josh, who is visiting. In the end, she falls in love with Josh, who is as down to earth as her friends are in outer space most of the time.

The play’s heroine Cher is the same out-of-it, pretty ditzy teen from the 1995 movie. She is convinced she can match up everybody. The plot of the play is her failure at matching up herself with anybody. It works and works well whether in Beverly Hills, California or Lexington, Kentucky.

Director Kristen Hanggi does a fine job handling the large cast and creating a 90’s atmosphere. The choreography by Kelly Devine is simply superb, some of the best I have ever seen. The ensemble cast does a wonderful job with the music and dancing.

The highlight of the show are the car driving scenes. In one, a guy is giving his girlfriend lessons on how to drive (we all remember how that went) and in the other Cher is taking her first driving test. It is hilarious and yet another reminder that when you see a teenager pull out of the garage in the family car, get back inside and hide under the bed.

After the car tests fiasco, a friend yells at her that her problem in life is that “you’re a virgin who can’t drive.”

The play has some minor problems. One is that except for one or two songs, the tunes in the show all sound like each other. They are the melodies of actual ‘90s songs with lyrics adapted for the show. If you have heard one, you have heard them all on both AM and FM. Few of them are terribly interesting.

Another small problem is the set. It is pretty spartan. It is also too small. This is a big play, with lots of performers and musical numbers. They work well on the set, but it would look better in a bigger theater. What saves the set is the enormous projection screen on the back wall on which films of outdoor scenes are shown so you can, as an example, watch people driving down a palm tree lined street.

The history in the play, based a little on Jane Austen’s novel Emma, is good and it sort of reminds you of the TV series 90210. It is light on politics and heavy on social. What I adored was watching the show for things from the 90s that you just don’t see anymore, such as the guy walking by listening to one of those gigantic “boom box” radios.

Director Hanggi gets several superb performances in the show. Dove Cameron plays the adorable Cher and she dominates the show from its first minute until its last. She is a fine singer and good dancer, but what makes her so lovable is her human vulnerability and charming stage persona. You see her do all of these stupid things and you have to love her for them. Other good performers in the show are Ephie Aardema as Cher’s friend Tai, David Thomas Brown as her down to earth heartthrob Josh, Chris Hoch as dad and the high school teacher, Will Connolly as the lost-in-space Travis and Justin Mortelliti as Christian.

The show’s theme is that while teens in the 1990s, and today, may seem stupid, they are lovable. Yes, they are (most of the time).

Catch Clueless. You will have a good time and be clueless no more.