The Holocaust and the Christian World

Patrick Henry is Cushing Eells Emeritus Professor of Philosophy and Literature at Whitman College. He is the author of We Only Know Men: the Rescue of Jews in France during the Holocaust (2007) and the editor of Jewish Resistance Against the Nazis (2014). 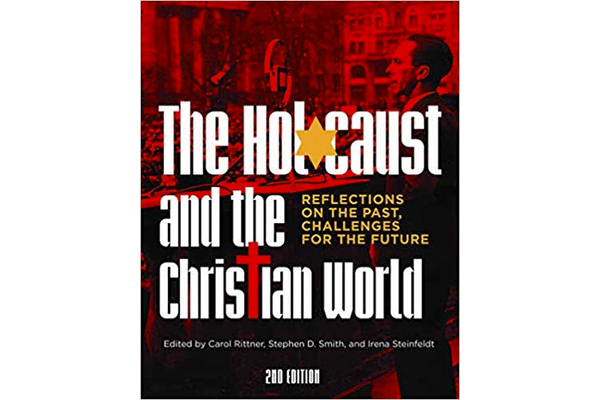 Holocaust scholars were stunned last year by the results of the April 2018 survey of Americans and the Holocaust, according to which, 31% of all Americans believe that two million or fewer Jews were killed during the Holocaust, while 41% of Americans cannot say what Auschwitz was. Additionally, 22% of millennials (ages 18-34) “haven’t heard” or “are not sure if they have heard of the Holocaust.” Other survey questions concerning the names of countries where the Holocaust took place, the names of ghettos and concentration camps, and the persistence of antisemitism also yielded low awareness rates.

Simultaneously, a recent FBI report shows that hate crimes in the U.S. spiked 17% in 2017 alone—the third straight rise in as many years. The worst anti-Semitic attack in U.S. history---the murder of eleven people at the Tree of Life Synagogue in Pittsburgh occurred in November 2018.

The arrival of the second edition of The Holocaust and the Christian World: Reflections on the Past, Challenge for the Future, couldn’t be more timely. Its contributors are among the leading Holocaust scholars of their generation. The editors, emblematic of the ecumenical nature of this ethical undertaking, include Carol Rittner, a Catholic nun and distinguished professor emerita of Holocaust and Genocide Studies at Richard Stockton University; Stephen D. Smith, the Protestant co-founder of Beth Shalom, Britain’s first Holocaust Memorial, and current executive director of the USC Shoah Foundation; and Irena Steinfeldt, a Jewish educator and former director of The Righteous Among the Nations Department at Yad Vashem in Jerusalem.

The Holocaust and the Christian World is divided into nine sections: Confronting the Holocaust; Chronology, 1932-1998; Anti-Semitism; The Churches and Nazi Persecution; The Reaction of the Churches in Nazi-Occupied Europe; The Vatican, the Pope, and the Persecution of the Jews; The Challenge of the Exception (the Rescuers of Jews); After the Holocaust: How Have Christians Responded? (Activities and Issues); and, finally, the Afterword. Each section is made up of severalshort, stimulating articles that go directly to the issue at hand and offer suggestions for further reading as well as questions for reflection.  For example:

--“What would have happened if the Churches—Protestant and Catholic alike—had defied Hitler during the Third Reich and stood in solidarity with the Jews?”

--“When does silence become an active form of collaboration?”

--“What should it mean—and not mean—to be a post-Holocaust Christian?”

--“How can we help people to develop faith without prejudice?”

--“What obligation do we have to stand up for people whose beliefs we do not share?”

--“Who is part of your universe of obligation today?”

The Afterword  contains documents related to church matters during the Holocaust from Norway, Greece, France, and Denmark; post-Holocaust statements from the churches in Switzerland, Rome, United States, Hungary, Germany, Poland, France, and Austria; the text of the March 1998 Vatican Statement, “We Remember: A Reflection on the Shoah;” an updated videography and detailed list of on-line sources; and, finally, a select bibliography not contained in the first edition with appropriate entries through 2017.

Two impulses drive the text from beginning to end: the frank admission of the role played by Christianity in the Holocaust and the current project of completely ridding Christianity of all anti-Judaism. Carol Rittner and John Roth elucidate the history and Christian roots of anti-Semitism (“the longest hatred of human history”) found in the New Testament and suchearly Church Fathers as Saint Augustine and Saint John Chrysostom, as well as in later Christian preachers and theologians, such as Bernard of Clairvaux and Martin Luther. The authors describe the institutional anti-Judaism of Christian churches, the negative depiction of the Jewish people in Christian preaching and liturgy, and the process by which the Jew became “the other”—“marginalized, persecuted, blamed for every woe, from unemployment and slums, to military defeats and unsolved murders.” In addition, they present a chilling chart that lists Nazi measures on the one hand and prior Canonical Laws on the other, for example, “Nazi Measure: Law for the Protection of German Blood and Honor, September 15, 1935 (Canonical Law: Prohibition of intermarriage and of sexual intercourse between Christians and Jews, Synod of Elvira, A.D.306); Nazi Measure: Book Burnings in Nazi Germany (Canonical Law: Burning of the Talmud and other books, Twelfth Synod of Toledo, 681);  Nazi Measure: Decree of September 1, 1941—the Yellow Star (Canonical Law: The marking of Jewish clothes with a badge, Fourth Lateran Council, 1215).

After centuries of being “cast outside the universe of moral obligation,” it is not surprising that most churches and most Christians were indifferent to the fate of Jews during the Nazi plague. In the words of Pope John Paul II, “their history had ‘lulled’ their consciences.” Although this volume clearly states that Christianity cannot be seen as the cause of the Holocaust, it does convince the reader that Christianity prepared the way and then allowed it to happen. As a result, the authors accept the Shoah as part of Christian history. The enormity of Christian responsibility means that the Holocaust can no longer be conceived of as solely what happened to the Jewish people but rather what also happened to Christians who claimed to be disciples of a Jew named Jesus.

Having clearly established the anti-Jewish bias of traditional Christianity, the text then moves to the contemporary task of ridding Christianity of its anti-Judaism. It explains what has been done since 1945 and what still needs to be done. The book’s authors offer several strategies to strengthen the dialogue between Christians and Jews. For example, Stephen Smith wants Christians to take an active part in the remembrance of the Shoah, given that the perpetrators, collaborators, and bystanders were not Jewish. To foster, Tikkun (Healing), Marcia Sachs Littell stresses the importance of developing a Christian liturgy on the Holocaust and the faithful observance of Yom HaShoah (the Day of Holocaust Remembrance) by the joint Christian-Jewish community.  Michael Phayer, Carol Rittner, and Isabel Wollaston call for the development of Holocaust education and courses in Hebrew Scripture and post-World War II Jewish-Christian relations in Christian seminaries, colleges and universities. They also suggest a moratorium on terms such as “Old Testament” which implicitly connote Jewish displacement.

Although the contributors to this book do not hesitate to analyze factors that led to specific historical events, even identifying particular individuals in positions of responsibility, The Holocaust and the Christian World is never excessively accusatory. To learn retrospectively what should have been done by churches and individual Christians during the Holocaust is not tantamount to knowing what we would have done had we been in their place. This wisdom permeates the text whose authors recognize that their responsibility and ours lies in the present, in the creation of a world where another Auschwitz would be unthinkable.