This article is based on B.Z. Khasru's upcoming book, "One Eleven, Minus Two: Prime Minister Hasina's War on Yunus and America." He previously authored: "Bangladesh Liberation War, How India, U.S, China and the USSR Shaped the Outcome,” and “The Bangladesh Military Coup and the CIA Link." 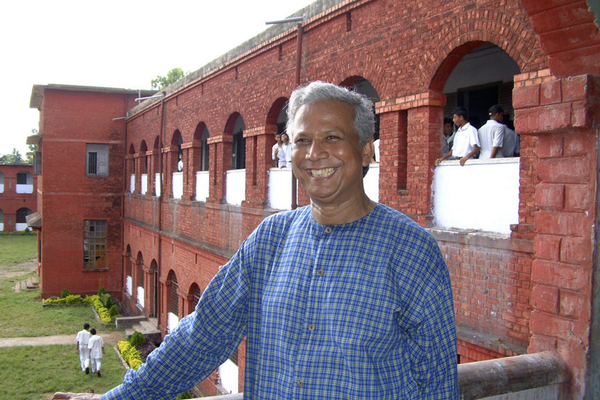 Two popular myths have been swirling around the world as to why Prime Minister Sheikh Hasina of Bangladesh declared war on Nobel prize winner Muhammad Yunus. Hasina ignored Moriarty's request and ousted Yunus in 2011 when she won a legal battle to kick out the micro-loan guru from the Grameen Bank.

First, Yunus conspired with the powerful military to exile the nation's top two politicians, while prepping himself to enter politics; second, Hasina felt jealous because Yunus won the Nobel prize that she believed she deserved for her role in ending a decades-old tribal insurgency.

In fact, neither one was the direct cause of the Hasina-Yunus duel. The Awami League, the political party led by Hasina, put Yunus in the dock long before he made public his political ambitions or won the Nobel.

Abdul Jalil, general secretary of the Awami League, publicly refused to accept Yunus as non-party interim government chief to supervise parliament polls a month before he received the prize and five months before he revealed his intention to get involved in politics.

Jalil's comments came a day after Yunus told a civil-society forum in Dhaka, the Bangladeshi capital, that he would be pleased to be the chief adviser of the caretaker administration. Jalil not only dismissed the possibility, but also opposed the Grameen Bank founder's ideas to reform Bangladesh's governance.

Awami League's bellicose attitude toward Yunus partly resulted from information Hasina received from India. New Delhi and Washington were on the same page regarding Bangladesh on almost every issue, except for one: India opposed giving the theocratic Jamaat e-Islami party political space in Bangladesh. But the United States feared that Jamaat might turn highly radical if it was pushed underground. Delhi was also worried that Washington wanted Yunus to replace Hasina, a staunch Indian ally.

Rumors were rife in Dhaka in December 2006 that America wanted neither Hasina nor former Prime Minister Khaleda Zia to win the election set for 2007. Mohan Kumar, joint secretary for Bangladesh at India's foreign office, told a U.S. diplomat in New Delhi that sources continued to report that the United States was positioning the 2006 Nobel prize winner to run in the election. He said Bangladeshi elite speculated that America "fixed" the award for the U.S.-trained economist.

According to Kumar, people in Dhaka suspected that the United States arranged for Yunus to win the prize to enhance his political credentials. Although Kumar did not subscribe to the allegations, still he wanted Washington to know that the rumors were alive in Dhaka.

The United States and India had a common understanding on Bangladesh policy, but New Delhi was still concerned about Washington's "lack of conviction" regarding Jamaat's links to terror, Kumar said. He added that India "does not understand" American view that entry into the political mainstream would moderate Jamaat. Further, he observed, America was biased toward the anti-India Bangladesh Nationalist Party, headed by Zia, and Jamaat. He noted that "the Bangladeshis are very aware of it."

Hasina perceived Yunus to be a Zia supporter, even though Yunus denied having any links with any political party. Her suspicion deepened in 2006 when she learned that Yunus had been nominated by the BNP to be an adviser of the interim government.

Hasina found Yunus' close link with America problematic, too. She told a cabinet meeting that Yunus was engaged in a conspiracy to undermine her government with help from his American friend, former Secretary of State Hillary Clinton.

Yunus faced Hasina's direct wrath after she returned to power for the second time in early 2009. He had long desired a change in the law that gave the government control over the appointment of the bank chairman. The immediate-past interim regime had amended the ordinance to transfer the power to the bank's board of directors. But the constitution required that parliament must approve the amendment.

He was clearly worried, because of her negative attitude toward him, that Hasina might oppose the parliamentary approval. So he sought assistance from her colleagues. Despite support from several cabinet members, the prime minister refused to ratify the change. Yunus, a naturalized American, then approached the United States for help.

On 10 May 2009, Yunus sought the U.S. ambassador's input on the best way to request Hasina to reconsider her refusal. The envoy pledged to arrange for the beleaguered banker a meeting with the prime minister and put in a good word to her for him. Yunus talked with Ambassador James F. Moriarty after a meeting with Clinton in Washington a month earlier when he discussed his problem with the prime minister. Hasina ignored Moriarty's request and ousted Yunus in 2011 when she won a legal battle to kick out the micro-loan guru from the Grameen Bank.

Hasina was further miffed by Yunus when he said that 8.3 million Grameen Bank members – who represented forty million Bengalis, or twenty-five percent of the nation's total population, according an estimate by Yunus – were not only citizens but also voters. This was a veiled threat that these voters could punch a mega hole in the Awami League's ballot box.

Her rage at Yunus stemmed also from the professor's public criticism of politicians as corrupt. Soon after winning the Nobel, Yunus said, “political leaders should give up revengeful politics and spiteful activities to offer a better political environment to the nation.” Yunus believed that the political system was hindering Bangladesh's progress. He offered an alternative agenda and announced his plan to start a political party, drawing a sharp public rebuke from Hasina.

The question, however, remained if Yunus wanted both Hasina and Zia out of politics, why didn't Zia go against the Nobel laureate? Zia instead urged Washington and London to protect Yunus from Hasina's fury. Zia's sympathy for Yunus cemented Hasina's impression that the micro-finance guru was in bed with Zia, politically speaking, and doomed the banker. Yunus' hobnobbing with the military and flirting with the idea of entering the messy world of Bengali politics were the last straw that broke the camel's back.